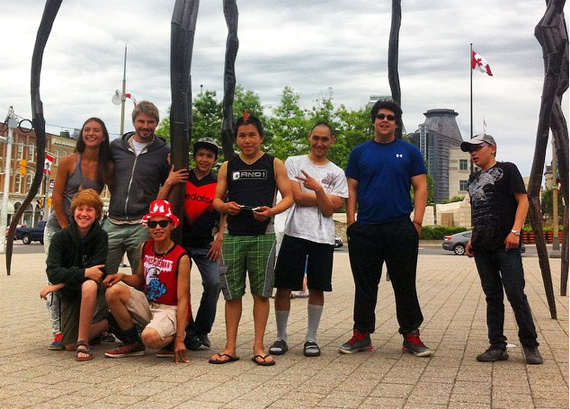 Audi Qinnuayuaq, Latch Akesuk, Cie Taqiasaq and Parr Etidloie pose with Alexa Hatanaka, Patrick Thompson and project chaperones outside the National Gallery of Canada earlier this week, where they visited works of art created by elders from Cape Dorset. (IMAGE COURTESY OF THE PA SYSTEM) 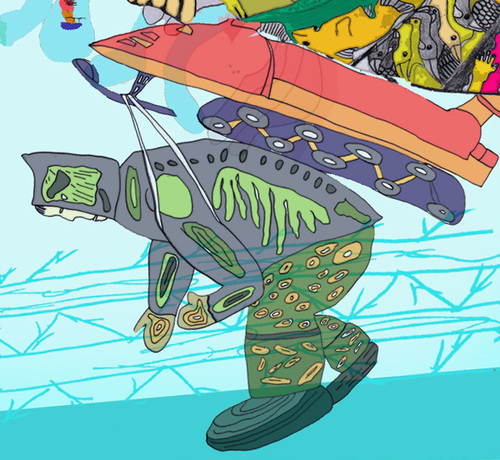 This is the image created by a group of young Cape Dorset artists that will be painted on a wall in downtown Toronto. (COURTESY OF THE EMBASSY OF IMAGINATION)

It’s been a whirlwind experience these past few weeks for the people behind Piliriqatigiingniq, a giant mural project that will bring Nunavut youth to Canada’s largest city this month.

First, the two-storey mural wall secured in downtown Toronto by artists and project leaders Alexa Hatanaka and Patrick Thompson fell through at the last minute.

That set off a flurry of phone calls and in the process, a media campaign to try and find a back-up canvas for the four Cape Dorset youth to paint on.

“We ended up having to scramble for seven days, but we found one with two days to go,” said Thompson, who, along with Hatanaka, make up the Embassy of Imagination.

In the end, the owners of a youth hostel just a block away from the original wall donated a 60-foot-high space on the side of the hostel.

“It’s the perfect symbol for us,” Thompson said. “It’s a place where people come together from one place to experience a new place.”

Days later, Thompson and Hatanaka were in Ottawa to welcome the four young artists who helped design and will bring the Toronto mural to life — Audi Qinnuayuaq, Latch Akesuk, Cie Taqiasaq and Parr Etidloie.

The group spent this week visiting the nation’s capital, sketching and drawing along the Rideau canal and visiting the National Gallery of Canada, where they got to see works of art their own grandparents had painted.

Now the group is en route to Toronto, where they’ll get to see their giant canvas for the first time.

The image that will be applied to it is a larger than life image of one the boy’s grandfather carrying a broken-down snowmobile on his back through the streets of Cape Dorset.

Sixteen-year-old Parr Etidloie, whose grandfather is pictured in the image, thought it made for a good story.

That image will be surrounded by just about every sort of wildlife you can find in the Arctic, Thompson said.

“Everyone we’ve shown it to has been blown away,” Thompson said. “And I think once it’s painted to scale, these guys will be blown away by what they’ve accomplished.”

Qinnuayuaq, Akesuk, Taqiasaq and Etidloie will be joined by three Toronto high school student artists who will help sketch the image projected onto the wall, and then help fill in the colour with brushes and rollers.

The mural is expected to take about 10 days to complete, Thompson said.

The project is funded by Mural Routes and the Nunavut Arts and Crafts Association, Canada Council for the Arts, the federal department of Canadian Heritage and StreetARToronto.