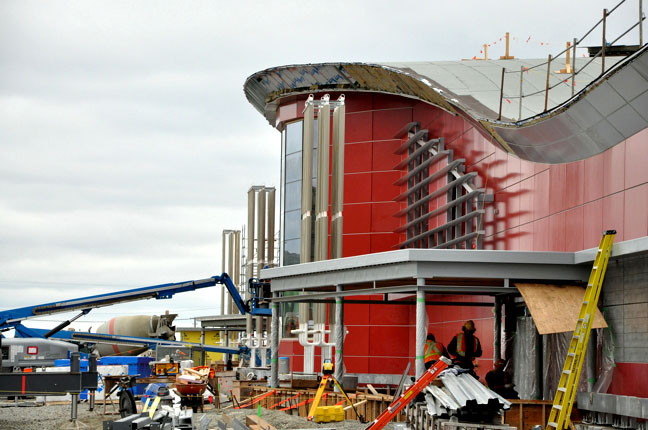 Iqaluit’s new air terminal building, part of a big makeover of the Iqaluit airport that’s expected to be completed by July of this year. (FILE PHOTO) 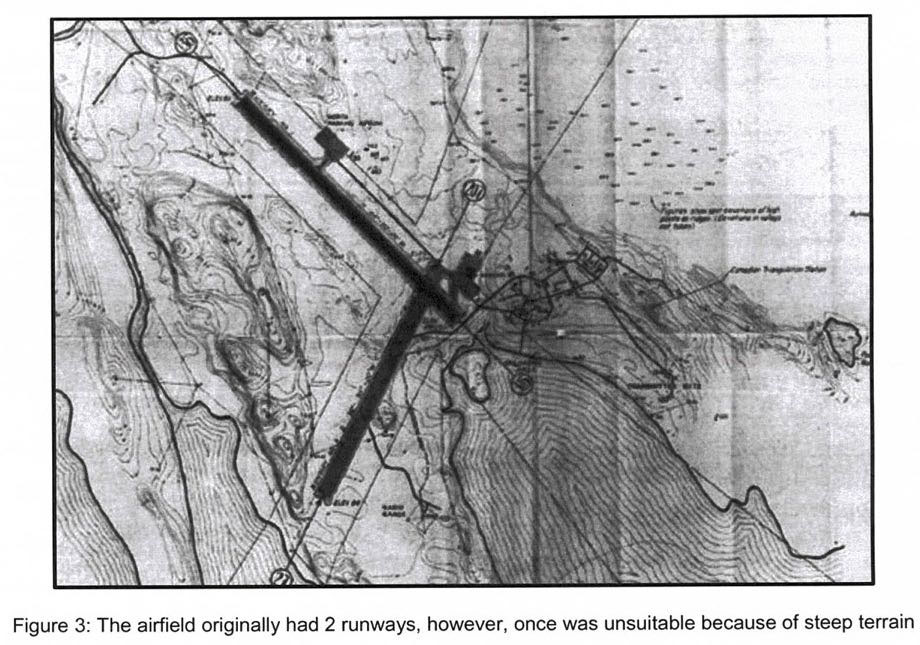 This old map illustrates the two runways that comprised the original version of the Iqaluit airport.

A group of engineers want to recognize Iqaluit’s airfield for the trailblazing ingenuity required to build it and its lasting impact on history and on northern infrastructure, in a government-backed pitch to label the airport as a historic site.

The limited window of time for transporting materials a distance of nearly 3,000 kilometres, along with the unprecedented engineering feat in 1942 of building a major landing strip on permafrost, were landmark hurdles in the field of airport design, says the group’s nomination form, written by Stantec engineer, Ken Johnson, in February.

“The Iqaluit airfield remains important on a regional aviation scale as a gateway to the Eastern Arctic, and on a global aviation scale because of the polar routes to Asia and Europe,” the nomination said.

The airfield will get a commemorative plaque celebrating its engineering and historical significance if it’s officially recognized.

“The Iqaluit airfield has a unique history, and has played significant and rapidly evolving roles in world affairs and international air travel,” the Iqaluit International Airport director, John Hawkins, said in a written endorsement.

The origin of Iqaluit’s airfield goes back to the darkest days of World War II.

By 1941, transatlantic shipping from North America to Europe was crippled by Nazi Germany’s fleet of submarines, which attacked ships suspected of ferrying supplies—such as fighter aircraft—to Allied forces.

The solution was to avoid the “Battle of the Atlantic” entirely: constructing a network of northern airfields that planes could “leapfrog” across to reach Europe—known as the “Crimson Route.”

Central to that plan was a level meadow in Baffin Island, selected by the American military surveying the Frobisher Bay region as the last rest stop en route to Greenland and Europe.

Almost overnight, a top-secret base of engineers and military personnel set up shop in what was to become Iqaluit, constructing two runways—only one survived to the present day— a hospital, a sealift area and staff housing on a site dubbed “Crystal II.”

The success of the Crimson Route ensured Allied forces had supplies and vehicles to continue fighting, and by 1943 Adolf Hitler’s focus shifted away from the Atlantic.

The United States sold the airfield to the Canadian government for $6.8 million in 1944 but American forces returned to the site in the 1950s as part of early detection forces against an “over the top” attack from the Soviet Union.

By 1949, the airfield was enough of an economic draw to convince the Hudson’s Bay Co. to move its trading post in Ward Inlet about 10 kilometres closer to Niaqunnguq, or Apex, for better access to the base.

By 1957, 1,200 people called the community home including 489 Inuit who lived a short distance from the military base.

In the decades that followed, Iqaluit, or Frobisher Bay, moved away from its military roots—one of the few Canadian communities with entirely military origins—into a shipping and commercial hub of the Eastern Arctic.

But central to every stage in the region’s modern history has been the airfield—Iqaluit’s lifeline to the rest of the world.

“[The airfield] has been instrumental in shaping Canada’s North and the present day Nunavut territory,” Hawkins said.

Iqaluit’s new airport terminal, scheduled to open its doors this summer, will form the next stage in the airfield’s evolving history.