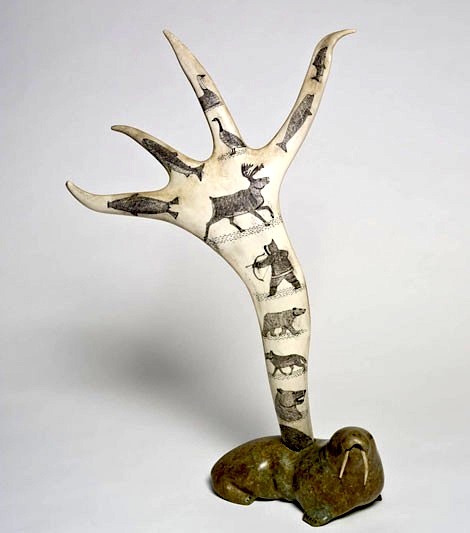 Caribou Antler on Walrus Base, carved by the late Cape Dorset artist Davidee Itulu, is part of the WAG’s permanent collection. The gallery holds the largest collection of contemporary Inuit art in the world. (IMAGE COURTESY OF WAG)

A renewed partnership between Nunavut and Manitoba promises to raise the profile of Nunavut art — at its new Winnipeg home, and across the globe.

As part of a five-year deal, the two governments will spend $1 million to move thousands of pieces of Inuit art — much of which have been in storage for years — to the Winnipeg Art Gallery.

There, the gallery will use its resources to exhibit and make digital photos of the pieces.

“It’s huge, because it allows us to build bridges and links to better connect us to the North,” said Stephen Borys, the gallery’s director and CEO.

The Winnipeg Art Gallery is already home to 14,000 pieces of Inuit art, the world’s largest contemporary collection of Inuit art.

Under the Nunavut-Manitoba MOU, it will be receive more than 7,000 pieces, on loan from the Government of Nunavut over a five-year period.

The big Nunavut collection will see the light of day after sitting in storage at facilities in Yellowknife, Gatineau, Toronto and Iqaluit.

“This is really the first time that people will get a chance to see it,” Borys said.

“This is probably one of the most unique collections in the world, because it was built by the people of Nunavut,” Borys said. “It tells a story like no other collection.”

With the governments of Manitoba and Nunavut each putting $500,000 into the project, the WAG will have the means to study the works, put them on display and digitize them.

Borys said the gallery hopes to apply for more funding in order to tour exhibitions. Already, WAG is planning an exhibition of tapestries for next spring and Borys said there’s been interest in France and Germany to host shows.

About half of the WAG’s 24,000 works of art, roughly half of them, were produced by Indigenous Canadian artists, the majority of whom are Inuit.

It’s a natural relationship, Borys said, given Manitoba’s proximity to Nunavut, and the large Inuit community living in Winnipeg.

Borys said the high level of per capita art production across Inuit Nunangat is “unique in the world.”

Eventually, however, those 7,000 pieces will make their way home to Nunavut once the GN builds a facility to house them.