Inuit fashion with a contemporary twist: that’s Martha Kyak’s motto. These pieces are just a few examples from her vintage-inspired collection shown at a Toronto fashion show this past spring. (PHOTO BY TRACY LYNNE) 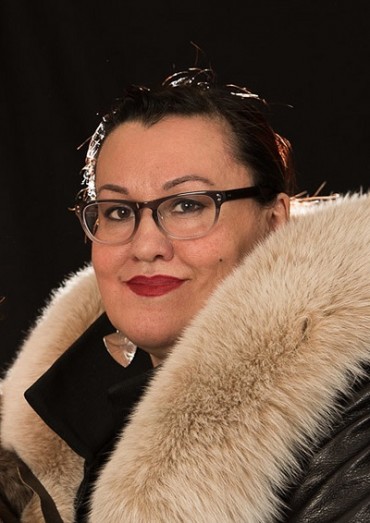 When many Ottawa residents—including Kyak—lost power last weekend after several devastating tornadoes blew through the Canadian capital, the Pond Inlet designer and teacher at Nunavut Sivuniksavut packed up her sewing machine and drove to spend the weekend with a friend who still had power.

From Friday through Monday, she worked cutting patterns and sewing garments for an upcoming art, music and fashion show at Algonquin College on Saturday, Sept. 29, where students from Nunavut Sivuniksavut will model designs from Kyak’s personal fashion brand, InukChic.

“I was less stressed when I was able to sew,” she said. “I’ll keep sewing until the show goes on.”

Eleven models will be showing Kyak’s work this weekend. That will include some new pieces she is keeping tight-lipped about until the debut night.

But she would say that some of her recent works are inspired by vintage designs from the 1920s and the 1960s, and that upcoming creations will target a younger audience.

Those vintage-inspired works include a series of floral parkas she dreamed up for a spring fashion show in Toronto.

She called the long winter coats with fluffy fur trim both “feminine” and “elegant,” but said that if you have ever seen beadwork on an amauti or on caribou skin, you’ll know that using floral designs in clothing made by Inuit is far from a new concept.

Kyak started focusing on her sewing as a career when she moved to Ottawa in 2010.
“It started with sewing parkas,” said Kyak, who is working hard to expand her brand that merges traditional Inuit clothing with modern, contemporary fashion.

“I’m mixing the two, so you’ll be seeing that and more of the designs I like that are not traditional at all,” she said.

“Legacy” is the theme of the fifth annual Indigenius Art Music and Fashion Show 2018. It’s the second time Kyak is taking part in this show, as one of four Indigenous designers.

But it goes beyond fashion. Arviat’s Shelton Nipisar, a student at Nunavut Sivuniksavut, is bringing his dance moves to the stage as well.

The event looks to show youth that they can have a voice that is all their own, said Kyak, adding that mainstream media is filled with stories about residential schools, suicide rates among Indigenous communities, and the National Inquiry into Missing and Murdered Indigenous Women and Girls.

“We don’t want to be remembered for the negatives,” Kyak said.

That’s what the theme means by legacy.

“It’s to show there’s more than what we hear on the news,” she said. “We want to be remembered as entrepreneurs, as designers, as musicians.”