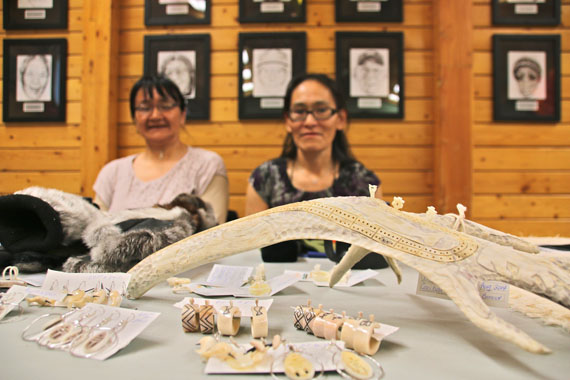 Kidlapik Paniloo of Taloyoak and Alina Tungilik of Kugaaruk sell their homemade traditional merchandise at the 4th annual art market in Cambridge Bay as part of the 15th annual NACA arts festival. (PHOTO BY KELCEY WRIGHT) 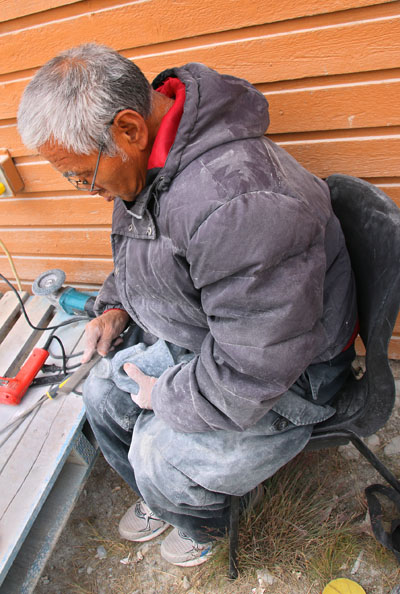 Simon Oleekatalik of Taloyoak, works on a carving outside of the community hall in Cambridge Bay before the sales market begins. (PHOTO BY KELCEY WRIGHT)

Kidlapik Paniloo and Alina Tungilik sat at a grey, plastic table full of traditional jewelry, carvings and gloves for sale on the afternoon of August 25.

“I’ve seen it take place in Iqaluit, but this was a good chance to get the Kitikmeot region’s artists involved.”

The Nunavut Arts and Crafts Association held the 15th annual arts festival in Cambridge Bay from Aug. 19 to Aug. 26.

Artists of all ages from across Nunavut gathered together to take part in the week-long festival and sales markets.

“Each day has been fun,” said Paniloo, who has been beading and crocheting for over two decades. “What I liked most was the workshops with the younger artists.”

This year the council sought out young artists in Nunavut communities to begin its first mentor program.

“Artists really appreciate the chance to meet other artists and learn from one another,” said Pascale Arpin, the NACA’s communications and special projects advisor.

NACA, a not-for-profit organization, last held a festival in Cambridge Bay in 2001 and added a brand new workshop to their schedule this year.

The series of four exploration workshops were added to allow artists to try new techniques and work with different materials.

“I just kept thinking, how do we get these artists to push their boundaries,” said Arpin, who has been to three NACA arts festivals.

The council that Arpin is involved with made a short animation video with some of the art produced during the week and taught the Nunavut artists how to use new technology and materials, but still conserve the traditional artwork.

“The animation workshop blew my mind,” Arpin said. “I want to see more of that in our communities.”

Not only were the workshops successful, Arpin says the entire week went even better than expected.

“The success of the festival was contingent on the help that we received from all across Nunavut,” said Arpin. “We couldn’t have done it without them.”