Nunavut coroner absent from inquest but apologizes to family for “miscommunication” 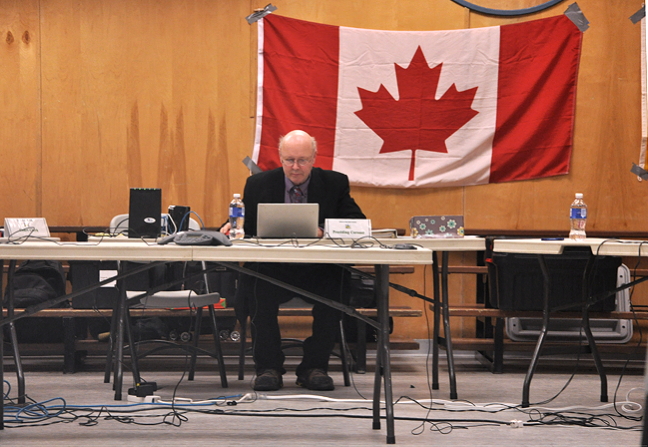 NWT coroner Garth Eggenberger, who is presiding over a coroner’s inquest in Cape Dorset into the 2012 death of three-month-old Makibi Olayuk Akesuk, said Nov. 22 that despite protests from the coroner’s lawyer, questions about the actions of Nunavut Chief Coroner Padma Suramala after the baby’s death should be allowed. (PHOTO BY THOMAS ROHNER)

CAPE DORSET—The Nunavut coroner’s office will set up a committee to review all deaths of Nunavut children under the age of five, a statement from Chief Coroner Padma Suramala said Nov. 22.

Suramala made the announcement in a written release issued on the first day of the coroner’s inquest into the death of Makibi Olayuk Akesuk in Cape Dorset.

The inquest will look into the baby’s April 2012 death to determine the circumstances around the death and to make recommendations aimed at avoiding similar deaths in the future.

“This committee process brings together people from multiple disciplines in order to comprehensively discuss the circumstances surrounding the death of any child under the age of five years old,” Suramala said.

The committee will look at trends and risk factors, “to assist in the development of preventive measures and/or the improvement of systems and policies.”

Although she issued the statement, Suramala did not attend the inquest, expected to run until Nov. 25.

Suramala also said there were “miscommunications” in the way she handled Baby Makibi’s death, which caused “distress in an already unimaginable situation.”

“I apologize for adding to [the family’s] sorrow.”

Suramala said in her statement that her office plans to implement two other policy changes because of Baby Makibi’s death:

• contact families directly to inform them of the cause of death and the investigation into a death; and,

• not release any preliminary autopsy results while tests are still pending.

The baby’s mother, Neevee Akesuk, testified Nov. 22 that in a conference call with Suramala after the infant’s death, the coroner said the baby died of Sudden Infant Death Syndrome, or SIDS—a mysterious cause of death that is reached by eliminating any other known cause.

Some research indicates that infants sleeping on their stomachs are more prone to SIDS.

Neevee said she was told by Suramala that Baby Makibi shouldn’t have been sleeping on his stomach.

“She made me feel like I was responsible,” Akesuk said.

Two years later, Akesuk learned from a former Cape Dorset nurse, Gwen Slade, that the cause of her newborn baby’s death had been changed to cytomegalovirus—a treatable lung infection.

But when Akesuk tried to get her baby’s autopsy report, local coroner John Corkett refused.

When this point was raised in the inquest Nov. 22, the coroner’s lawyer, Amy Groothuis, objected to the line of questioning by the family’s lawyer Kathryn Kellough.

“This goes beyond the scope of the inquest. And Chief Coroner Padma Suramala already addressed the miscommunication in her apology,” Groothuis said.

But presiding coroner Garth Eggenberger agreed with Kellough that it was important for the jury to hear what steps were taken by Suramala after Baby Makibi’s death.

“Corkett said we wouldn’t understand the report, so we didn’t need it,” Akesuk testified.

It was only after the family got the RCMP involved that Corkett finally handed over the results, the jury heard.

“The coroner made us feel like we weren’t good parents,” Qaumagiaq said, his voice cracking with emotion.

After Qaumagiaq took a drink of water and composed himself, Kellough continued to lead him through his testimony.

“Did anybody go through that report with you?” Kellough asked.

“No, me and Neevee just looked through it.”

“So it left you quite confused, the change from SIDS to [cytomegolavirus]?”

“He said we wouldn’t understand them anyway because of the big words,” Elisapee testified.

The grandmother said she quit her 10-year career to become a stay-at-home caregiver for Baby Makibi, her first grandchild.

When asked about Suramala’s conference call, which Elisapee was also present for, the grandmother broke down.

“I know, I know it wouldn’t have changed his sickness. I wanted to punish myself but I couldn’t. It felt wrong to blame [us,]” she said through tears.

Nurse Laura Easton also testified during the afternoon of Nov. 22.

She provided Akesuk with prenatal care and Baby Makibi with regular checkups during his three-month life.

Easton said fellow nurse Debbie McKeown, who was on call the night Baby Makibi died, reported the following morning during the nurses’ daily meeting that the death was “clearly a SIDS case.”

But a member of the jury asked Easton if McKeown’s diagnosis was “an assumption” from Suramala’s preliminary autopsy report.

“Yes, because that would’ve been done earlier,” Easton said.

Pathologists and Suramala later reversed the cause of death from the lung infection back to SIDS.

Pathologists involved in Makibi’s autopsy are expected to testify later in the inquest.