Nunavut beneficiary fears impact of uranium in her backyard

“We need to make sure we’re ready. The minerals and resources aren’t going anywhere” 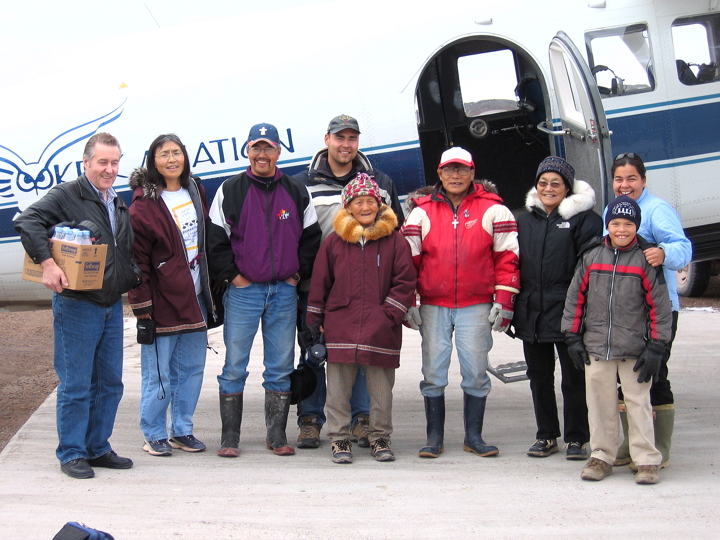 In September 2005, Paula Kigjugalik Hughson flew over Akulliqpaq Qamaniq and Qamaniq Tugliqpaaq with several members of her family, most notably her aging mother, Betty, and her mother’s brother, John Killulark.

That hour-long flight over those water bodies near Baker Lake, known in English as Aberdeen and Schultz lakes — and the stories that Killulark shared with her — changed how Hughson looked at the past. And also the future.

“He was using older words that aren’t used as much anymore. I realized there’s a vast richness of language we’re losing. I was in awe of how much knowledge our elders have. They’re like PhD professors and I’m in kindergarten,” she said.

“It’s up to us to keep it going, record the histories, record the knowledge and keep it alive somehow. We have to find a way to incorporate it into our education system. We need to know what’s in our backyard.”

Late in 2014, the Nunavut Impact Review Board granted intervener status to seven groups and one individual to make formal presentations at the final hearings into Areva Resources’ Kiggavik uranium mine’s final environmental impact statement scheduled for March in Baker Lake.

That single individual intervener was Hughson.

The Baker Lake resident and land claim beneficiary will base her presentation on a thesis she completed to obtain a masters degree in natural resource management from the University of Manitoba.

That thesis — “Our homeland for the past, present and future” — was compiled from interviews she conducted in Inuktitut with her uncle, the elder John Killulark.

During interviews, and that 2005 flight — she wanted to go camping with Killulark at those lakes but he was too frail — Hughson learned of all the people who once lived, fished, hunted caribou, travelled and raised their families near where Areva Resources is proposing to build a uranium mine.

“As we were flying, he would sing songs, he made the whole landscape come alive. You could just imagine the families living there. You could imagine them waving at us, looking up at the plane. It was just amazing,” Hughson said.

There are no buildings or monuments to that rich history, she said, only stone tent rings and some artifacts. But hunters still use that area today because of the caribou herds who migrate through.

And so when she stands before NIRB board members and staff, Areva employees, government officials, members of various interest groups and her Kivalliq peers, she hopes to convince everyone to slow down, educate the workforce and consider this project only when Inuit can be sure the benefits will outweigh the costs.

That may take years, she said. So be it.

“We need to make sure we’re ready. The minerals and resources aren’t going anywhere. Let’s wait until we’re educated and we are on par,” she said.

Hughson is concerned about a number of things related to the uranium project.

She says the company should have consulted elders more and included more Inuit Qaujimajatuqangit, Inuit traditional knowledge, in their project design.

Killulark identified 290 traditional place names that Hughson recorded, and he told her there were even more than that.

“This information showed how Inuit are very much a part of the land and dependent on it, especially caribou and fish for Inuit who live in Baker Lake,” she wrote in her recent NIRB submission.

She also questions the level of support for the project among regular beneficiaries.

And perhaps the government should hold a territory-wide vote on the subject so regulatory bodies could gauge the will of the people, she added.

“I just want the system to be open and transparent and accountable. Do your job right, and if you’re doing it right, you have nothing to hide,” she said.

Besides, Inuit shouldn’t be satisfied just to drive trucks and cook food for the mining companies, she said.

Political leaders should be investing in long-term education for Inuit so they can become geologists, engineers and lawyers and have more meaningful input on projects such as this.

Then, of course there is the mine itself, the mistrust of multi-national companies, and the prospect of a poisoned tundra landscape once the mine shuts down, she said.

She wants more details on when the mine hopes to open, how long it will extract uranium and full assurance that no radioactive waste will be left behind on the shifting permafrost.

“Areva will have to ensure it has the money to deal with upcoming accidents that will happen with the changing climate of the earth,” she wrote in her submission.

And approval can’t be followed by years of stalling, she said, because climate and economic conditions are changing; what ultimately gets approved may be unreasonable or inappropriate just a few years from now.

Other intervenors have voiced concerns over Areva’s lack of project timeline along with the potential impact the project will have on caribou, since it will be located in post-calving grounds.

The Beverly and Qamanirjuaq Caribou Management Board estimates the “minimum gross economic value” of those two herds is about $17 million annually, in a 2004 fact sheet.

The management board defines post-calving areas as those, “used by cow/calf groups or by satellite-monitored female caribou during the post-calving period, which is the period from late June to the end of July.”

Hughson, and others, have also pointed out that the Kivalliq interior is rich in uranium and this mine could be the first of many future uranium projects.

It’s important to set a strong precedent, she said, to control the process, the outcome and the benefits for local people.

In November, government leaders in Nunavik voiced their opposition to uranium development saying they didn’t have enough facts and information to support it.

Hughson’s mother and uncle died within seven months of each other, in 2013. She’s grateful she was able to capture some of their knowledge, language and songs before they passed away.

Now she has her son Robert to think about. He’s two years old. She hopes one day he’ll be able to hunt caribou like his ancestors did.

“It’s my backyard. It’s for him and future generations,” she said. “It’s our future. I want to make sure we do it right.”

The NIRB will hold final hearing on the Kiggavik project in Baker Lake from March 2 to March 14.

Technical hearings will take place first and then community roundtables will follow.

To build public awareness and community engagement, the NIRB has scheduled community hall information sessions in each Kivalliq community prior to the March final hearing. Meetings have already been held in Chesterfield Inlet and Naujaat. 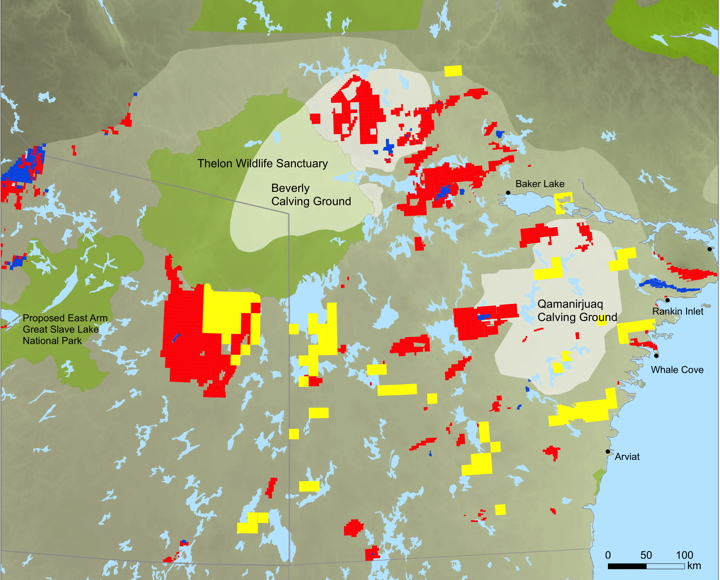 A 2011 map showing the range of the Beverly and Qamanirjuaq caribou herds and their calving grounds as well as mineral leases (blue), mineral claims (red), prospecting permits (yellow), and protected areas (light green) in the area. The blue spot surrounded by red, just west of Baker Lake, is where Areva hopes to build its uranium mine. Other maps on the BQCMB website show numerous uranium company mineral claims on traditional caribou calving grounds. (PHOTO COURTESY OF BQCMB)