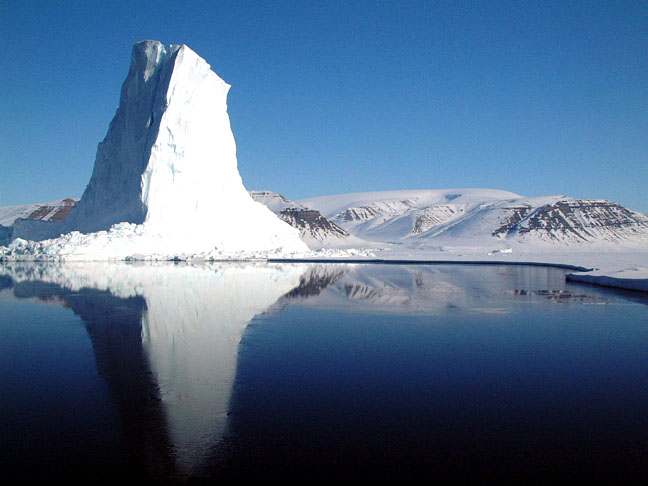 An iceberg in Baffin Bay. Clyde river residents and hunters are heading to the Supreme Court of Canada Nov. 30 to prevent a consortium of companies from seismic blasting for seabed oil and gas reserves here and in Davis Strait. (WIKIMEDIA COMMONS PHOTO) 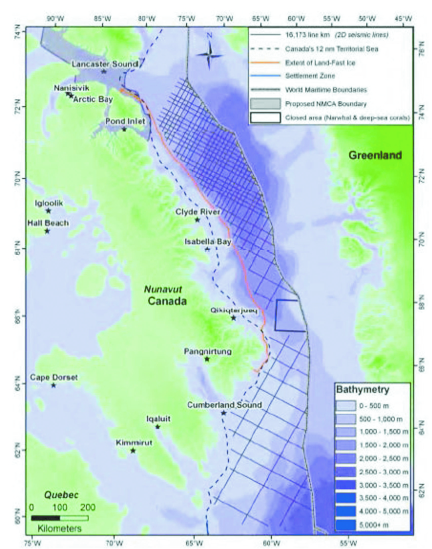 In a strange legal twist coming soon to the Supreme Court of Canada, the land claim board that manages wildlife in Nunavut is worried that if Clyde River wins its appeal against seismic testing, the board’s very powers might be at stake.

Residents and hunters in Clyde River are going to the Supreme Court Nov. 30 to argue that the Crown had no right to hand over its duty to consult Aboriginal people on issues that impact their livelihood to a regulatory tribunal—in this case, the National Energy Board.

Clyde River’s lawyers are also arguing, among other things, that the NEB has no legal authority to assess the quality of that consultation when the energy board allows third parties to do the consulting.

In 2011 and 2012, as part of its environmental assessment process for the NEB, the companies hoping to conduct five years of seismic testing for seabed gas and oil in Baffin Bay and Davis Strait, held public meetings in north Baffin communities—meetings local people say were inadequate.

In 2014, despite local complaints and demands by the Qikiqtani Inuit Association to delay approval pending a strategic environmental assessment of Baffin area oil and gas exploration, the NEB gave a consortium of companies approval for their seismic blasting plan.

Clyde River residents are hoping to prove the whole process was flawed, that it disregarded Aboriginal rights and that seismic testing—which sends explosive sound waves into the seafloor in search of oil and gas—is a threat to marine wildlife and therefore a threat to Inuit harvesting and culture.

But here’s the twist: The Nunavut Wildlife Management Board is a tribunal, like the NEB, with powers to consult Inuit on wildlife issues and also to assess the quality of consultation when it’s done by a third party.

In other words, it appears this case, which pits Inuit rights against the Crown’s current consultation process, has put the NWMB in an awkward position of having its own powers threatened.

Which is why the NWMB is arguing, in its intervenor submission filed with the Supreme Court, that if the court rules in favour of the Clyde River appellants, that the court ensure its decision does not impact land claim boards such as the NWMB.

“The determination of this Honourable Court on issues regarding consultation could very well have a significant impact on the way in which the NWMB conducts itself,” the NWMB argues in its factum—a fancy word for a written submission of facts and arguments.

It goes on to argue that if the court rules against the NEB, “then the NWMB requests the Court to do so in a matter that does not preclude the NWMB (or other similar tribunals or agencies) from fulfilling consultation and accommodation functions.”

The wildlife board should be immune to such a ruling, it argues, because it is an Inuit-Crown institution of public government, operating under the Nunavut Land Claim Agreement, “with its primary purpose being to protect Inuit rights and interests while respecting the principles of conservation.”

That is to say the NWMB’s role is specific, confined to issues as defined under the land claim and therefore, “has a strong claim for jurisdiction over consultation and accommodation matters,” the NWMB says.

The case—a kind of Davidee vs. Goliath fight between Inuit hunters and multi-national oil and gas contractors—has garnered international attention from Hollywood movie stars, advocacy groups, land claim organizations and Greenpeace Canada, which is helping to pay the legal bills.

Ten bodies and organizations have been granted intervenor status in the case which the Supreme Court agreed to hear jointly with another case—the Chippewas of the Thames River First Nation v. Enbridge Pipelines Inc.—which involves similar issues related to the NEB and the Crown’s duty to consult.

Those intervenors include three Inuit birthright organizations—Nunavut Tunngavik Inc., Makivik Corp. and the Inuvialuit Regional Corp.—all of whom have submitted their factums to the Supreme Court.

NTI, in its submission, asks the fundamental question: what must the Crown and the NEB do to fulfill their constitutional obligations toward Aboriginal peoples? In assessing what happened in North Baffin, NTI says the Crown failed to “engage meaningfully” with Nunavut Inuit.

The IRC tries to answer the same question in their submission.

They argue that deep consultation is necessary in cases involving Aboriginal rights protected under modern treaties and that the bar to be met is “free, prior and informed consent,” as outlined in the United Nations Declaration on the Rights of Indigenous Peoples.

Only when that is achieved can Aboriginal groups and developers build “confidence and mutual respect,” and provide certainty for Aboriginal peoples that compromises they have made, and rights they have negotiated, through land claim settlements will be respected, the IRC says.

“The oil and gas regime in Arctic waters takes development for granted and adds Inuit consultation as an afterthought: the honour of the Crown requires more,” Makivik says.

The Hamlet of Clyde River, its former mayor Jerry Natanine and the Nammautuq Hunters and Trappers Organization will face TGS-NOPEC Geophysical Company ASA, Petroleum Geo-Services Inc., and Multi-Klient Invest at the Supreme Court in Ottawa on Nov. 30.

No decision has been made yet on whether proceedings will be simulcast in a northern location.