“It’s just not that simple” 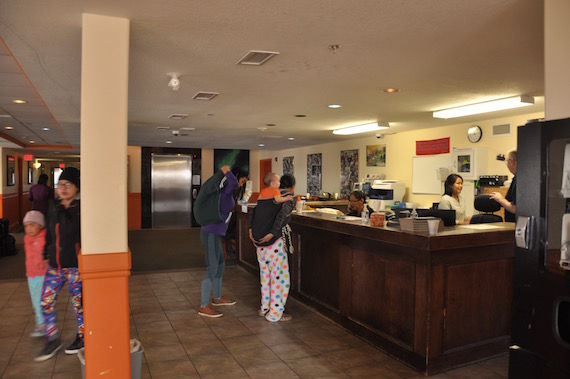 Staff at the Tammaativvik boarding home front desk help to register new patients checking in. The 90-bed facility is often over capacity. (PHOTO BY SARAH ROGERS) 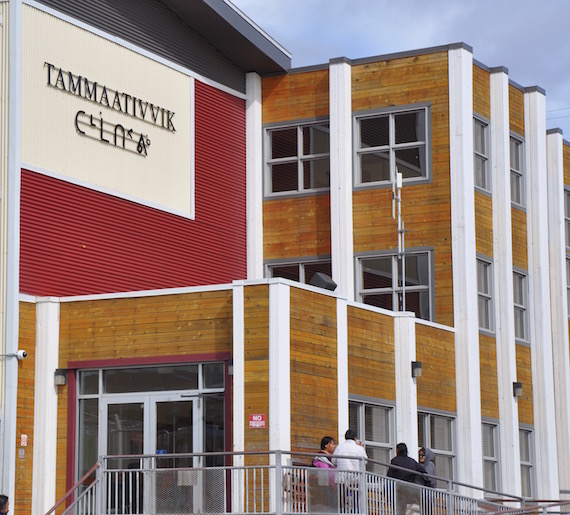 Tammaativvik boarding home has a security guard now stationed at its front door 24 hours a day to help keep patients secure and the centre free of disturbances and violence. (PHOTO BY SARAH ROGERS)

From the front desk lineup to a lobby filled with conversation over coffee and the smokers who line its front steps, the Tammaativvik boarding home is almost always a bustling place.

But Iqaluit’s patient boarding home has recently stepped up security efforts to help keep guests safe and at ease in the busy 90-bed facility.

When it was built and opened in 2010, the Tammaativvik more than doubled the capacity of the city’s former boarding home. Tammaativvik houses patients from across Baffin Island who are in town to attend medical appointments.

But the centre is still frequently over capacity. Staff have seen an increase in alcohol use among patients with the opening of Iqaluit’s beer and wine store, and this past spring a guest was killed in the boarding home.

While the centre used to have a single night-security guard, Tammaativvik now has two security guards staffing the building 24 hours a day, including a guard at the front door at all times.

Jim Taylor is the executive director of Pairijait Tigumivik Elders Society, which is contracted by the building’s owner, Nova Group, to manage operations at the facility.

Taylor said the new security features aren’t a direct response to the violent death of a patient staying at the centre this past spring, noting that the centre had already planned to make these changes.

Staff had just installed security cameras throughout the facility last April, two weeks before 22-year-old Amy Kautuq was killed in her room at Tammaativvik.

Relatives say the young mother from Clyde River was accompanying her young son to medical appointments in Iqaluit when her common-law partner murdered her in the room.

Police later found Jordan Apak dead in another part of town, and the case was considered to be a murder-suicide.

It wasn’t clear whether the 31-year-old man was also staying at the boarding home, although Taylor confirmed that security footage showed him leaving the woman’s room.

The centre’s problems are rarely so violent and most often are prompted by alcohol use, among guests and visitors who come to see them.

That’s been aggravated by easy access to beer and wine since the Iqaluit store opened last fall, Taylor said.

“Because of all the problems that exist with alcohol being so readily available, we now have someone at the door at all times,” he said. “And two security staff in the building at all times.”

Alcohol is not permitted in the boarding home, though patients can purchase it and have it put in a storage locker until they return home.

Staff are still often required to check patients’ bags—even their amautis at times—to ensure they’re not bringing alcohol into their rooms.

While the front doors used to remain open, guests now carry a key card that lets them into the facility. And visitors are required to sign in at the front desk.

“The atmosphere is more relaxed. We still have the odd problem with intoxicated people showing up at the front door. But the security has helped a lot.”

Just as Taylor finished his sentence, the sound of yelling grew louder from outside the office. An angry man—a part-time employee demanding more work hours—is shouting and storming towards Taylor, screaming profanities at the man.

In a few moments, Taylor—a former RCMP officer—and a security guard have walked the man outside and called police.

He shrugged off the incident.

Running a boarding facility for Baffin Island patients is much more complex than just offering room and board to guests.

“It’s just not that simple,” he said.

Facility is over capacity “most of the time”

“They thought when they built this [centre] that it was adequate, but it’s not,” Taylor said, noting the home is over capacity “most of the time.”

While Tammaativvik arranges rooms for surplus patients at local hotels in Iqaluit, even that has become a challenge with the recent closure of Hotel Arctic.

“It’s greatly reduced the number of hotel rooms for us, and we often can’t find room,” he said, noting the boarding home often must pay local residents to host patients.

“But people come in and they’re angry, because there’s no room for them.”

When some guests leave to catch a flight home, and then that flight is cancelled for the day, Taylor said it’s common for them to return to Tammaativvik to find that another guest has already taken their room.

It’s a challenge to manage the centre’s schedule with a constant flow of new arrivals arriving on flights from across the region all hours of the day.

Larga facilities that provide temporary accommodation to Nunavut’s patients in larger cities like Ottawa and Winnipeg have regularly scheduled flights of patients coming in every day, Taylor noted.

For that reason, the boarding home soon plans to bring in a consultant to help manage its scheduling.

The boarding has also faced criticism for the state of its rooms.

A patient escort staying at Tammaativvik recently posted photos on social media showing what appears to be a blood-stained pillow and sticky walls in a room in the boarding home.

The former patient called the home “filthy” and unsuitable for the patient she escorted, who was a woman with her newborn baby. She told Nunatsiaq News that a housekeeper only came to clean the room the next day, after she had posted a complaint about it on Facebook.

But Taylor said there was no way to know exactly what the photos depicted, denying that the centre’s rooms are left dirty.

He said cleaning staff check the rooms daily to take out garbage and dirty towels, and clean the rooms thoroughly when patients check out.

“There are people who come in looking for something to complain about,” he said.

“Others are just really appreciative of what they get. It’s hard to please everyone.”

—with files from Courtney Edgar