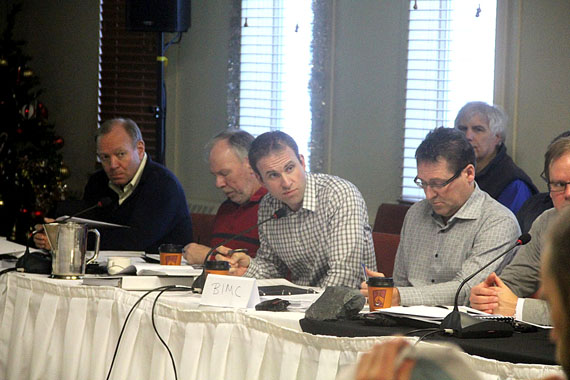 The Nunavut Impact Review Board’s project certificate workshop for the Baffinland Iron Mines Corp. Mary River iron-ore project held in Iqaluit Dec. 18 and 19, proved to be useful, Ryan Barry the executive director of the NIRB said on the last day of the workshop.

Many of the terms and conditions as written will not require additional commentary or clarification.

“That’s not to say there won’t be a need for additional dialogue on the implementation of those terms and conditions moving forward,” Barry said.

The workshop was the first step in developing the NIRB’s monitoring program for Mary River.

The program itself and its implementation will require regular dialogue through the coming months and years as the Mary River project advances, Barry said.

That means the board and NIRB staff will follow many of the other licensing and permitting processes as they unfold with many of the regulators who attended.

“We’ll be looking to have dedicated staff that are working on implementation under our own responsibilities under the project certificate,” he said.

Barry said that NIRB welcomes more dialogue with Baffinland and the other parties “as we look at means of coordinating responsibilities and minimizing duplication.”

The NIRB will try to find the most effective ways to carry out those responsibilities and to make sure that “above all that the potential impacts to the environment are managed responsibly.”

Overall, the workshop meetings went at a quick pace.

“It’s been very productive meetings, we’ve moved through things very quickly I think once we found our pace,” Barry said.

Pauloosie Suvega, the associate deputy minister for the Department of Economic Development and Transportation agreed that it’s a significant step forward for the Mary River project.

He also said it’s good that polar bears have been included in the term “marine mammals.”

“On a very positive note, the Government of Nunavut is pleased that the terms and conditions and the draft project certificate concerning marine mammals will apply equally to polar bears,” Suvega said.

He said as long as the NIRB plans to list commitments in a “living” document available to agencies and the public in a transparent matter, “all involved will know that they are being adhered to.”

Suvega said the GN is committed to supporting Baffinland, the NIRB and other parties to “maximize the long-term benefits and opportunities that this project offers and to minimize and mitigate negative environmental and social impacts.”

Now, Baffinland will deal with the regulatory phase of the project, Erik Madsen, Baffinland’s vice-president sustainable development said in his closing remarks.

“There are still more steps along the way for Baffinland now to continue on, your guys’ work is not done, but this step is done so it’s a major accomplishment,” he said.

Madsen said he wanted to stress the importance of timelines for the Mary River project.

Holding the workshop before Christmas was “very, very important to our project,” he said.

“I know it put some pressure on a lot of people, but we really much appreciate that before the holidays.”