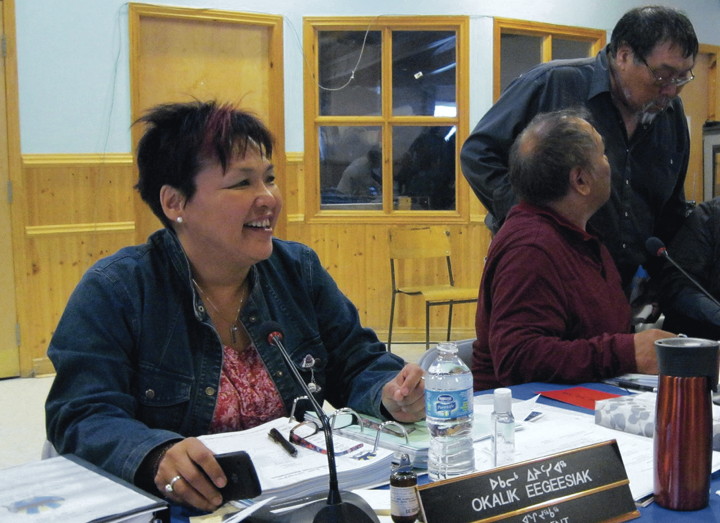 Okalik Eegeesiak, president of the Qikiqtani Inuit Association, says she was disappointed but not surprised when the National Energy Board approved a seismic testing project off the east coast of Baffin Island. In a few weeks, Eegeesiak will take on the new roll as head of the pan-Arctic Inuit Circumpolar Council. (FILE PHOTO)

The Qikiqtani Inuit Association’s outgoing president says she is disappointed that the National Energy Board approved seismic testing in Baffin Bay in spite widespread opposition from Inuit, but she said the association will now try to maximize Inuit involvement and benefits.

Reached in Ottawa June 27 where she is on holiday with her family, Okalik Eegeesiak said she had hoped the NEB would delay approval until after the federal government completed a strategic environmental assessment of oil and gas exploration in this area, but it was a faint hope.

“We had a feeling it would go down this way, but still a bit surprised that Inuit concerns weren’t heard and considered,” Eegeesiak said.

In that sense, it was a disappointing decision.

At this point, she said the QIA will work with other bodies such as the Nunavut Marine Council and Nunavut Wildlife Management Board to examine the terms and conditions set out in the NEB decision to see if there’s any way to maximize Inuit involvement and benefit.

For instance, some Inuit have suggested there might be better and worse times of the year to conduct seismic testing to minimize its impact on marine mammals, Eegeesiak said.

The project, lead by a consortium of companies known as Multi-Klient Invest, or MKI, will tow an air gun behind a ship up and down the waters of Baffin Bay and Davis Strait, off Baffin Island’s east coast, and blast the gun so that sound waves penetrate the water and the seabed below.

They experts analyze the data to determine the geology below the seabed. Such data is often sold to third parties to gauge the potential for oil and gas development.

A benefits plan submitted to Aboriginal Affairs and Northern Development by MKI is confidential, and an aboriginal affairs spokesperson said the department cannot release it into the public domain.

Baffin leaders have roundly opposed the project, saying it ought to be delayed until after a strategic environmental assessment currently being conducted by AAND is completed.

Eegeesiak said that’s the biggest concern, because of risks associated with oil and gas development in the Arctic, especially regarding a potential oil spill.

“We have been working with Indian Affairs to do the strategic environmental assessment with the communities to discuss social and economic impacts of oil and gas — and we argue that it should include seismic testing,” Eegeesiak said.

“Once those processes are done, in three or four years, Inuit might be in a better position to support such things. But that will be through discussion and negotiation. We have to be assured that companies will be able to address things like oil spills in the Arctic — which they’re not right now.”

When asked whether the QIA would consider legal action, she said it’s too early to tell.

The seismic testing would occur in waters outside the 12-nautical-mile offshore boundary of the Nunavut land claim agreement, which means they might not have a strong legal position.

Even though it lies outside the Nunavut Settlement Area, the AAND minister, Bernard Valcourt, could have ordered an environmental assessment be conducted by the Nunavut Impact Review Board, ensuring that Inuit were properly consulted and their views fully registered.

In a joint letter to Valcourt from the QIA and Nunavut Tunngavik, the two land claim bodies make that request outright.

“These and QIA’s other recommendations have gone unanswered. Consequently, the affected communities continue to actively oppose the MKI proposal,” the April 8 letter says.

“They will continue to do so until their questions are answered, their concerns addressed and they are assured that adequate measures are in place to protect wildlife and the environment from the impacts of seismic surveys and other offshore oil and gas exploration activities.”

Part of the problem is the current volume of interest in Nunavut by resource hungry companies, Eegeesiak said.

As that volume increases, land claim bodies and institutes of public government such as the NIRB, will be under increased pressure to process complex applications from mining companies.

“We’re dealing with mining companies right now and a lot of times, that stretches your resources. To top that off with oil and gas development or seismic testing, on top of all the other files, things just have to take more time.”