“I feel like if I go do this trip, I could be a part of helping history not repeat itself again” 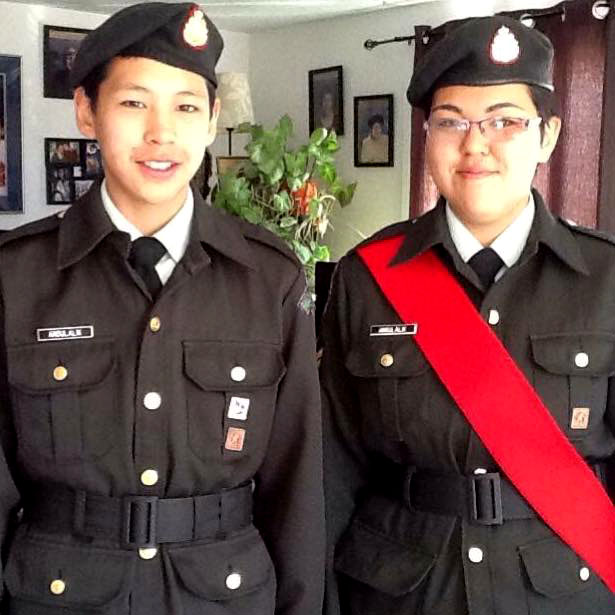 Cadet Teghan Angulalik of Cambridge Bay (on the right, beside her brother, Cyril Angulalik) will visit Belgium Nov. 9 and 10 for the 100th anniversary of the Battle of Passchendaele at the Passchendaele Canadian Memorial in Belgium. (PHOTO COURTESY OF TEGHAN ANGULALIK)

The 16-year-old warrant officer from 3004 Nanook Royal Canadian Army Cadet Corps of Cambridge Bay will head to Belgium this week, after being selected as one of five youth in the country to join a Canadian delegation at the 100th anniversary of the Battle of Passchendaele, Nov. 9, at the Passchendaele Canadian Memorial.

“Only a few students ever get to do this, to get this experience, I feel really lucky to have the opportunity to do this trip and I think it will help me understand what has happened in the past.”

To be selected, she wrote an essay explaining why she wanted to be involved with the trip.

“I told them about my history in cadets and how cadets give us an idea of what has gone on in the past, the history of the soldiers,” she said. “I feel like if I go do this trip, I could be a part of helping history not repeat itself again.”

About 100,000 members of the Canadian Corps took part in the First World War Battle of Passchendaele in 1917.

More than 4,000 Canadian soldiers were killed and almost 12,000 were wounded. Thick mud on the battlefield made fighting conditions at Passchendaele nearly impossible.

Nine Canadians earned the Victoria Cross—the highest award for military valour that a Canadian could earn—for their bravery at Passchendaele.

Canadian soldiers began their attack on Oct. 26, 1917, after relieving soldiers from Australia and New Zealand who had been fighting there since the summer months.

This year, on Nov. 9, the Canadian Armed Forces will lead a sunset ceremony and vigil at the Passchendaele Canadian Memorial. A ceremony of remembrance and a torchlight procession will take place on Nov. 10, starting at the memorial and ending at a church in Passchendaele.

The Kiilinik High School student was encouraged to apply for the opportunity by Patti Bligh, her social studies teacher, who also arranged a European trip for students to attend the 100th anniversary of the Battle of Vimy Ridge in April.

Student participation in the delegation is supported by the national youth organization Encounters With Canada. The other youth attending are from Quebec, New Brunswick, Manitoba and Newfoundland and Labrador.

“Veterans Affairs Canada worked with Encounters with Canada to select five youth to join the Government of Canada delegation, travel costs of which are paid for by the department. Commemorative events such as the 100th anniversary of the Battle of Passchendaele provide exceptional opportunities for Canadian youth to expand their knowledge,” Marc Lescoutre, a spokesperson for Veterans Affairs Canada told Nunatsiaq News.

The delegation of veterans, youth and representatives of regimental and Indigenous organizations will be led by Sherry Romanado, the parliamentary secretary to the minister of veterans affairs and associate minister of national defence, he said.

Angulalik will bring memorabilia from Cambridge Bay to put into a time capsule marking the centennial event.

She said she looks forward to sharing her experience with people in her community when she returns home.