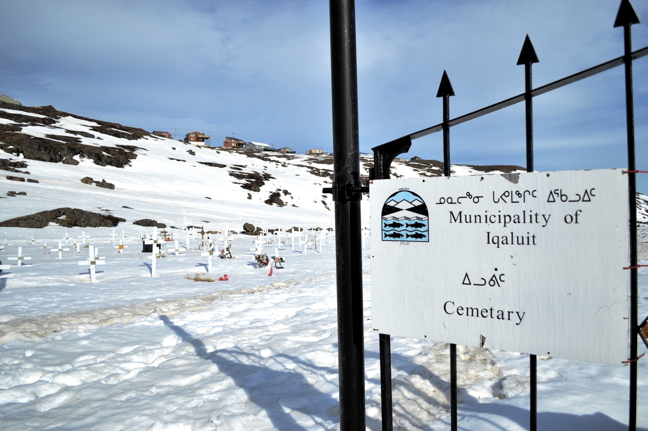 While most film crews approach Iqaluit city council for approval when they come to town to shoot, there is currently no legal requirement for them to do so. With more and more film crews choosing Iqaluit for filming, councillors discussed April 26 the potential for developing a municipal film permitting system to regulate how filming is conducted on city property. (PHOTO BY STEVE DUCHARME)

Iqaluit city councillors gave the green light to the crew of the Kugluktuk Grizzlies movie to shoot near Iqaluit’s old cemetery, in a motion passed at a regular council meeting April 28.

Council’s motion is conditional on whether producers allow a city official to monitor the filming and that they allow no crew members to enter the graveyard during production.

The decision reflects concerns noted by some councillors that members of other film crews, who have approached council in the past, haven’t always been respectful of the site.

“In the past, I know, crews have trampled the gravesites. It’s so disrespectful to trample on a grave, it’s taboo,” said Coun. Megan Pizzo-Lyall.

Alethea Arnaquq-Baril, representing Grizzlies’ producers at the council, said the conditions set down by the city won’t pose a problem for filmmakers.

“[It] would be a fake grave that we set up, closer to the water, not near the actual graves. The cameras would be on the other side of the graveyard so that we’re looking through the graves to where the fake grave would be,” Arnaquq-Baril told councillors.

But this latest instalment in graveyard location scouting has raised some general questions about filming in Iqaluit, as Nunavut’s capital’s appeal increases as an ideal location for northern film shoots.

Councillors discussed the fact that the city doesn’t have a film permit system in place — forcing movie crews to continually approach council for approval, as a courtesy, to shoot on public land.

“We’re actually getting an industry,” said Coun. Terry Dobbin, who cited the recent 2016 film “Two Lovers and a Bear,” shot in Iqaluit, with a production budget of $8.5 million.

Deputy mayor Romeyn Stevenson, filling in for vacationing mayor Madeleine Redfern, said the city should encourage the development of a film industry within the municipality.

“I feel that the film industry in the town is a great opportunity for business development, but I do feel we’re not yet prepared in some ways,” Stevenson said.

“We don’t even have a permitting process whatsoever for films or for people using our space in general, for anything.”

Stevenson also noted that while film crews often seek the blessing of council to film at sites, there is nothing in place to prevent them from doing so.

“They could walk all over our cemetery and film and we don’t really have a place to say ‘no’, because we haven’t created guidelines for the use of our public spaces, the cemetery being one of them,” he said, adding that the time for council to do something about it is now.

Coun. Dobbin asked if the city could borrow policies on the issue from the Nunavut Film Development Corp.

“We’ve had three films in the last year, bringing millions of dollars to Iqaluit. Do we have an industry in this city? Ninety-eight per cent of all the dollars that come into Iqaluit is through federal government transfer payments,” he said.

“We do need a permitting process, it would help the film industry plan their shoots in Iqaluit, as opposed to always coming to council for some direction,” he said.

Councillors did not make a motion towards adopting a permit system, but they promised to explore the issue further at future meetings.

The next Iqaluit City Council meeting is scheduled for May 10.