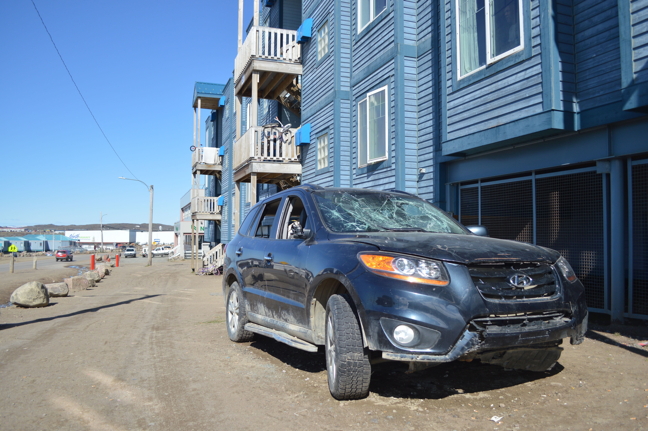 Kevin Sloboda told Iqaluit councillors June 27 that about half of the derelict and abandoned cars on Iqaluit Housing Authority lots have been towed to the scrap metal dump. (PHOTO BY STEVE DUCHARME)

Iqaluit councillors unanimously passed the final draft of their first strategic plan in nearly half a decade, during a city council meeting June 27, concluding more than a year of debate and planning for the over-arching strategy that will help direct long-term goals for the city.

But with an absent mayor Madeleine Redfern—as well as councillors Terry Dobbin and Simon Nattaq—the landmark plan was marked only by a round-the-table call for votes by the city’s deputy mayor, Romeyn Stevenson, with no discussion.

Nunatsiaq News was told at the meeting the strategy plan was be released publically by the city on June 28.

But passing the plan wasn’t the only topic councillors chewed during a lengthy meeting. Following are some highlights.

Councillors were mostly silent regarding the recent “resignation” of Iqaluit Aquatic Centre volunteers over alleged concerns about the facility’s operations, safety and maintenance.

The city’s recreation director, Amy Elgersma, “accepted the resignations” of a dozen volunteer fitness class instructors, June 19, after they collectively sent a series of letters demanding repairs to the fitness class room, enhanced emergency medical supplies and for the city to reconsider charging patrons beyond their entry fees for certain classes.

Coun. Jason Rochon was the only member of council to acknowledge the volunteers, adding some remarks onto a member statement that included congratulations to Iqaluit students completing another school year.

“What transpired recently was unfortunate but a great reminder that the city needs to be smart enough to learn from lessons and we need to acknowledge when we do wrong and take those lessons and change the way we conduct ourselves,” he said. He also thanked the 12 volunteers for their service to the city.

Coun. Joanasie Akumalik, who also chairs the city’s recreation committee, declined to speak on the issue when approached by Nunatsiaq News after the council meeting.

The city’s chief municipal enforcement officer, Kevin Sloboda, updated council that more than half of the 40 identified derelict cars on Iqaluit Housing Authority properties have been removed.

The rest, about 18 vehicles, should be in the dump “over the next couple of weeks,” Sloboda said.

All that’s left for the city to do before that happens is a final haggle over the price for removal and decommissioning, since the city needs to contract out for towing and the draining from vehicles of toxic substances.

Its costs the city about a $1,000 per car for disposal, but it only charges a $500 “tipping fee” for car owners to turn their old cars in.

Iqaluit mayor Redfern estimated during a council meeting last summer that there were as many as 400 cars within the city’s boundaries that are abandoned.

Since then, at least 200 vehicles have been collected and shipped south, as part of a deal signed between the city and Kudlik Construction Ltd. last year to remove the city’s temporary scrap metal landfill.

Councillors raced each other to get their arms in the air first to approve repairs on the city’s appalling road to Apex, which is an obstacle course of potholes, washboard ruts, and very little actual asphalt.

Deputy Mayor Stevenson told council that while the proposed repairs were not a “permanent solution,” they will at least be enough to allow workers to repair the numerous potholes and other damages dotting the road.

Those repairs are currently impossible because there’s so little pavement remaining on the road that city workers can’t apply asphalt into potholes. Instead use sand—which gets washed out after a few days.

Road repairs will include a new bed for the pavement to be bonded over and allow for longer-lasting patches on the road in the future, Stevenson explained.

The cost for the fix has yet to be determined but Stevenson said it will come in below the current funds remaining in the city’s public works account for this year—so less than $250,000.