“Like our communities, our exploration and mining industry faces costly challenges” 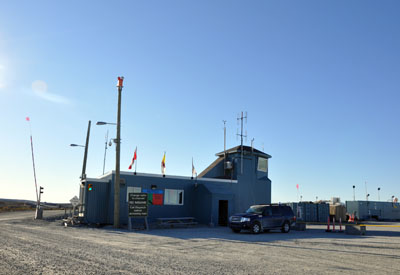 The air terminal at Meadowbank gold mine in the Kivalliq is operated by its owner, Agnico Eagle Mines. Mining companies already supply their own infrastructure, says the NWT & Nunavut Chamber of Mines, and should be exempt from a carbon tax. (PHOTO BY SARAH ROGERS)

A carbon tax in Canada’s North would deal a major blow to mining in the territories, said the Northwest Territories and Nunavut Chamber of Mines this week.

The organization welcomed the statement put out by northern premiers July 21 at last week’s Council of the Federation meetings in Whitehorse: The territorial leaders want help adapting to a changing climate, but raising the price of greenhouse gas emissions through carbon pricing will only hurt the northern economy.

Nunavut Premier Peter Taptuna and his territorial counterparts said that climate change goals should be addressed in a way that doesn’t negatively impact the cost of living in the North.

Mining and exploration have helped build “a northern middle class,” the NWT and Nunavut Chamber of Mines said in a July 27 release, with mining making up a major share of the northern economy.

“Like our communities, our exploration and mining industry faces costly challenges, including a heavy reliance on diesel energy for heat and power,” Vivian said, “and this adds significantly to higher costs.

“Thus our concern with any new initiatives that propose to increase operating costs and that reduce our ability to compete globally for capital investment funding.”

Due to the lack of infrastructure in many northern regions, mining companies must often provide their own airstrips, roads, accommodations and electrical power, Vivian noted — and that’s already pushed companies to take innovate and environmentally-friendly approaches to running their operations.

“What we really need from the federal government is assistance to level the playing field with infrastructure like all-season roads and less expensive, greener grid power,” Vivian said.

Canada’s national strategy on climate change isn’t due until the fall but federal Environment Minister Catherine McKenna said last week that a price on carbon emissions would be put in place by the end of 2016.

Ottawa hasn’t yet said if it plans to impose that pricing on every province and territory.

Unlike the NWT-Nunavut mining organization, the Mining Association of Canada, a national group, said this past April that it supports the imposition of a carbon price to help reduce Canada’s greenhouse gas emissions.