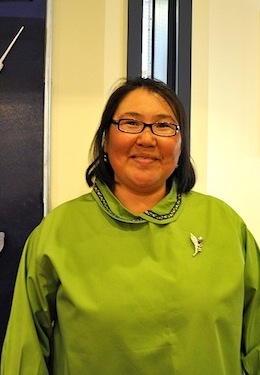 Jeannie Ugyuk knows a thing or two about the ailing daycare system in Nunavut: the MLA for Nattilik previously worked as a teacher, hamlet councillor and social worker in Taloyoak.

“We have a brand new [daycare] building that operated for about a year or two, and it’s been closed for the last three years because there’s a lack of funding or no proper management on the local level,” Ugyuk told Nunatsiaq News Oct. 29 in the Nunavut legislature.

Ugyuk called for block funding for daycares in Nunavut, saying the benefits of early childhood education puts children at an advantage going into kindergarten.

“I’d like them to review the subsidy for families and parents,” Ugyuk said. “We don’t have enough economics going on in Nunavut to have a self-sustaining daycare just from user fees.”

“You [can] have so many bake sales, but you can’t make enough cupcakes to heat and pay electricity bills every month,” Ugyuk said.

Ugyuk asked what criteria daycares need to meet in order to operate, how many daycare spaces there are in Nunavut, and she spoke about the many challenges daycares face regularly.

A review of the Nunavut Daycare Act is currently in the works, she said. That will outline how many daycares there are in the territory, and the challenges the system faces.

No date has been set for the release of the review.

The Government of Nunavut lists 47 daycares and Aboriginal Head Start Programs in the territory in a 2009 daycare contact information list, with about 970 spaces for children.

But many parents face a lengthy waiting list to get their children into daycare centres.

Currently, through the Daycare Act, daycares have to meet stringent regulations in order to open up for business. These include hiring staff who can pass criminal record checks, undergoing building inspections, and passing inspections by early childhood program officers.

But Ugyuk said it’s a mixed bag of issues when it comes to pre-kindergarten care in Nunavut because daycares sometimes also lack managerial experience.

“I know the bigger centres have a lack of spaces, and the smaller communities, they have space, but they have problems running the daycare,” Ugyuk said.