“We’re quite anxious to get this thing going” 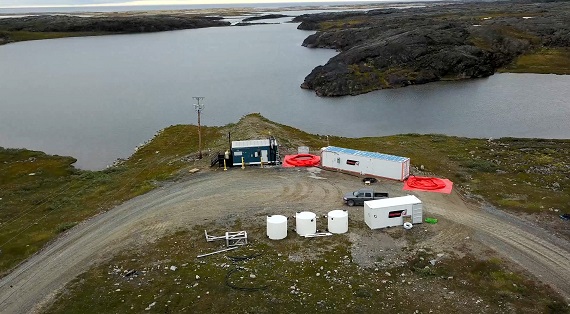 Whale Cove’s new filtration system, including the white seacans pictured here, has finally been installed along the community’s freshwater lake. The new temporary system, designed by the firm Filterboxx Water Solutions, is meant to filter out the coliform bacteria that’s been detected in the community’s freshwater over the last few summers. (PHOTO COURTESY OF N. BLACHFORD/GN)

The Government of Nunavut issued on Aug. 17 what it hopes will be its last boil water advisory for the community of Whale Cove.

The Kivalliq community of about 400 has had an ongoing issue with the presence of coliform bacteria in its freshwater source through the summer months for several years now, though hamlet officials have yet to understand the cause.

In response, health officials have issued boil water advisories for residents over the past four summers. In 2017, the boil water advisory lasted a total of four months, from late June through until early November.

That prompted the GN to purchase a $500,000 water filtration unit last year, though the hamlet didn’t have time to have it installed before the winter.

Crews just completed the installation of the new unit last week. It includes a new ultraviolet light filtration system with holding tanks, located at the freshwater source, a lake about three kilometres outside the community.

The last step before the system can begin to operate is a water analysis, said Ian Copland, the hamlet’s senior administrative officer, adding that a sample has been sent to Winnipeg.

“If everything goes well, we should be able to go off this boil water advisory next week,” Copland said.

“We’re quite anxious to get this thing going.”

In the meantime, Nunavut health officials maintain a boil water advisory for the community, which means residents should boil any water they plan to drink or cook with.

Officials suggest that residents sponge bath infants or people who are vulnerable to illness, so they don’t swallow any water.

Whale Cove’s new filtration system, purchased through the firm FilterBoxx Water Solutions, has a roughly three-year lifespan, which means the GN will have to have a more permanent solution in place by 2021.

The GN’s Department of Community and Govenrment Services said that planning for the new infrastructure is already underway.

The system is also temporary in the sense that it’s not insulated and can only operate in the summer and fall months.

So the hamlet will have to decommission the system before winter and reconnect it again at the end of the spring, Copland said.

That won’t impact water quality, he noted, as the recurring bacteria in Whale Cove’s water system has only ever appeared in the warmer months.