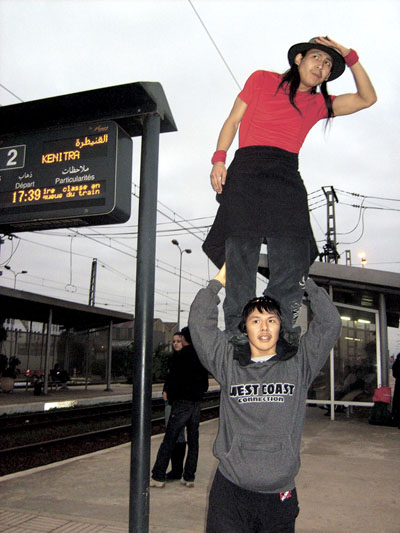 The late Solomon Uyarasuk, top, stands on the shoulders of Artcirq member Jacky Qrunnut at a train station in Morocco, en route to Timbuktu, Mali during an Artcirq visit to the Festival au Desert in January 2008. (FILE PHOTO)

The people of Igloolik will finally get a chance to learn how and why 26-year-old Solomon Uyarasuk died Sept. 23, 2012 inside an RCMP jail cell in Igloolik.

The Office of the Chief Coroner of Nunavut announced July 18 that they will hold an inquest into Uyarasuk’s death in Igloolik, from Nov. 24 to Nov. 28 this year.

Inquests are always mandatory whenever a person dies while in police custody. They may also be held to investigate deaths that are unexplained or unnatural.

The purpose of an inquest is not to find fault but to establish the cause of death.

In Nunavut, inquests are usually held before a six-person jury. These coroners’ juries often make recommendations aimed at avoiding similar deaths in the future.

Uyarasuk, an artist, singer, filmmaker and popular member of the Artcirq performance group, died Sept. 23, 2012 after he had been arrested by police.

Members of the Ottawa Police Service investigated afterwards, but have not made their findings public and have not provided information to Uyarasuk’s family.

And though it’s commonly assumed he died by suicide, neither the RCMP nor the Nunavut coroner’s office have stated the official cause of Uyarasuk’s death.

This, in turn, led to widespread suspicion and frustration in the community, and repeated demands for information and for a coroner’s inquest.

Louis Tapardjuk, then the MLA for Amittuq, asked repeated questions about the matter at the Nunavut legislature in 2013, demanding that the Nunavut justice department set a date for an inquest.

Tapardjuk said his constituents received no information about Uyarasuk’s death and that “lengthy delays can have a traumatic impact on the relatives of the deceased, especially close family members.”

Marie-Hélène Cousineau of Arnait Video Productions is now working on a documentary on Uyarasuk’s death with co-director Susan Avingaq of Igloolik.

In September of 2013, Cousineau told Nunatsiaq News that Uyarasuk’s family has been frustrated by the lack of information.

She said the production company was not allowed to see a copy of the autopsy report and received no information from the Ottawa Police Service investigators.