“You shot him right in the middle of the forehead, right?” 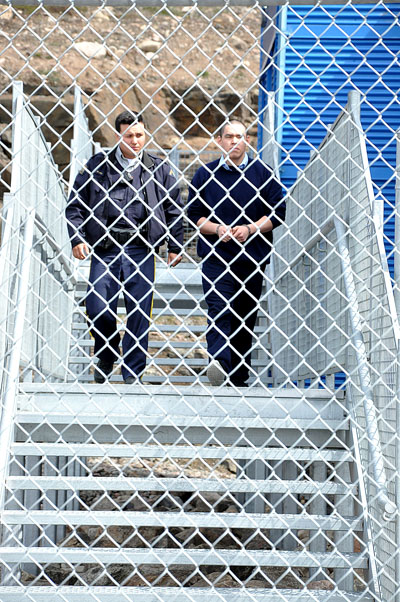 Peter Kingwatsiak testified at his first-degree murder trial in Iqaluit June 26 that he does remember many details from the shooting death of his step-brother in 2010, contradicting earlier testimony, when he said he couldn’t remember much because he was blacked out from sniffing gasoline.

Crown prosecutor Barry McLaren led Kingwatsiak through the events that unfolded in Cape Dorset on the early morning of Sept. 20, 2010 in the house of Mappaluk Adla, moments before Kingwatsiak shot Adla in the forehead from close range with a .22-calibre rifle.

“You remember coming into the house?” McLaren asked.

“You remember seeing Mappaluk lying on the ouch?” the lawyer asked

“You remember you had a gun?”

“You remember it was loaded?”

“You remember that Mappaluk may have started getting up from the couch?”

“Do you remember pulling the trigger?”

On June 24, Kingwatsiak testified before Justice Bonnie Tulloch, who is presiding over the judge-alone trial at the Nunavut Court of Justice in Iqaluit, that he didn’t remember any of the events in Adla’s house because he was blacked out from sniffing gas at least five times over a period of a few hours.

McLaren encouraged Kingwatsiak to try to remember what happened in Adla’s home.

But Kingwatsiak adamantly denied aiming the gun at Adla’s forehead, even after the prosecutor showed the accused a picture showing Adla, dead, with a single bullet wound in the middle of his forehead.

“You shot him right in the middle of the forehead, right?” McLaren asked.

“Now that I’ve seen the photo I know that’s what happened.”

“Are you saying that when you shot Mappaluk you only meant to hurt him?” McLaren asked Kingwatsiak.

“Was it an accident that it went into the middle of his forehead?”

“What were you aiming for then?”

“His arm,” the accused testified.

Kingwatsiak said he cared for his step-brother, but that he left quickly after killing him.

“Why did you leave?” Tulloch asked Kingwatsiak, seeking a clear answer as issues with interpretation continue to plague the trial.

“I left there because I know it’s not the right thing to do, to shoot [sic] somebody with a rifle. It’s very serious when you shoot somebody. Maybe because I was scared I just left,” Kingwatsiak answered.

“You left because you knew you’d done something wrong?” McLaren asked, picking up where Tulloch left off.

“You knew you were in very big trouble?”

On Kingwatsiak’s third day of testifying, McLaren continued to press the accused about his jealous rivalry with Adla, who Kingwatsiak said was sleeping with an ex-girlfriend.

It was because Geena Rose Lampron had broken up with Kingwatsiak not long before the shooting, and then rejected him twice in the 24-hours leading up to the shooting, that the accused sniffed gas fumes in the early morning of Sept. 20, 2010.

“No, I can’t say if it had anything to do with Geena,” Kingwatsiak said.

Instead, Kingwatsiak said it was the anniversary of his sister’s suicide that led him to excessive gas sniffing that morning.

When testifying June 25 about his sister’s suicide, Kingwatsiak’s voice broke as he wiped away tears.

McLaren’s cross-examination of Kingwatsiak has already lasted around nine hours, but the prosecutor didn’t finish before lunch recess June 26.

The defence was expected to call an expert witness after the lunch break, after which McLaren was to complete his cross-examination.