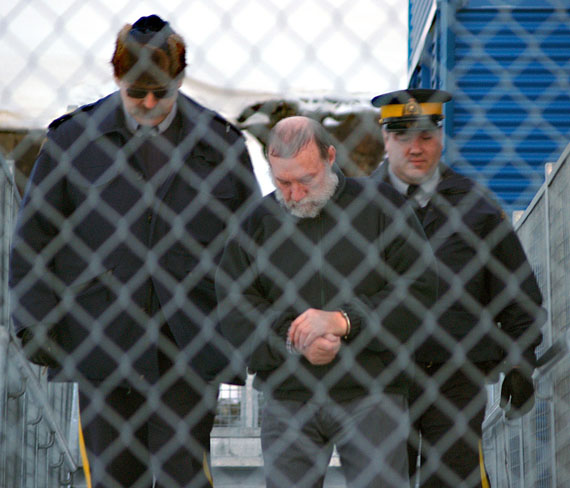 Father Eric DeJaeger leaves an Iqaluit courtroom Jan. 20, 2011, after his first appearance on sexual abuse charges in Igloolik dating back to the 1970s. DeJaeger arrived in Iqaluit after Belgian authorities expelled him from the country when they discovered that he was no longer a Belgian citizen. (FILE PHOTO)

The Nunavut Court of Justice heard stories of child rape, bestiality and defecation as a means to escape sexual assault on Nov. 18, day one of the Eric Dejaeger trial in Iqaluit.

A lean Dejaeger, 66, showed up in court wearing a shaggy grey beard hanging down to his chest and blue standard-issue prison garb.

At the start of the day’s sitting, Dejaeger pleaded guilty to eight charges of indecent assault.

That leaves 69 more charges, most of them sex-related allegations involving minors, to be tried before Justice Robert Kilpatrick, who is sitting alone without a jury.

Reporters and supporter witnesses packed the courtroom to hear from three witnesses whose evidence is related to nine of the 69 charges.

The trial began with a witness who testified about her experience with “Father Eric” inside the Catholic church in Igloolik between 1978 and 1982.

None of the witnesses may be identified.

The first witness said Dejaeger put his hand into her pants and stroked her vagina under her underwear while she sat on his lap in the mass area of St. Stephen’s church.

The woman — a child at the time — said she tried to get off him but he was too strong.

On another occasion, she said Dejaeger grabbed her and took her upstairs to a room inside the church and pulled his pants down.

“And he was trying to put his penis in my vagina,” she told the court.

The woman said she was “crying and didn’t know what to do.”

That’s until she said she defecated on Dejaeger so that she could get away.

Afterwards, she said Dejaeger pulled her pants up, dragged her to a nearby river that was filled with slushy ice and threw her into it.

A friend found her in the river and took her home, where she lied to her mother, saying she defecated in her pants because she had a “stomach ache.”

The witness said Dejaeger warned her and her friends that if they told anyone about what he did to them, they would be taken away from their parents and would never see them again.

The woman also described an incident when he grabbed her and a friend and took them upstairs to a bed. That’s where she said Dejaeger forced the friend to put her mouth on his penis.

“He hit her and tell her not to cry. So I started to grab her, but he hit me instead,” she said.

The witness refused to look at Dejaeger while being questioned by Crown prosecutor Barry Nordin.

She also turned her back on defense lawyer Malcolm Kempt, who stood next to Dejaeger while she answered Kempt’s questions.

The court also heard from two other witnesses Nov. 18.

The second witness, who also refused to look at Dejaeger, described how Dejaeger invited him to approach him while he sat naked from the waist down in a dimly lit room.

The witness, a young boy at the time, said he played with Dejaeger’s naked thighs, but when he put his mouth on Dejaeger’s penis, Dejaeger slapped him across the face.

Dejaeger sat glaring at the witness in court, blinking, with his arms crossed on the table while his face reddened.

The last witness of the day described a scene in a bedroom upstairs inside the church.

“When I think about it, I do my best to forgive,” she told the court before telling her story.

She said Dejaeger asked her to get something from the room, but she fell into a trap.

Speaking mostly in Inuktitut, the witness said Dejaeger entered the room and strapped her legs and wrist to the bed with tape.

The witness said Dejaeger climbed on her back and painfully raped her in the rectum.

“It felt like a needle going through,” she said through a translator.

She said she noticed a fluid on her face afterwards, which she thought had been sperm. The fluid also damaged her ear, she said.

After Dejaeger raped her, the witness said, she said he never allowed her to enter the church again.

She said Dejaeger told her never to tell anyone about the incident.

The witness also described an incident in a nearby shed where she and a few others saw Dejaeger have sex with his dog from behind.

After the Crown questioned her, there wasn’t enough time left for the defense lawyer to cross-examine her and court adjourned for the day.

That’s when the witness broke down in the witness box. She turned her head away from Dejaeger, rested it against the back of the wooden box and cried loudly.

Supporters in the courtroom consoled her and she wiped away tears while walking out.