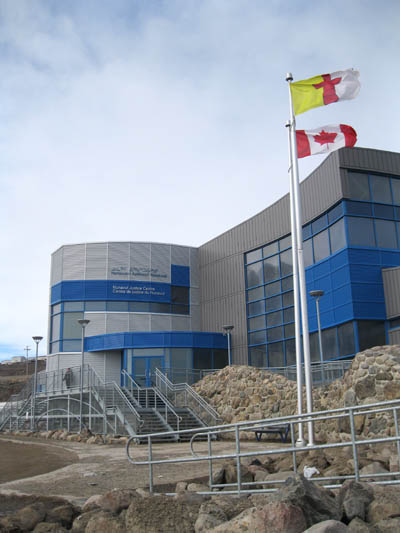 Justice Robert Kilpatrick of the Nunavut court decided to reserve his verdict judgment on a set of sex charges against Nick Illauq of Clyde River until after he’s reviewed a transcript of a trial held June 24. (FILE PHOTO)

Following a trial held June 24 in Iqaluit, the well-known Clyde River resident, Nick Illauq, must wait until at least mid-July for verdicts on a series of sex charges arising from allegations that in early 2010 he molested a 14-year-old girl and offered her liquor in exchange for sex.

Illauq, 35, has served as a hamlet councillor and deputy mayor of Clyde River and is the creator of the popular Facebook group, Nunavut Hunting Stories of the Day.

And through his membership in a local climate change committee, he represented Nunavut on an international group called Many Strong Voices, in work that took him to meetings in such places as Washington, D.C.

He’s part of a larger group of Clyde River men involved in a complex set of sexual abuse allegations made in 2010 after two severely traumatized young complainants made certain disclosures while receiving treatment at a residential care centre in Saskatchewan.

The Crown is proceeding against Illauq by summary conviction and against most of the others by indictment.

The complainant in Illauq’s case, a teenage girl known only as “LEQ,” gave her evidence June 24 through a video link while she sat in a room outside the courtroom.

She said that one night in early 2010, while she and another girl were walking home late at night, Illauq pulled up beside them in a red truck and offered them a ride home.

But instead of taking them home, he drove the two girls to the airport runway. LEQ sat beside the passenger door and the other girl, LENQ, sat in the middle.

In response to questions from Crown lawyer Doug Garson, LEQ said Illauq asked the girls to trade places, so that she could sit beside him.

“He said I was cuter,” LEQ told court. At the time, LEQ had turned 14 less than two months earlier. Illauq was 32.

While parked at the airport, Illauq offered them home brew liquor from a bottle he carried in the truck, LEQ told court.

The other girl, LENQ, described it as “pink liquid.”

“He said it was home brew he makes every week,” LENQ said.

But LENQ said she did not see the attempted molestation that LEQ described in her evidence.

LEQ told court that after the girls traded places, Illauq tried to kiss her and fondle her thighs near her vaginal area, she said.

LEQ also said Illauq’s common law spousal partner, Eleanor Arnakak, afterwards confronted her in the porch of the Aruja Store and tried to beat her up.

In the other incident, also in early 2010, LEQ found herself alone with Illauq in the back seat of a hamlet SUV at around 10 p.m. one evening after he had driven another person home who had been with them earlier.

Illauq drove LEQ to a secluded spot near the local gas station and joined her in the back seat, she told court.

There, he pulled out a 60-ounce bottle of Smirnoff vodka, offered her a drink and tried to kiss and touch her, LEQ said.

“He wanted to have sex with me for vodka,” she told court.

Under cross-examination from defence lawyer Laura Stevens, LEQ said she pushed Illauq away from her and that he wasn’t able to actually kiss her. She made a big sweeping motion with her left arm to demonstrate how she did that.

That incident ended when Arnakak, Illauq’s girl friend, showed up and opened the passenger door of the hamlet vehicle. When LEQ got out of the vehicle, she said Arnakak punched her in the mouth.

“It’s not very nice to see someone trying to cheat on you,” Arnakak, who was called as a witness, told court.

Arnakak said that when she opened hamlet vehicle door, Illauq and LEQ were just “sitting there.”

In their closing statements, the two lawyers agreed to an effective dismissal on the sexual interference charges, since the evidence shows that because LEQ pushed him away, Illauq never managed to kiss or touch her.

But Garson said that at the very least, Illauq should be found guilty on the invitation to sexual touching charges.

“He asked her for sex in exchange for alcohol and she was 14 years of age,” Garson said.

And Garson also said the court should consider convicting Illauq for sexual assault.

But Stevens disagreed, saying although the evidence may point to “an invitation,” there is reasonable doubt that either of the two incidents amount to sexual assault.

“To fashion a 271 [sexual assault] out of that is a serious stretch,” Stevens said.

Justice Robert Kilpatrick said he wants to look at a transcript of the trial before he issues a verdict, and that he will likely do a written judgment.

The case is scheduled to return to court July 15, along with some other sex-abuse matters involving men from Clyde River.

The two girls who gave evidence against Illauq have returned from Saskatchewan and now live in another Nunavut community. Their identities may not be published or broadcast.