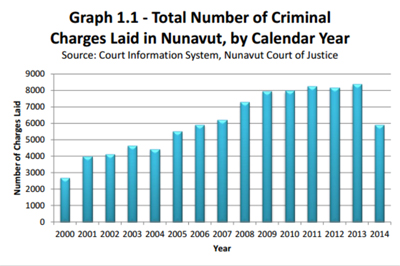 This graph shows the total number of criminal charges laid in Nunavut in 2014 dropped noticeably from the previous year. (COURTESY OF NCJ)

The Nunavut Court of Justice saw a major drop in criminal offences against Nunavummiut in 2014, a new court report reveals.

Last year, a total of 5,896 charges were laid in Nunavut — the lowest number the territory has seen since 2006.

But a disclaimer in the report notes the potential for errors in the court’s report, given that its data is compiled externally.

The report, titled Sivumuaqpallianiq: The Way Forward, is the court’s third annual report, providing an overview of the court’s operations and also insight into the extent of crime across the territory.

Criminal charges laid against both adults and youth were down from previous years: the court noted 5,445 adult charges and 451 youth charges in 2014 — the lowest number of youth charges the court has seen since 2000.

The exception was Cape Dorset, which saw the second-highest number of charges last year at 634, although its population of 1,300 is much smaller than that of Rankin Inlet (405 charges), Arviat (288 charges) and Cambridge Bay (267 charges.)

The report is careful to point out that the number of new charges laid in any given year does not reflect the total volume of charges processed in the court that year, because many serious charges can take years to wind their way through the system.

The four homicide files opened in 2014, for examples, have yet to be fully processed.

From 2013 to 2014, the report notes a slight increase in the average length of time adult offenders spent in remand — the time between their first and last court appearances — up to 57 days.

At the same time, the court saw a sharp decrease in the average time youth offenders spend in remand, from the first to last appearance.

In youth court that average time dropped from 182 days to 148 days — likely attributable to the court doubling its frequency of Iqaluit sittings in 2014, the report said.

But that time could still be shaved down, the NCJ said, pointing to ongoing delays in preparing pre-sentence reports, which can take community corrections staff at least six weeks to prepare.

In 2014, custody was the most frequently imposed sentence on adults, at 36 per cent, while another 27 per cent received probation.

The reverse was true for youth sentences, 73 per cent of which received probation in 2014.

Those files include child custody and access cases; child or spousal support or division of matrimonial property.

The report notes a steady decrease in those files in recent years: in 2014, the number of files opened was one-fifth that of the number opened in 2011.

Finally, the court report showed the territory’s number of resident judges has sat steady at six since 2012, up by just two from when the territory was created.

Those six judges are augmented by a large number of deputy judges who are frequently called in from southern courts to assist.

But when the court reviewed its roster of 91 deputy judges last year, it discovered that, due to retirement and medical issues, only 49 functioning deputy judges remain.

The court said it is now attempting to recruiting more deputy judges.