Nunavut diamond project near Iqaluit prepares for next exploration phase 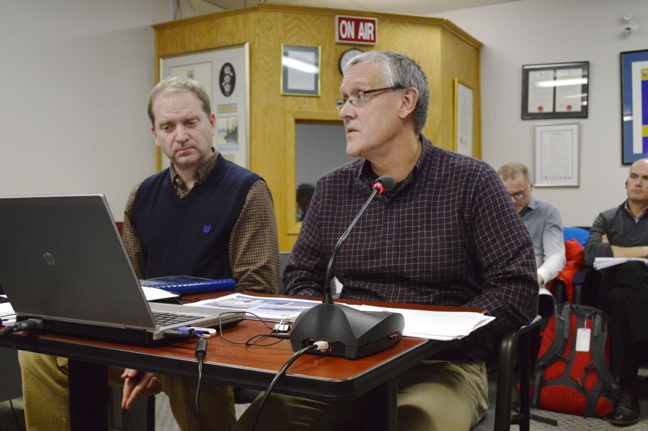 Tom Peregoodoff, right, president of the Vancouver-based Peregrine Diamonds, with the company’s lands and community manager David Willis, update Iqaluit city councillors Nov. 22 on the next phase of exploration at their Chidliak property, 170 kms north of the city. (PHOTO BY STEVE DUCHARME)

Peregrine Diamonds Ltd. executives told an eager Iqaluit City Council Nov. 22 that work toward developing a diamond mine at their Chidliak property is set to hit a new level of intensity, following a promising early economic assessment completed at the site.

Both parties now have their eyes fixed on the future possibility of diamonds on the soles of their shoes.

Peregrine Diamonds President Tom Peregoodoff, appearing as a delegate, says the decision to pursue further study will likely mean millions of extra dollars circulating through Iqaluit, which is roughly 170 kilometres south of the potential mine and the nearest supplier of materials.

“It will cost between $50 and $75 million to go from here to where we need to get to,” Peregoodoff said, eyeing potential mine operations commencing in the next four to eight years.

Peregrine Diamonds estimates the mine, once fully operational, would create between 275 and 325 jobs, shared between the two closest communities of Iqaluit and Pangnirtung, which are roughly equidistant, north and south, of the Chidliak site.

The mine’s lifespan is estimated at 10 years, and would require a capital investment of at least $486 million to build, says the company’s preliminary economic estimate, released this past summer.

Peregoodoff said the mine’s Inuit Impact and Benefit Agreement—which has yet to be negotiated—will probably mirror similar agreements inked by mines in the Northwest Territories.

“Those mines have roughly 30 to 40 per cent northern hires, of which the majority are Inuit or First Nations,” he said.

As operations expand, Peregoodoff says an “easy opportunity” would be for Peregrine Diamonds to partner with Nunavut Arctic College for students to conduct water sampling and other baseline tests.

“Its crazy to be shipping water samples down south when the requirement to establish a lab is not that great and we have the Arctic College, which is setting itself up as a technological college to support exactly those types of activities,” he said.

In 2017, Peregrine Diamonds will spend between $15.5 and $17 million developing the Chidliak site and conducting additional bulk sampling and pre-feasibility studies.

That will mean reopening the groomed winter trail that Peregrine Diamonds has used in the past—maintained free of charge—and accessible to recreational users and hunters.

City councillors learned that Peregrine Diamond’s request to groom a road accessing the trail from within the municipality is currently before the city’s planning department.

In addition to the municipal access, Peregoodoff says the company will need a staging area to prepare and load supplies near the Road to Nowhere for approximately eight to 10 weeks.

Peregoodoff estimated that his company has spent about $23 million in Nunavut so far in the project, with the bulk of that money spent in Iqaluit.

“I was amazed when I heard what you were contributing to our community,” Iqaluit Mayor Madeleine Redfern told the delegation.

Peregrine Diamonds, a Vancouver-based company, has been prospecting the Chidliak area since 2003, identifying the ancient kimberlite pipes that produce diamonds.

Kimberlite is a mineral, often found in cylinder-shaped structures, produced by volcanic activity within the earth’s crust millions of years ago, that sometimes contain diamonds.

So far, 74 such sites have been discovered at Chidliak, with two—dubbed “CH 6” and “CH 7”—showing the most promise for development.

CH 6 alone may contain 11.39 million tonnes of material, with an estimated 1.62 carats per tonne above the 1.18 millimetre-grade cutoff, according to Peregrine Diamond’s recent mineral resource estimate.

“This is just two of the 74 kimberlites. We believe that there will be more kimberlite proven to be economic and that the mine life will be extended [beyond a 10-12 year lifespan],” Peregoodoff told city council.

Peregrine Diamond’s Chidliak property is comprised of about 577 separate claims, covering an area of more than 564,000 hectares of land.

The winter trail used by the company roughly follows the same path of the traditional Iqaluit-Pangnirtung trail.

However, if the mine reaches later development stages, that trail will have to be replaced by an all-season road.

“Because of the lay of the land, the number of river crossings, the preferred route for that is actually offset from the winter trail and about 20 km shorter,” he said.

The next phase of Peregrine Diamonds work at the Chidliak site is set to begin in February 2017, continuing until spring.