“They need to practice what they preach” 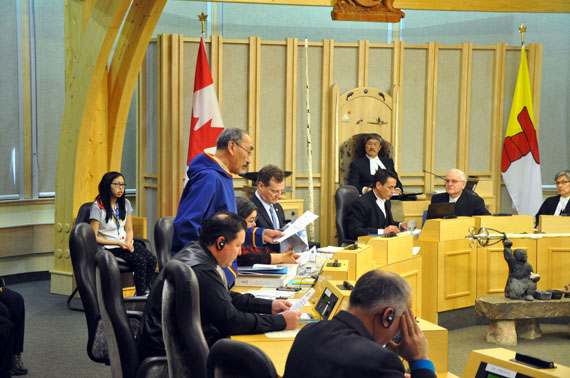 Education minister Paul Quassa is urging the standing committee to bring its concerns to the legislature spring sitting before it scraps Bill 37 entirely. “We have to give Nunavummiut the opportunity to hear the pros and cons of this….before we come to any kind of conclusion,” he said. (PHOTO BY SARAH ROGERS)

Nunavut’s Education Minister Paul Quassa is appealing to members of the Legislative Assembly to bring their concerns about Bill 37 to the legislature’s spring sitting.

The Nunavut legislature’s Standing Committee on Legislation, tasked with reviewing the controversial amendments to the territory’s Education Act and its Inuit Language Protection Act legislation, has said it will recommend the bill not proceed.

MLAs met to review the bill behind closed doors May 4 and May 5. Committee chair Tom Sammurtok said of the 40 written submissions the committee received, only one voiced support, in part, for the proposed amendments.

“With the submissions we received, it was immediately obvious there was no support at all for Bill 37,” he said. “So we decided, let’s put out the notice that we’re not prepared to support this.”

Sammurtok named the same key issues that have been flagged since the legislation was tabled: Inuit language rights, the legislated deadline to implement Inuktut in Grades 4 through Grade 9 and a lack of Inuit teachers in the system.

At the spring sitting of the legislature, Sammurtok intends to table the submissions, at which point he’ll likely put forward a motion suggesting Bill 37 not proceed.

Sammurtok said all 13 members of the standing committee agree the bill should be scrapped. They form a clear majority in the house, which is otherwise made up of seven cabinet ministers, the premier and the speaker.

“At this point, the committee is of the opinion that we’ll just let this legislation die,” he said. “Maybe sometime in the future it will be revived.”

“We’re hoping the assembly as a whole will accept our recommendation.”

But Quassa said he is open to revisiting any part of the legislation.

“It’s not law yet, so we have an opportunity to change it and meet some of the concerns the standing committee might have,” Quassa said.

“We have to give Nunavummiut the opportunity to hear the pros and cons of this… before we come to any kind of conclusion.”

Quassa called the standing committee’s recommendation unusual, suggesting this is a first time in Nunavut that MLAs would opt to scrap a bill before it goes to third reading.

The minister went further and said the committee’s decision goes against the guiding principals of Inuit Qaujimajatuqangit; in this case, piliriqatigiingniq, or collaboration.

“We do talk about the importance of IQ,” Quassa said. “This time around, the way they’ve decided not to proceed with the bill… does not follow that process [of] working together. They have to [practice] what they preach.”

Quassa responded to often-repeated criticism over the legislation’s delay in rolling out Inuktut instruction past Grade 3.

With this current government’s mandate coming to an end in the fall of 2017, Quassa said it wasn’t realistic to keep the goal of delivering Inuktitut and English to students from Grades 4 through 9 by 2019.

“2019 is coming up. Did we want the next government to be stuck with lawsuits that could come around if we don’t meet that deadline?” he said.

“These are things the standing committee should seriously talk about.”

Should Bill 37 die in the coming weeks, it will end a three-year effort to update Nunavut’s education and language legislation.

Quassa said his department started a consultation process in the spring of 2014, with the mandate to draft and pass amendments within the life of this government.

“I believe the Department of Education did what it was requested to do,” he said.

“It’s unfortunate that at the last minute—without even given the opportunity to give our reasoning on these amendments—they just cut it short.”