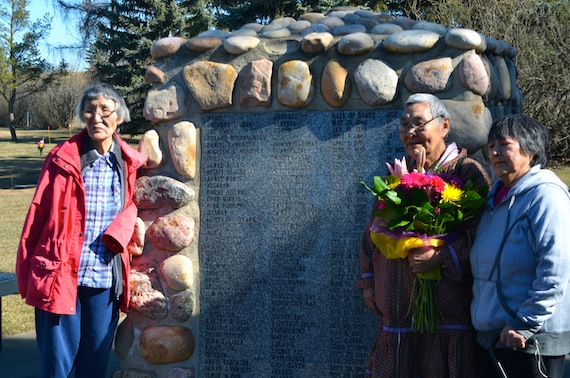 Mabel Etigik, Annie Atighioyak and Mary Avalak stand next to the cairn honouring the former patients at the Charles Camsell Hospital in Edmonton are buried at the St. Albert cemetery in unmarked graves. (PHOTO BY BRENDAN GRIEBEL) 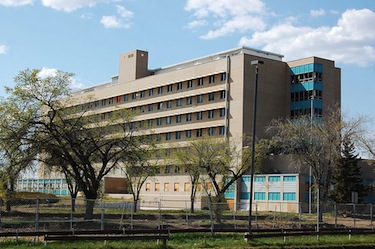 The Charles Camsell Hospital in Edmonton as it looked in 2009. (PHOTO/ WIKIPEDIA COMMONS) 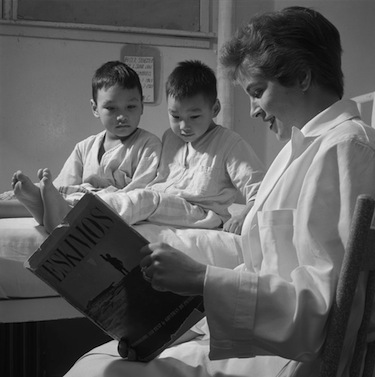 “Nurse Gallagher enchants two little Eskimo lads with a story about Eskimos at the Charles Camsell Indian Hospital, Edmonton, Alberta,” says the cutline on this photo from Collections Canada. 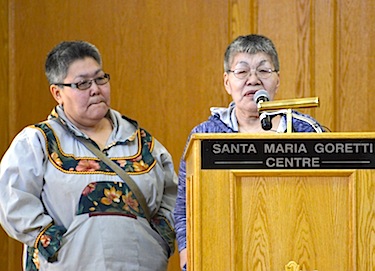 Cathy Aitaok and Louisa Baril of Cambridge Bay talk April 1 at a symposium on the Charles Camsell Hospital. Baril spoke about her father, Elulik, who went south in 1960, never returned and now lies in an unmarked grave at a Catholic cemetery in Edmonton. (PHOTO BY BRENDAN GRIEBEL/KHS)

Green grass, a spring sun so warm you didn’t need to zip up your jacket, and the faint sound of wind chimes in the air: That’s what greeted a group of women from Cambridge Bay earlier this month at a cemetery near Edmonton.

They arrived with a bouquet of flowers to lay in a place they had never before seen, and to pay their respects to family members, many of whom they’d never met, who died far from their homes in the Arctic while receiving treatment at the Charles Camsell Hospital in Edmonton.

Mabel Etigik, Mary Avalak, Annie Atighioyak, Bessie Joy and Pamela Gross visited a cemetery in nearby St. Albert where many Inuit are buried in unmarked graves: 98 in all, including 31 children, aged four and younger, including infants who may have contracted tuberculosis from their mothers.

“Commemorating the resting places of those who have been called to the home of the Great Spirit from the family circles of Indian (Dene and Métis) and Inuit peoples. The majority died of Tuberculosis at the Charles Camsell Hospital between 1946 and 1966. Transportation difficulties to areas of origin made it necessary for burials at this location,” reads the inscription on a cairn at the cemetery, where elders Etigik, Avalak and Atighioyak, all former TB patients at the Camsell hospital when they were children, posed for a photo.

Seeing the unmarked graves at Anglican cemetery was bittersweet. Yes, there were tears, but the visit was both emotional and uplifting, said Pamela Gross, program manager for the Kitikmeot Heritage Society.

Those from Cambridge Bay who are buried there include:

The Camsell hospital, named after Charles Camsell, a geologist and mapmaker in Canada’s North, opened in 1946. It was better known as the “Indian Hospital” — although many Inuit also came there because they were ill with TB.

During the TB epidemic of the 1950s and early 1960s, at least one-third of Inuit were infected with TB. In 1956, more than one in 10 Inuit in southern Canada hospitals where the average length of stay was two-and-a-half years.

Among those who were treated at the Camsell hospital: the late Inuit champion Abe Okpik, who headed “Operation Surname” for Inuit in the late 1960s, and John Amagoalik, often called the “father fr Nunavut,” who wrote about his 14 months there in Nunatsiaq News column, A little corner of Canada.

The Camsell hospital, now slated to become a residential complex, closed in 1996 —  condemned mainly due to the toxic asbestos used in its construction.

Most recently, the derelict building has been known as a “spooky” place. Some allege horrors took place at the Camsell hospital and that here is a mass grave of Aboriginal children located in the former staff garden.

Danielle Metcalfe-Chenail, Edmonton’s third “Historian Laureate” and author of the Ghosts of Camsell blog on the hospital, told Nunatsiaq News that one thing is certain, that this hospital’s legacy still affects many today.

Metcalfe-Chenail, whose research has helped families in Nunavut connect with relatives who died at the Camsell hospital, said she’s committed to looking into all the rumours and stories about the hospital — to aid reconciliation with its past, she said.

During the visit to Edmonton, the Cambridge Bay group also participated in a symposium on the Camsell hospital, an event designed to bring together researchers and others interested in the history and legacy of the hospital, “with an eye towards reconciliation.”

Mini Aodla Freeman, author of the recently-reprinted book, “Life among the Qallunaat,” who contracted TB and worked at a Hamilton, Ont. sanitorium as a translator for other patients, opened and closed the Camsell symposium.

Among other things, those at the gathering heard from Louisa Baril and Cathy Aitaok of Cambridge Bay, who reminded everyone that not all patients at the Camsell hospital suffered from TB.

Joseph Elulik, Baril’s father and Aitaok’s grandfather, went south to the hospital from Perry River in 1960 when Baril was 17. He was to be fitted with special footwear because he’d lost his toes to frostbite as a young man.

But Elulik never returned. After nine months at the Camsell hospital, he died, and, for years, no one knew where he had been buried.

During their visit to Edmonton, Baril, her sister Jennie Heyes, son George Aitaok, and Cathy Aitaok were able to visit the Catholic cemetery in Winterburn, in another area of Edmonton, where Elulik lies buried in an unmarked grave.

The symposium also brought the unexpected reunion of two former patients at the Camsell hospital: Atighioyak ended up sitting next to another elder, Lillian Shorty — the two had been patients when they were nine-year-olds‚ and both recognized each other right away.

The symposium’s 60 participants discussed how the history of the Camsell hospital should be acknowledged, perhaps with a monument in front of the building or a healing garden.

Or, as Cathy Aitaok suggested, an inuksuk could be built at the Catholic cemetery where First Nations are already recognized with a monument — but there’s nothing for Inuit.

Her grandfather could use an inuksuk, Aitaok told Nunatsiaq News.

The Kitikmeot Historical Society wants to work on a travelling exhibit to show the history of TB to the communities, as soon as the Royal Alberta Museum, now under renovation, re-opens next year, Gross said.

That exhibit would include many objects made by Inuit patients when the hospital operated an occupational therapy program for Aboriginal patients.

In 1990, the hospital donated a collection of over 400 arts and crafts items made by patients in the program to the Royal Alberta Museum.

While in Edmonton, the visiting Ikaluktutiamiut looked at these items — including miniature kayaks and ivory carvings — and others from the Douglas B. Lord collection of Inuit artifacts, collected in the 1950s for the University of Alberta’s art department by Lord, a school teacher at Kugluktuk and Fort Simpson.

Aitaok and her mother were also able to see the flat-bottomed leather prosthetic boots designed for Elulik, who, Aitaok said, had managed for years to hunt and travel by dog team without them before he headed to the Camsell hospital and never returned.

If you want more information on the Camsell hospital history or to share your stories and questions, you can go to Ghosts of Camsell blog. 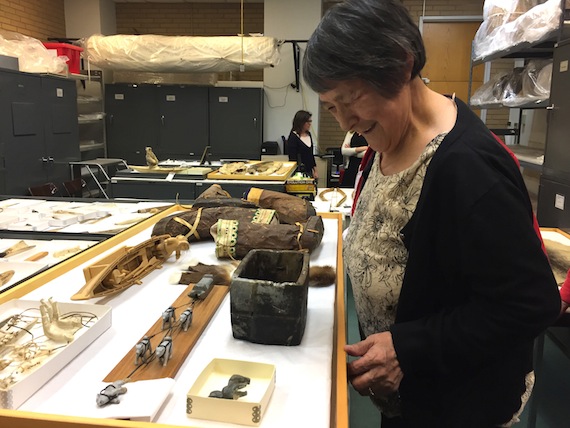 Mary Avalak examines Inuit artifacts from the Doug Lord collection at the University of Alberta. (PHOTO BY PAMELA GROSS)