“I grew up hearing that Inuit are number one priority, but I never saw that — it was just a lie” 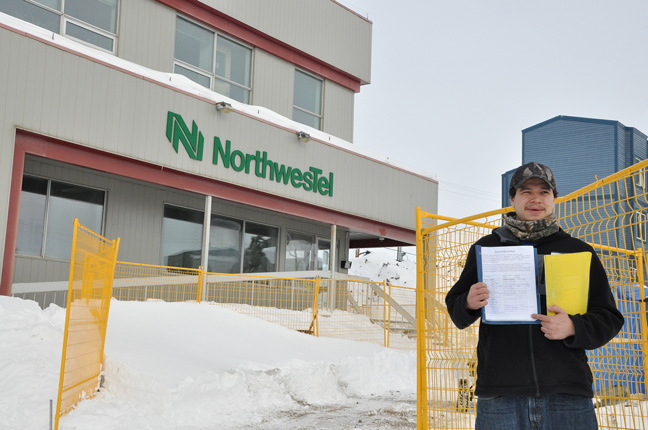 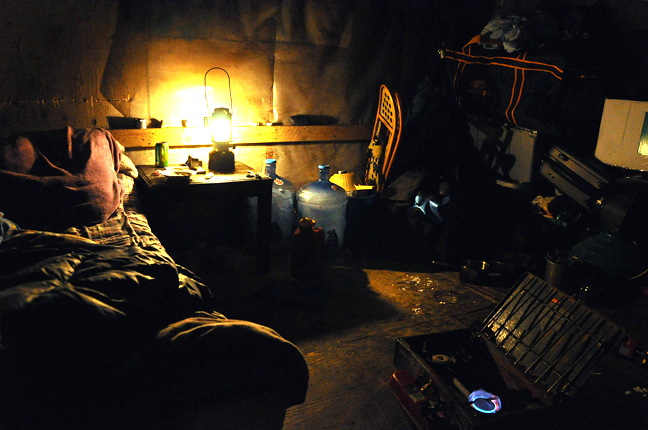 A windowless shack on the beach, and home for seven years to one of Iqaluit’s homeless. Iqaluit’s Qaumariaq Inuqtaqau is hoping the Government of Nunavut can do more to compel local businesses to hire people like the homeless man who lives in this shack. (PHOTO BY THOMAS ROHNER)

Inuit in Nunavut won’t feel at home in their own territory until local employers stop flying in southern workers to fill jobs, especially jobs with staff housing.

That’s according to Iqaluit-born Qaumariaq Inuqtaqau. He’s trying to change what he considers a common and racist practice.

Inuqtaqau, 29, a slight Inuk with a voice that outsizes his stature, is on a mission to help elders, the homeless, and to uphold Inuit human rights.

To do that, he wants to put the territorial and federal governments in the spotlight for chronically high unemployment and homelessness rates among Nunavut Inuit.

“How can you call a place home when you can’t even get a job or a home? It screws a lot of people up,” Inuqtaqau said recently, wearing a camouflage hat and neck-warmer, after a long day of going door-to-door in Iqaluit to collect signatures for a petition.

The petition calls on governments to address the unfair — and for Inuqtaqau, the racist — bias in hiring and housing practices in Nunavut.

During the coldest months this winter, Inuqtaqau walked door-to-door in almost every Iqaluit neighbourhood, on feet already scarred and chafed from past frostbite, to collect nearly 1,000 signatures for his petition.

And now, with the help of friends, Inuqtaqau is set to launch his petition online.

“I’m just trying to help my people. I grew up hearing that Inuit are number one priority, but I never saw that — it was just a lie,” Inuqtaqau said.

Inuqtaqau belongs to a generation of Nunavut Inuit whose parents and grandparents were subject to relocations and sent to residential schools.

“Growing up, people would tell me, ‘Be nice to your mom because she suffered a lot, more than most people can suffer.’”

After growing up in Iqaluit and in foster homes in Saskatchewan, Inuqtaqau spent the last four years in his hometown.

Although Inuqtaqau has held a job for the last year and a half at First Air cargo, he spent two of the last four years homeless: not eating for up to five days at a time, and killing pangs of hunger with coffee and cigarettes.

Inuqtaqau’s story is similar to what other homeless Iqaluit residents told Nunatsiaq News in a recent story.

While homeless, Inuqtaqau said he would wander around Iqaluit to find a public porch to sleep on, or bribe friends with cigarette butts he collected to sleep on their couch.

“I didn’t like asking people for help, because they got their own problems. I’m not going to be a freeloader,” he said.

And like many other Inuit, the depression and despair of homelessness and unemployment drove Inuqtaqau to consider extreme options.

“I’ve heard lots of stories of Inuks going to jail, just to get a bed and something to eat. I just wanted to break the law so I could get a bed too.”

Like many Inuit, Inuqtaqau said he has lost a lot of friends — including homeless friends — to addiction and suicide, even though Inuqtaqau tried to help them.

“Growing up, I tried to be like Dr. Phil, but sometimes I don’t have answers.”

Because of racism and hopelessness, Inuqtaqau said he left town a number of times for the South, where he easily found employment.

But the skills Inuqtaqau said he acquired working as a computer technician, construction labourer and restaurant cook haven’t helped him in Iqaluit.

In his experience, companies often don’t hire Nunavut beneficiaries, like him, even for menial jobs.

Derek Reimer is a spokesperson for North West Co. which owns Northmart and Northern Stores and which employs about 800 people in Nunavut, 75 per cent of whom are beneficiaries.

He admits that of the 150 company positions with staff housing, “less than a handful” of those positions are filled by Inuit.

That’s because staff housing is generally reserved for managers who are flown up from the South while the company grapples with how to train more beneficiaries for management positions.

“We have a responsibility, operating in the territory, to ensure opportunities for local individuals to succeed and realize their potential,” Reimer said.

The company has invested “significant resources” in a new initiative to train local managers, said Reimer, but they face a number of up-hill battles.

Literacy and numeracy rates across Nunavut are very low, he said

And Reimer pointed to a 2013 study that said Nunavut’s social income system and federal and territorial tax breaks need to be reformed so these don’t stop beneficiaries from entering the job market.

About four in 10 Nunavummiut rely on social assistance, while more than 50 per cent of beneficiaries live in public housing, according to that 2013 report, commissioned by Nunavut’s Anti-Poverty Secretariat.

And when they get a job, many Inuit see a rise in their cost of living as they lose their public housing and some tax breaks, the report said.

“Funding to support our in-house management training program would allow us to put more resources towards development,” he said.

Even in jobs that don’t require the higher-level of formal education many beneficiaries lack, Inuit are still losing out.

In Iqaluit’s taxi industry, for example, beneficiary employees are almost unheard of.

“It’s not that we don’t want to hire Inuit, it’s that they don’t want to work as taxi drivers,” he said from his garage in the Lower Base area of Iqaluit.

That might be because Inuit drivers get pressured by family members and friends for free rides, said Savard.

Caribou Cabs owns three staff houses with 19 rooms, Savard said, but those are generally reserved for drivers who fly in from the South on a rotational basis — not for local employees.

“I’d like to hire more Inuit, because local customers like to see an Inuk driver, and they know the roads and how to drive in the winter,” Savard said.

Thanks to a wage subsidy program, Savard said a local Inuk is in training to be a mechanic and even a potential partner in the company.

Nunatsiaq News reached out to other Nunavut employers, such as NorthwesTel and Pai Pa Taxi in Iqaluit, but those companies declined to be interviewed.

“Many thanks for your interest, however at this time we will respectfully decline,” said an email response from NorthwesTel, which also refused to give the company’s employment numbers.

Inuqtaqau said the reaction he received from his petition so far — mostly supportive but also angry — has inspired him.

While collecting signatures for his petition in February, a GN office manager yelled at him and threw his petition out the door, Inuqtaqau said.

“I ran like Forest Gump out of that building. But that got me down, because that was the government. They’re supposed to be helping us,” Inuqtaqau said.

“Inuks should have the right to have a safe place, save money for their family, buy hunting equipment. I think that would slow down alcoholism, suicide and crime rates.”

You can visit Inuqtaqau’s petition by clicking here.