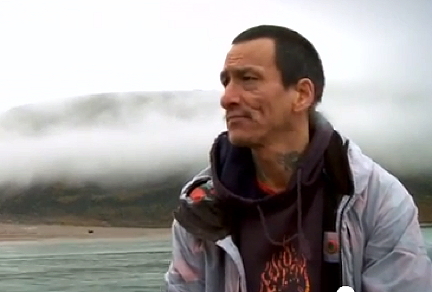 Clyde River filmmaker Mike Jaypoody’s award-winning documentary, Tony: Back From the Brink, tells the story of Tony Kalluk, above, a violent career criminal who turned his life around and became a counsellor in his home community. (PHOTO FROM FILM TRAILER)

A documentary, filmed in Clyde River — and edited and directed by a resident of the north Baffin hamlet — has been named “Best Documentary” at the Yellowknife International Film Festival, which ended Oct. 5.

The film, Tony, Back from the Brink, tells an all-too rare story in Nunavut: an angry, young criminal spends two decades behind bars, but then turns his life around, becoming a mentor and role model within his own community.

“We wanted the film to showcase that even though if you’ve done all these things, that your life can change for the better,” first-time director Mike Jaypoody, working out of the Ilisaqsivik Society’s media centre in Clyde River, told Nunatsiaq News Oct. 9.

“Even with the limited resources in the communities.”

The film, which runs 46 minutes, chronicles the life of Tony Kalluk.

Jaypoody, younger by 15 years, remembers Kalluk coming in and out of Clyde River as he grew up.

The film shows how, after spending more than 20 years behind bars, Kalluk returns to Clyde River to work as a youth counsellor.

“My kids are my teachers now, they’re teaching me to have patience,” Kalluk says in the film’s trailer where he sits in his living room with his wife and two children.

David Harder, a life coach interviewed in the trailer, said he was shocked at the anger on Kalluk’s face when he first met him in a youth detention facility.

“He was short in stature and yet he was extremely violent, and really a scary dude, even at that time of his life,” Harder said in the trailer.

Harder saw Kalluk’s potential, often telling the young Inuk that he would keep believing in him until he believed in himself.

“I get kinda choked up thinking about that, because I remember the look on his face,” Harder says in the trailer.

“All of a sudden his violent face became soft and I thought at the time, maybe that’s the first time he’s had somebody use caring words.”

Jaypoody said the stories Kalluk told during interviews for the film were very touching, but, at the same time, Jaypoody feared he would provoke the anger that lead Kalluk into a criminal and violent life in the past.

“But since he turned his life around, he’s able to talk about the situations that he was in,” Jaypoody said.

“Ever since he’s come back, he’s had some youth looking up to him… and he’s able to have steady clients, youths, who go to him and look up to him.”

The documentary, produced by Piksuk Media, will air on the Aboriginal People’s Television Network on Oct. 13 in Inuktitut and Oct. 15 in English.

It will be re-broadcast by CBC North in the fall of 2015.

Jaypoody hopes to hold a public screening of the film in his hometown, since APTN is not available on local cable, but he said he doesn’t know when that would take place.