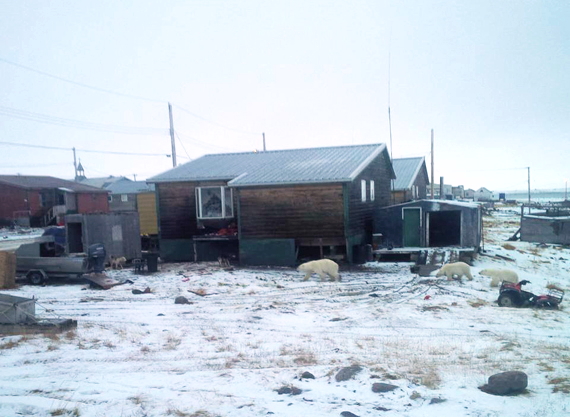 Three polar bears roam beside a house in Arviat in October 2014. (FILE PHOTO)

While many young superheroes and phantasms will be trick-or-treating outside this weekend across Nunavut, children in Arviat will be celebrating their Halloween indoors for yet another year.

“In Arviat, Halloween will be held in the community hall again this year as safety against polar bears,” Arviat North-Whale Cove MLA George Kuksuk said Oct. 30 in a member’s statement.

The Government of Nunavut said in the Nunavut Gazette that the new quota will rise by only four bears, from 24 to 28.

“I asked the minister when he would make a decision [Oct. 27] and he has not informed me, but I have found out through the Nunavut Gazette that he has authorized an increase of 4 [polar bears],” Savikataaq said.

The Nunavut Gazette is a monthly publication of the GN’s department of Justice that documents and announces regulatory decisions made by the territorial government.

The NWMB recommended to Mike an increase of 14 polar bears for the region, raising the total allowable harvest from 24 to 38 animals.

But under the environment minister’s decision they will have to make do with 28.

Many communities on Hudson’s Bay’s west coast, including Arviat, have been overrun by polar bears in recent years.

Since 2011, with funding assistance from the World Wildlife Fund, Arviat has employed a full-time watchman between October and December to spot and scare away polar bears wandering too close to town.

The polar bear situation in Arviat has occasionally led to contentious exchanges between Savikataaq and the environment minister, and Oct. 30 was no exception.

“There has to be a reason. Did he flip a coin? Was he in a bad mood? Why did he not go with the recommendation of the NWMB?” Savikataaq said.

“Head I win, tails you lose. That’s not the case here… The minister has the discretion to either deny or accept a recommendation or otherwise make another decision so that’s where I used my power as minister,” replied Mike.

The minister defended the limited quota increase and explained a survey will be conducted next year to evaluate the bear population.

The exact size and health of the polar bear population in Kivalliq has been a matter of intense debate for years — often highlighting divides between the federal government, the GN and Inuit traditional knowledge.

“Regarding polar bears in Western Hudson’s Bay, if we’re going to manage them properly we would like to keep a stable number of quotas,” Mike said.

The past decade has seen the total allowable harvest of polar bears in the Kivalliq regions fluctuate dramatically.

In 2005 the total allowable harvest for polar bears stood at 56, but by 2011 that quota was limited to only eight animals.

As recently as last year, the GN recommended staying at a quota of 24 bears during an NWMB hearing on the issue in Rankin Inlet in December 2014.