Inuk grad student heading back to Nunavut for CHARS job

“I hope to be a part of this renaissance” 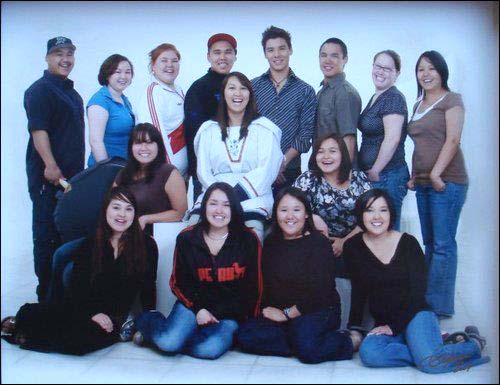 Nunavut Sivuniksavut’s graduating class of 2006-07. Rudolph, pictured in the centre row, far right, called her time at NS a turning point in her education. (PHOTO COURTESY OF S. JANCKE) 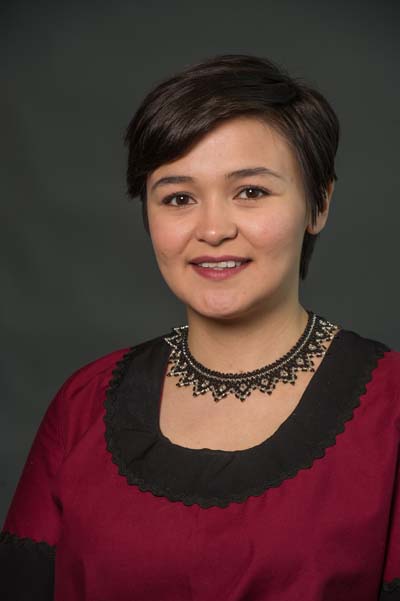 Gjoa Haven teacher and Masters student Angela Nuliayok Rudolph is researching how a relocation policy in the Kitikmeot in the 1960s affected Inuit men, women and youth. (PHOTO COURTESY OF GORDON FOUNDATION)

For a woman who has pursued post-secondary education across North America over the last decade, Angela Nuliayok Rudolph remembers getting off to a rocky start.

As a student at Qiqirtaq School in Gjoa Haven, her home community, Rudolph had trouble connecting with her courses.

“I struggled with social studies because the curriculum wasn’t relevant,” she said. “I remember my Grade 12 exam. There were a lot of questions about the Cold War. It was really U.S.-focused.”

Then a poster in the school’s hallway caught Rudolph’s attention: a group of grinning Inuit students. The poster was promoting Nunavut Sivuniksavut, the Ottawa-based, college-level program designed for Nunavummiut youth.

“That got me excited,” Rudolph said. “It gave me the comfort to know I could do it.”

She enrolled at NS the following year and found that her classes there shed light on what she’d learned in high school and how it fit into her own history as an Inuk.

Rudolph said she learned the role the Cold War played in the development of Arctic regions—such as the creation of the Distant Early Warning, or DEW, line and the progression of Inuit moving into permanent settlements.

“It finally made sense,” she said.

Since she graduated from NS in 2007, Rudolph has made it her mission to better understand Arctic policy and the role it plays in the lives of Nunavut Inuit.

She does that now as a masters student at the University of Alaska Fairbanks, where she studies Arctic and Indigenous policy, and as a Jane Glassco Northern Fellow. Rudolph’s long-term goal is to help build the necessary capacity to position Inuit at the forefront of shaping that policy.

Rudolph, 28, wants to be part of what she calls a “renaissance” among Inuit in Canada.

“There are more and more Inuit going to post-secondary [education] who are learning how to think about and approach things differently,” she said. “They are influencing the Inuit political movement in a new way that we haven’t seen before, such as Natan Obed and his work at Inuit Tapiriit Kanatami. I hope to be a part of this renaissance in a policy framework.”

Rudolph was born and raised in Gjoa Haven by her mom, Rose Nuliayok, and her late father, Ed Rudolph.

She described her youth as typical; she and her two brothers spent a lot of time out on the land as children.

But the family found that harder to do after Rudolph’s father passed away in 2000; she remembers her mother working to build up the confidence to take her children out again.

“We spent a lot of time adjusting,” she said. “We were a two-income household and dropped to one income. It was hard.”

Rudolph’s mother and her home community continue to inform her research and goals, she said.

After Rudolph finished the NS program, she was inspired by the possibility of a more Inuit-focused education system and decided she wanted to teach Inuit youth.

She completed a bachelor’s degree at the University of Lethbridge in Alberta and then a teaching degree at Lakehead University in Ontario.

In August 2014, Rudolph returned home to teach at Qiqirtaq School, an experience she called “surreal and nerve-wracking.”

A year later, Rudolph wasn’t sure her efforts were best placed in the school system. As an educator and researcher, she advocates for the decolonization of education in Nunavut, but doesn’t see much room for that in what she considers a colonial institution.

“I knew if I wanted to do that, I’d have to do that from outside the system,” she said.

Rudolph looked at programs offered through different Arctic universities and opted to do a masters through the University of Alaska Fairbanks’ Arctic and Northern Studies department in 2015, where she received a full scholarship.

“It was an opportunity I couldn’t pass,” she said. “I knew they have a huge Inuit population there. And with Canada passing the Arctic council chairmanship to the U.S., I knew Fairbanks would be a central place.”

Rudolph is using her graduate studies to dig into her own history; her thesis looks at the Perry River relocations of the 1960s and how that policy affected Inuit men, women and youth differently.

The research is personal: Rudolph’s own family was among the relocatees. Her mother moved to Cambridge Bay as a child, later settling in Gjoa Haven.

Rudolph said she hopes to tie her findings to education.

It’s a busy time in her life: her Jane Glassco Northern Fellowship is coming to an end this spring with a final gathering in Yellowknife next month.

With her graduate studies winding down, Rudolph has just accepted a position at the new Canadian High Arctic Research Station in Cambridge Bay, set to open this July, as a policy analyst, a position she will start in August.

Rudolph says she’s excited to work for CHARS at its inception. “I’ll be able to shape something in its infancy,” she said.

After studying outside of Nunavut for so many years, Rudolph said she also feels fortunate to be able to return to her home region.

When she thinks about life ten years from now, Rudolph said she can imagine being settled in Gjoa Haven, as easily as she can imagine doing a PhD in Norway or working for the Arctic Council.

“I guess we’ll see where my ambitions take me,” she said. 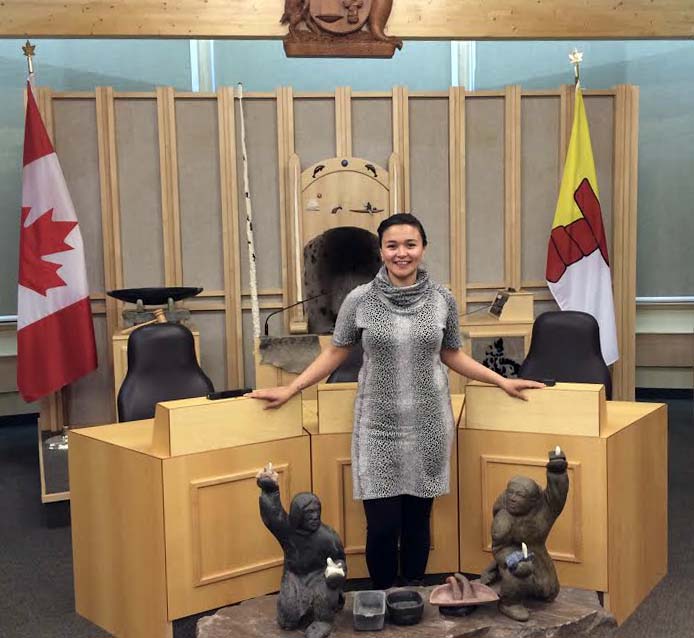 Rudolph visits Nunavut’s Legislative Assembly in 2016 as part of a Jane Glassco Northern Fellowship gathering in Iqaluit. (PHOTO COURTESY OF A. RUDOLPH)