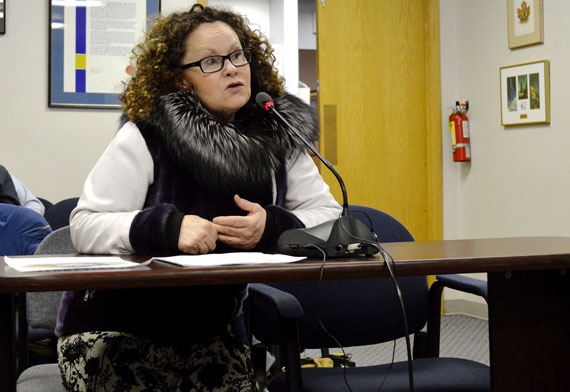 If the Qaggiavuut Society has anything to do with it, Iqaluit’s status as the only northern capital in Canada without a dedicated performing arts centre may soon come to an end.

Fresh from accepting the Order of Nunavut last month, a founding member of the Qaggiavuut Society, Ellen Hamilton, asked Iqaluit City Council March 28 for written support ahead of the society’s new fundraising campaign for a Nunavut performing arts space in Iqaluit.

“We are going to promote aggressively a partnership with the private sector, all levels of government, Inuit organizations, other non-profits, to come together, to work with us, to raise the funds for a performing arts and cultural space in Iqaluit,” Hamilton said.

“The world needs a place that can nurture and support the Inuit performing arts, if not in Nunavut, where else?”

Hamilton also served as team leader for the Qaggiq project, which received the $600,000 Arctic Inspiration Prize in 2015.

Hamilton said the newly unveiled federal budget has funds for a northern cultural space project that the society can apply for, and other foundations have already expressed interest in partnering on the project.

“So we’re here to announce our campaign is beginning now.”

As for a possible location, Hamilton suggested the society may have its eye on lands that will soon become available on Federal Road, a short distances from Iqaluit’s downtown.

A city-run hearing to discuss future uses for those lands is scheduled for March 29 at the Catholic Parish Hall, but Hamilton told Deputy Mayor Romeyn Stevenson that the society will seek a private meeting with the city’s planning and development department to discuss its options.

“We have spoken to the Qikiqtaaluk Corp. as well, because they’re working on a convention centre that has an aspect of a performing arts component,” she said.

“We’re hoping we can partner, but it may be that they’re going one way and we’re going another.”

Hamilton stressed that any future performing arts centre must be accessible—within walking distance—with a mandate to focus on promoting and developing Inuit art but to allow other performers to use the facility.

“We see this as a community place, a social justice place, for youth to go and rehearse and work, for children to do programming in and for all people in Nunavut to go to study the Inuit performing arts,” Hamilton said.

Another possible location for the space could be near Iqaluit beach, near the visitor’s centre and museum, she added.

The Inuit Circumpolar Council and Inuit Tapiriit Kanatami have already lent written support for the project, along with letters from other circumpolar performing arts centres in Reykjavik, Nuuk, Yellowknife, Whitehorse and Alaska.

“They went through this years ago, and now we’re the last one to go through this process, so we’ve been asking for support,” Hamilton said.

“The National Arts Centre has organized all performing arts centres in Canada to be our supporters and they have written us letters of support to say that Canada deserves and needs a Nunavut performing arts space.”

Following Hamilton’s presentation, councillors passed a motion to provide the Qaggiavuut Society with a written letter of support for the project.