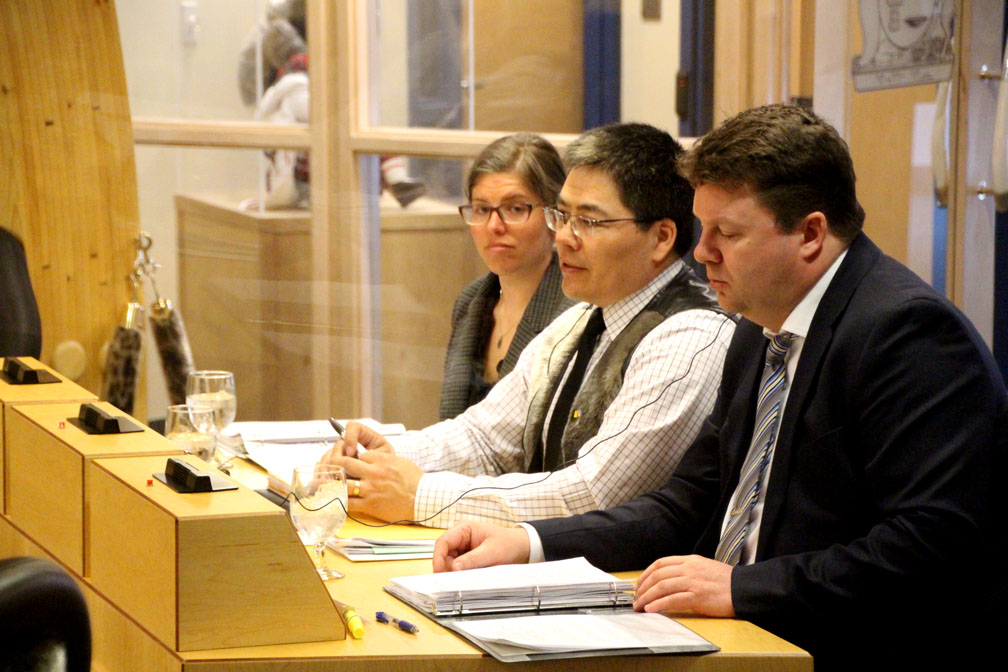 Pauloosie Suvega, the Government of Nunavut’s deputy minister of environment, centre, gave very few concrete answers to questions from MLAs on climate change, during a line by line standing committee review, held April 30 at the Nunavut legislature, of the auditor general’s report on climate change in Nunavut. (PHOTO BY BETH BROWN)

The Government of Nunavut has no target for reducing greenhouse gas emissions, and high costs in the territory will make any hoped for targets difficult to achieve, MLAs learned on Monday, April 30 during a standing committee hearing at the Nunavut legislature.

The regular members gathered Monday afternoon for a meeting of the legislature’s Standing Committee on Oversight of Government Operations and Public Accounts, held to review the auditor general’s recent report on the GN’s record in responding to climate change.

That report, tabled March 13, gave 10 recommendations on how to correct Nunavut’s inadequate response to climate changes that are impacting sea ice and permafrost in the Arctic, said Canada’s auditor general, Michael Ferguson.

The 10 recommendations covered the creation of firm timelines and objectives for climate strategies, and called for better transparency when it comes to public reporting on the GN’s climate change plans.

In the review, MLAs questioned public organizations that were included in the audit—the Department of Environment, Department of Community and Government Services, the Qulliq Energy Corp., the Nunavut Housing Corp. and Nunavut’s climate change secretariat.

“Does the GN have a target for reducing greenhouse gas emissions?” Hudson Bay MLA Allan Rumbolt asked officials at the Department of Environment.

“There’s no target that has been established to date,” the deputy minister of environment, Pauloosie Suvega, said in reply.

“Does the government have any idea when they will be able to be at a point where they can set a target?” Rumbolt then asked.

Suvega could not give a ballpark estimate for when the GN could set such a target.

Right now, there are discrepancies between projections made by the Nunavut government and the federal government on the level of greenhouse gas emissions in Nunavut, Ferguson said.

“It’s important for the department to work with Environment and Climate Change Canada … settling on one way to measure Nunavut’s greenhouse gas emissions,” Ferguson said.

He said the same inconsistencies exist in Yukon.

“It might be a good idea for the three territories to work together,” Ferguson said, when John Main, the MLA for Arviat North-Whale Cove, asked him if there are benchmarks the territory could take from other jurisdictions that have been successful at managing climate change.

GN capacity, or the lack of it, was a common theme in responses given to MLAs from territorial officials during the committee’s line-by-line review of the audit that will continue May 1.

Of seven staff positions funded by the GN for the climate change secretariat, which was set up in 2016, only one of those positions is permanently filled, Suvega said.

One of the other seven spots is filled by a term employee, three are filled by casual workers, while the rest are vacant, he said.

“What is your department doing to hire and fill positions?” asked Arviat North MLA John Main, who later said, “it’s in Nunavut’s favour to be aggressive in terms of climate change.”

“I’m trying to build capacity in the department.… We are working through the hiring process where possible,” Suvega said.

“The individuals that have been working in the secretariat are working very hard.”

An official from the Qulliq Energy Corp. also said that regardless of how many studies are done on energy efficient technology in Nunavut, cost will remain a barrier to replacing and upgrading power stations in Nunavut.

“Our greatest challenge is not only technology,” he said, asking for patience and understanding from Nunavummiut as the organization works to transition to more efficient energy sources.

While his department is responsible for creating policies around climate change, Suvega repeated often throughout the three-and-a-half-hour meeting that it was through communication with “other government departments” that “initiatives,” “strategies” and “action plans” would lead to legislative change.

But Ferguson said he finds all too often in his audits that many strategies and action plans don’t get past the drafting stage.

When MLAs questioned Suvega about plans for updating previous Nunavut climate plans made in 2001 and again 2007, he said “it’s difficult to pin a target date on these documents. It’s clear that all of these documents need to be updated.”

More than one MLA brought up the looming federal government tax on carbon emissions.

But Ferguson said that carbon pricing was outside the scope of his audit, because it has yet to be implemented.

Iqaluit-Tasiluk MLA George Hickes, the chair of the standing committee, said he looks forward to seeing a report on the impact that carbon pricing will have in Nunavut tabled in the coming sitting of the legislature.