“We’d like to see them stay open, but there were no alternatives” 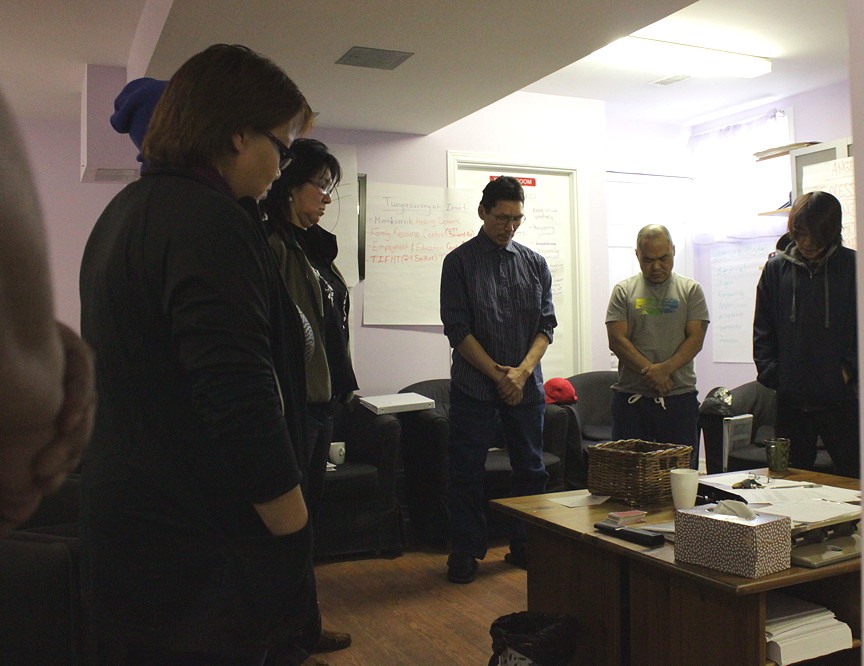 A morning group therapy session in 2013 at Mamisarvik Healing Centre in Ottawa begins with a prayer. Nunavut’s health minister, Paul Okalik, says the GN would like to help Mamisarvik but cannot provide core funding. (FILE PHOTO)

But the Government of Nunavut cannot commit to giving the centre what Mamisarvik needs: core funding.

Tungasuvvingat Inuit (TI), which runs the Mamisarvik treatment centre — one of only two Inuit-specific residential treatment centres in Canada — announced recently that they will have to close March 31 due to a lack of funding.

Rankin Inlet North-Chesterfield Inlet MLA Tom Sammurtok asked Nunavut’s health minister about Mamisarvik during question period in the Nunavut Legislature Feb. 25 — because many Nunavummiut with addictions have had successful outcomes after treatment there, he said.

“Can the minister provide an update on what consideration, if any, has been given to accessing core funding to ensure the ongoing operation of the Mamisarvik Healing Centre after March 2016?” Sammurtok asked on the second day of the winter sitting.

Okalik’s response did not address the possibility of core funding.

“I met with senior level people [from the healing centre] in November as to how we can provide more support,” Okalik replied.

“We’d like to provide them with more support in the future, but they had to close the centre because they’re an independent entity… we’d like to see them stay open, but there were no alternatives,” the minister said.

The 12-bed facility opened in 2003 thanks to federal funding from the Aboriginal Healing Foundation.

Since then, Mamisarvik has relied on funds-per-client arrangements with the GN and Correctional Services of Canada.

TI infused the centre with $500,000 of its own money in 2015 to keep the centre’s doors open, but the current funding model is simply not sustainable, according to Jason LeBlanc, TI’s executive director.

“A residential treatment centre is not financially sustainable exclusively on a pay-as-you-go model,” LeBlanc said earlier this month.

That facility is looking to double its capacity to 21 beds, given the high demand for its services, but at present, Isuarsivik is only accepting Nunavik clients.

For his final question in the house Feb. 25, Sammurtok asked Okalik for an update on “efforts, discussions or plans currently underway to establish a residential treatment centre in Nunavut,” — an idea the GN has been considering for years.

Okalik didn’t provide any concrete details or movement on that front.

“Our government has stated that we’d like to move towards this,” Okalik said.

After Nunavut beneficiaries return to their communities from southern treatment centres, Okalik said the government would like to find out what follow-up treatment they require.

“That way we can plan some time in the future to have a treatment facility in Nunavut,” he said.