Nunavut hunters have used fewer than half of Baffin caribou tags 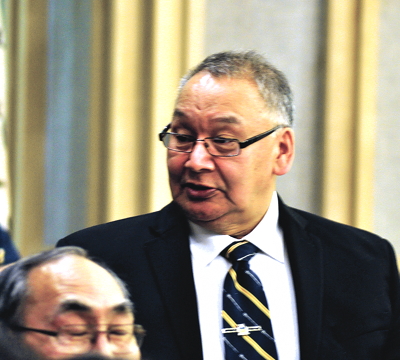 Baffin-region hunters have used fewer than half of 250 tags available for harvesting male caribou, issued by the Government of Nunavut in September 2015 for Baffin Island.

And that’s despite the public outcry against an eight-month moratorium, between January and August 2015 by the GN, to manage the island’s dwindling caribou numbers.

That’s what MLAs heard in the Legislative Assembly in Iqaluit Feb. 24, the first day of the winter 2016 sitting.

Starting in March 2015, Baffin leaders gathered with representatives from the GN and from the Nunavut Wildlife Management Board to set a management plan for Baffin Island caribou.

The number of caribou in the region has plummeted in recent years, from tens of thousands in the 1980s to somewhere between 3,000 and 6,000, according to the most recent surveys.

That sharp decline is likely part of a natural boom-and-bust cycle, both elders and scientists say.

After issuing a moratorium on Jan. 1, 2015 to allow for the development of a management plan, the GN announced in August 2015 that 250 male caribou could be harvested by July 2016.

The Qikiqtaaluk Wildlife Board decided to distribute those evenly to eight communities on the island — giving each community 30 tags.

The QWB gave Igloolik, under the board’s jurisdiction but connected to the mainland, only 10 tags because of that community’s access to Kivalliq region’s caribou herds.

Each community’s caribou quota is administered by local hunters and trappers organizations.

Enook asked Mike what communities can do if their hunters have exhausted their quota.

“In Baffin, the QWB distributes the quotas for each community… QWB is the one that provides the information on how they should be used,” Mike replied.

When Enook asked the same question again, Mike said: “We approved 250 tags to be used for male caribou. If they are all used up, 250 tags will be renewed in July,” according to a written transcript of proceedings on Feb. 24 issued by the assembly.

Mike’s response according to the live translation of those proceedings differed slightly, ‘though.

“We’ll probably be approving 250 tags again [in July],” Mike said, according to live interpretation of the discussion.