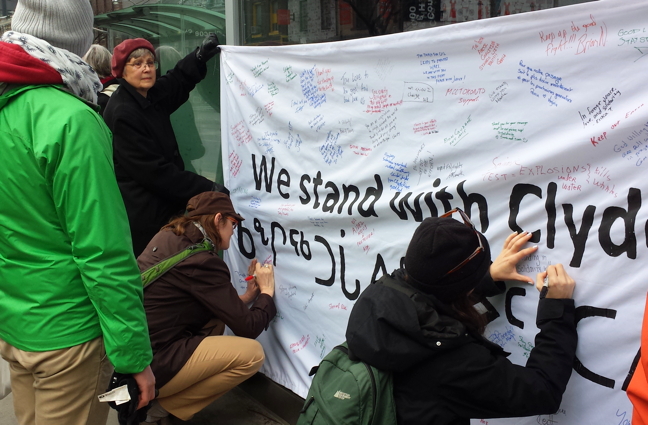 Toronto supporters of Clyde River residents, opposed to offshore seismic testing near their community, sign a banner outside the Federal Court of Appeal last year. The lawyer for those Clyde River residents now wants the Supreme Court of Canada to hear his case, and that of an Ontario First Nation, jointly, because they make similar arguments against the National Energy Board’s natural resource development approval process. (FILE PHOTO)

Nader Hasan, lawyer for the Clyde River group which has opposed seismic testing off the Baffin Island coast, is asking the Supreme Court of Canada to hear his clients’ appeal from a lower court.

And the Chippewas of the Thames River First Nation near London, Ont., are hoping the Supreme Court hears their case against Enbridge Pipelines which wants to modify a pipeline through their traditional territory to allow a larger volume of crude oil to flow across their land.

Both cases are coming before the Supreme Court at the same time, and with similar arguments.

Although the court has not decided yet whether to hear either of them, lawyers have asked that they be considered together.

“Both involve judicial reviews of decisions of the National Energy Board and both involve questions about the role of an administrative tribunal in discharging the Crown’s duty to consult Aboriginal peoples,” says a letter from Hasan filed Jan. 19 with the Supreme Court.

“Considering these two cases alongside each other would give the Court a breadth of factual contexts to consider these re-occurring legal issues of national importance.”

When contacted Jan. 22, Hasan declined to comment publicly on the letter saying that would be inappropriate at this time.

The Clyde River seismic opponents — former mayor Jerry Natanine, the Hamlet of Clyde River and the community’s hunters and trappers organization — are arguing, among other things, that they were not properly consulted prior to the NEB approving a five-year petroleum seismic testing program in Baffin Bay and Davis Strait.

The Chippewas are raising the NEB’s consultation role as well.

“Can the Crown evade its constitutional duty by divesting itself of decision-making authority to approve projects that clearly have the potential to adversely affect the rights of Aboriginal Peoples?” says the Chippewas’ leave application to the Supreme Court, filed Dec. 18, 2015.

“Is this consistent with the honour of the Crown and the high purpose of section 35 of the Constitution Act, 1982, to advance reconciliation?”

If that sounds familiar, it may be because Hasan is arguing the same point in his leave to appeal in the Clyde River case.

In fact, Hasan predicted other cases questioning the legality and legitimacy of the NEB process would likely come forward when he wrote his leave to appeal to the Supreme Court in October 2015.

“Leave should be granted because their current plight is bound to be repeated in similar contexts across Canada until this Court answers certain key legal and constitutional questions of broad public importance,” Hasan wrote.

“As tribunals are increasingly tasked with deciding issues of law affecting Aboriginal rights, the interplay between the duty to consult and the duty of procedural fairness has become an important one.”

Maxime Faille, head of the Aboriginal law group for law firm Gowlings, agreed this issue will keep arising in the courts unless the federal government clarifies the NEB’s roles and responsibilities regarding Aboriginal consultation and accommodation or unless the Supreme Court forces Ottawa’s hand.

“It’s fair to say right now, in light of developments in case law around the duty to consult, that the role of the NEB in that regard really does need to be clarified and these cases present that opportunity to provide some guidance,” Faille said.

The NEB is overseen by nine people appointed by the Governor General on advice from the federal Cabinet. According to their online biographies, five current NEB members have connections to energy and mining companies.

The NEB’s main role is to regulate pipelines, power lines and the import of natural gas, petroleum products and electricity.

Section 35 of the Constitution Act mandates that Ottawa must consult with Aboriginal peoples when development has the potential to impact their traditional livelihood.

But it’s unclear whether the NEB, an appointed body, has the legal authority to do that consultation or, as in the Clyde River experience, to allow the seismic companies to do it for them. And who rules on the quality and parameters of that consultation?

As projects start to creep into Aboriginal territory, especially areas where treaties and land claims exist, the regulatory process has come under fire as inadequate.

The court would perform a great service to Aboriginal peoples, government policy-makers and also development proponents by clarifying who is responsible to do what when development is proposed in traditional Aboriginal territories, said Faille, who represented the Chippewas of the Thames River First Nation at the NEB stage.

It’s to the court’s advantage to hear both cases simultaneously because it adds extra context and legal detail which can help the Supreme Court justices consider their decision, Faille said.

And it helps the Chippewas and Inuit of Clyde River, Faille added, because it proves to the court the breadth of the NEB’s impact on Aboriginal rights, the urgency for legal clarity and the broad public policy issues at stake.

“Their main role,” said Faille, of the Supreme Court, “is to set out broad principles of law and to provide guidance on the law and certain issues of national importance or certain areas of the law that require clarification or guidance.”

It’s been just over three months since Hasan sought leave to appeal for his Clyde River clients. In general, it usually takes the Supreme Court three to six months to consider such a request.

Proponents of seismic testing off Baffin Island, who cancelled their proposed start date in summer 2015 due to legal uncertainty, are hoping to begin their five-year project this summer, during the ice-free season.