“The government’s proposed amendments will further jeopardize our language” 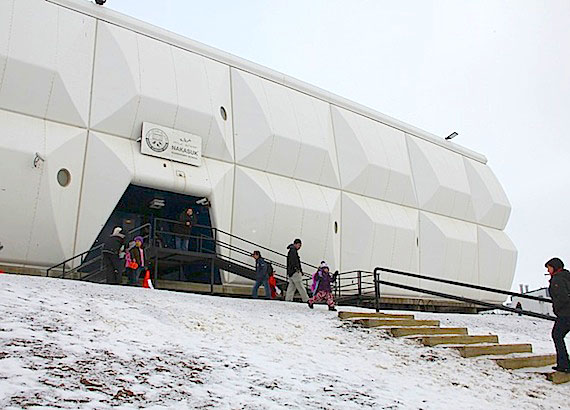 That’s after delegates heard how by 2061 only two per cent of Inuit may be able to use Inuktut as the main language in their homes.

“The government’s proposed amendments will further jeopardize our language. Nunavummiut need a major commitment and investment from government for our youth,” NTI’s vice president James Eetoolook said in an Oct. 20 NTI release.

Eetoolook said NTI wants the GN to act immediately to implement an Inuit Employment Plan to train and hire large numbers of Inuktut-speaking language specialists and teachers in the classroom, as required by Article 23 of the Nunavut Land Claims Agreement.

Implementing an IEP for the education system was to take place in 1994 and again in 2008 so the numbers of Inuit teachers and school officials would reach 85 per cent, he said, but the government has repeatedly failed to do so.

There are currently three times more non-Inuit teachers than Inuit teachers, Eetoolook said—453 non-Inuit to 126 Inuit. As a result, many of the 42 schools across Nunavut have not been able to provide Inuktut instruction for the critical early grade levels, as is required by the Nunavut Education Act, he said.

“This does not create an environment in classrooms where Inuktut can be used or even begin to flourish,” Eetoolook said in the release.

Eetoolook said the GN’s proposed amendments to the Education Act undermine Inuit rights contained in constitutionally protected legislation and policy, including the NCLA, Section 35 of the Canadian Constitution, the United Nations Declaration on the Rights of Indigenous People and recommendations in the Truth and Reconciliation Commission’s final report.

NTI submitted a report on the GN’s proposed educational reforms last month as part of the GN’s education act consultation.

“We have to do something about this right now; today. As Inuit leaders, we will not stand by and watch our young people be pushed out of school and denied their rights by a failing education system,” Eetoolook said at the AGM.

At the meeting, Ian Martin, a language expert from York University in Toronto, also presented language statistics which showed that the number of Inuit using Inuktut as the main language in the home dropped “significantly” between 1996 and 2011.

As a result, Inuinnaqtun is now considered definitely endangered and Inuktitut is now classified as vulnerable according to U.N. language criteria, he said.

Martin said that, if current trends continue, by 2061 only two per cent of Inuit may be using Inuktut as the main language in their homes.

“Schools in Nunavut, which should be part of the solution, are part of the problem. If the 2008 Education Act and the Inuit Language Protection Act were implemented, the majority of schools would now be teaching Kindergarten to Grade 9 in Inuktut. Many schools cannot meet even the minimum requirement to teach Grade 1 in Inuktut,” Martin said.

NTI delegates passed a resolution at the end of their AGM calling on Nunavut MLAs, now meeting in Iqaluit, to oppose the government’s proposed amendments and consider NTI’s recommendations.