“Not enough known” about impacts to marine wildlife 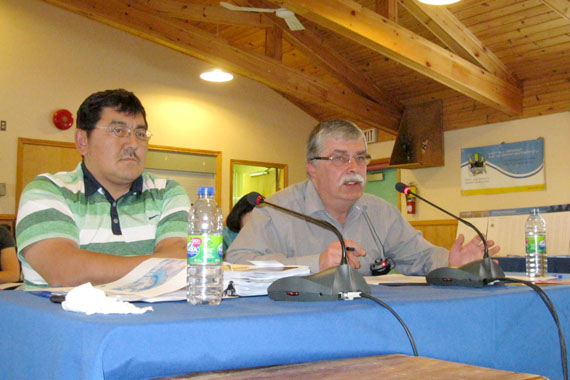 Bernie MacIsaac, director of lands and resources for the Qikiqtani Inuit Association, right, with Cape Dorset representative Olayuk Akesuk, describes the lack of support for oil and gas development among communities of the Baffin region at the association’s annual general meeting, Oct. 11. “We have to take into consideration what people in communities think about this,” he said. (PHOTO BY PETER VARGA)

The potential oil and gas reserves in Baffin Bay and other Qikiqtani region waters may be huge, but Inuit of the region are not ready to support their exploration and production until they know more about the effect such projects will have on their communities.

With that, the Qikiqtani Inuit Association resolved at its annual general meeting that its 13 member communities of eastern Nunavut need more information on oil and gas development in the region before they can support such projects.

Some 20 per cent of Canada’s potential oil and gas reserves are thought to lie in Canadian waters off the east and north coasts of Baffin Island, according to Bernie MacIsaac, the director of lands and resources for QIA.

“That 20 per cent represents $2 trillion dollars, and that’s huge,” MacIsaac told QIA board members on the final day of the association’s AGM, Oct. 11.

MacIsaac told them that Canada’s National Energy Board has long assumed that communities of the region support exploration and development in the area.

But opposition to seismic testing in the region’s waters says otherwise, MacIsaac said.

“Not enough is known about what the impact to marine mammals and wildlife might be in that particular survey,” he said.

This, and lack of answers to questions about possible environmental hazards add up to “non-support” for the project so far.

“People don’t really know what the benefits might be to Inuit in the communities,” he said.

Seven QIA member communities on Baffin Island oppose seismic testing, MacIsaac said, because they fear this will affect wildlife populations — which they rely on for food and fisheries industries.

Board representatives from each of the association’s member communities confirmed those concerns at the annual meeting.

Many said they lacked information on the effect that seismic testing, which involves the use of sound to survey the sea floor, would have on whales and other marine animals.

Other directors pointed out safety concerns, such as the effect of oil spills, and questioned what effect oil and gas development in Greenland, across Baffin Bay, might have on animals that migrate into Canadian waters.

The QIA has consistently pushed the National Energy Board to better inform the communities, “but they haven’t got all the answers to everybody’s satisfaction,” MacIsaac said.

“A seismic survey leads to drilling, and drilling leads to production. So it’s the start of a chain, and we’ve got to deal with it now, before this snowball starts rolling down a hill and we end up with a situation where communities have to react to it as opposed to being involved,” he told board members.

As part of its new policy on oil and gas development in the Qikiqtani region, QIA’s department of lands and resources would call for the federal government to conduct a “strategic environmental assessment” of such projects in Baffin Bay, MacIsaac said.

“This would examine all the issues related to development, and establish what conditions have to be in place before oil and gas (development) takes place,” he said.

“That’s the guts of what we’re working on. That nothing take place until these issues have been dealt with and examined.”