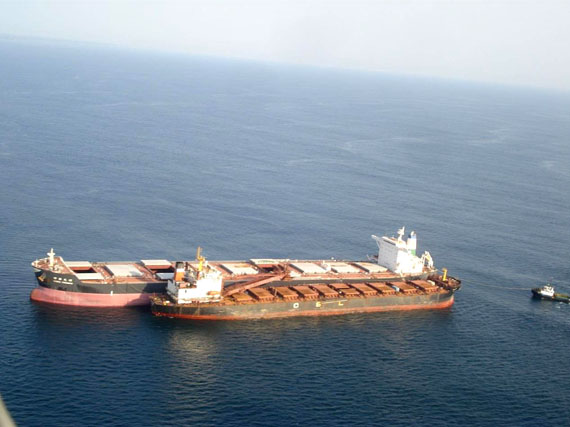 This image, from ArcelorMittal’s iron ore operation in Liberia, shows how the trans-shipment of iron ore works: a smaller vessel comes alongside a larger vessel and loads or discharges iron ore into its hold. Baffinland proposes a similar system for Eclipse Sound and waters off Greenland. (BAFFINLAND IMAGE) 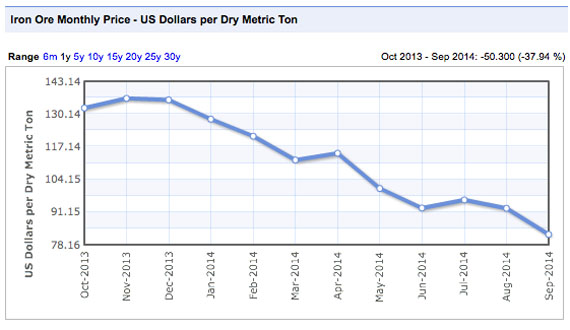 This iron ore price chart, from Index Mundi, shows that the price per metric ton for iron ore dropped by about 40 per cent between October 2013 and September 2014, due to lower demand from China and new product pouring into the market from Australia and Brazil. Some analysts believe the price will drop even further before it bottoms out. (IMAGE COURTESY OF INDEX MUNDI)

Hammered by tumbling iron ore prices, Baffinland Iron Mines Corp. wants regulators to re-write the rules for its Mary River iron mine to allow the shipment of up to 12 million metric tonnes of ore from Milne Inlet for up to 10 months each year.

That’s because, right now, Baffinland can’t raise the $5 billion it needs to pay for a Steensby Inlet railway and port.

In plain language, this means they must ship more ore, more often to their customers to recoup their investment and make a profit from their high-cost Arctic operation in north Baffin.

That’s because global iron and steel producers are getting battered by a double whammy.

Demand for iron ore is falling in China and other places. At the same time, big producers like Rio Tinto, BHP and Vale are flooding the market with cheaply produced iron ore from Australia, Brazil and West Africa, depressing prices even further.

In response to all this, Baffinland filed an application Oct. 29 with the Nunavut Impact Review Board that asks for big changes to the terms and conditions listed in their project certificate. (See document embedded below.)

• an extension of their shipping season from ice-free months only — roughly June to October — to a 10-month period stretching between June and March each year, including the November to March period when ice begins to form;

• an increase to about 150 voyages a year to and from Milne Inlet or Eclipse Sound, which separates Bylot Island from Baffin Island, including fuel and freight vessels;

• the use of two “self-discharging” ore carriers for the trans-shipment of ore to a huge Cape-class vessel in Eclipse Sound and waters off Greenland;

• at least one huge Cape-class ore carrier, and other large vessels which would receive trans-shipments of ore from the self-discharging vessels out at sea, in Eclipse Sound and off Greenland;

• the use of floating fuel storage in Eclipse Sound for refueling of the tugs;

• the use of two new ice management vessels at Milne Inlet;

• a second dock at Milne Inlet;

• refueling of vessels at Nuuk, Greenland;

• a three-fold increase in the number of haul trucks on the Milne Inlet tote road, from the currently allowed 22 to 75.

Baffinland told the review board in its application that its many competitors around the world are usually able to ship iron ore to market all year round, which makes them more attractive to customers.

And many of Baffinland’s competitors benefit from government spending on infrastructure, the company said.

“For many of these developments, existing transportation infrastructure (ports, roads, railway, and necessary utilities) was developed in conjunction with government-backed financing, loan guarantees or World Bank participation,” Baffinland said in its application.

For the future, company still wants to one day build a railway to a port at Steensby Inlet, to the south of the Mary River mine site.

But they said they won’t get financing for a port-railway system until about 2020 and they estimate the first ore shipments out of Steensby Inlet would not start until the last three months of 2024.

At the same time, they propose doing an amendment to their final environmental impact statement that reflects the eventual production of 30 million metric tons of iron ore per year at some point in the future.

That’s an increase from the 22.2 million metric tonnes per year they’re allowed now under their current project certificate.

The 30-million-metric-ton figure is produced by adding the 4.2 million metric tonnes allowed under the Milne Inlet early revenue phase and the 18 million tonnes that would allowed through Steensby Inlet to the extra 7.8 million extra metric tons they seek in their new application.

The company received permission for that early revenue phase from the NIRB just last May.

That required amendments to the company’s original project certificate, which Baffinland received back in December 2012.

This new application would require more amendments to that project certificate, and likely a new round of comments, information sessions and hearings prior to a recommendation from NIRB to the federal government.

But before the NIRB can start that work, the Nunavut Planning Commission must first rule on whether the new proposal conforms to the North Baffin Regional Land Use Plan.

Baffinland is not the only Arctic iron project to suffer from falling prices.

London Mining Plc, the company behind the huge Isua iron mine project in Greenland, filed for bankruptcy protection around the middle of last month, after the company’s Marampa mine in Sierra Leone closed because of low prices and the Ebola crisis.

Baffinland stockpiled its first load of iron ore at Milne Inlet this past September and expects to export its first batch to market in mid-2015.