Judge finds that numerous plaintiffs, cast adrift without a lawyer, still haven’t been properly informed of their rights 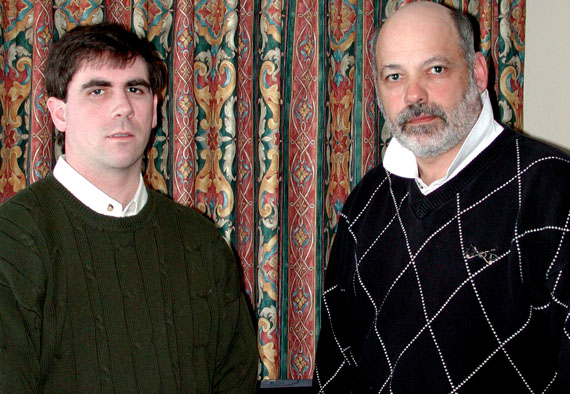 Lawyer Geoffrey Budden of Mt. Pearl, Nfld. (left) and lawyer Stephen Rubino of Margate City, New Jersey in 2001, when Budden, who hired Rubino as a consultant, began a lawsuit against the governments of Nunavut and the Northwest Territories that won $21.5 million on behalf of 82 people in compensation for sexual abuse they suffered as boys at the hands of Ed Horne, a teacher who worked for the GNWT between 1971 and 1985. In 2011, Budden, in a second lawsuit, won $15 million on behalf of 66 people who claimed that Horne had abused them. (FILE PHOTO)

The court battle started in 2015, when Regel filed a lawsuit against Budden, alleging Budden improperly took small amounts of money from dozens of his former Ed Horne abuse clients and improperly charged them for things like HST.

Morton said that puts Regel in a conflict of interest—and therefore unable to represent his clients.

That means the main lawsuit can’t be addressed until Morton’s third party action is resolved.

Bychok said he cannot hear that matter until after Regel’s lawyer, John Rossal, contacts more than 140 Ed Horne plaintiffs involved in Regel’s original suit, informing them of their right to a lawyer and instructing them on how to follow the case

That’s because until the counteraction against Regel is resolved, the Ed Horne survivors have no representation in court.

“This application will only continue once the court is satisfied that all 143 plaintiffs have been advised and had to the opportunity to get independent advice,” Bychok ruled March 29.

Shortly after Bychok issued the adjournment, somebody listening in on the court-teleconference line, over which about seven of Ed Horne victim’s had been listening to the proceedings, let out an angry scream.

The only member of the public in the gallery abruptly stormed out of the courtroom in apparent “frustration,” as noted by Bychok.

Rossal, addressing the court via telephone, told Bychok that “frustrating is hardly the word I would use to describe the process,” during his rebuttal to the adjournment.

Rossal said his firm successfully delivered written notices to about 129 survivors in January, the first part of a planned two-stage follow-up informing them of their rights, upcoming court dates and how to dial into court hearings through a teleconference line.

But Bychok said Rossal’s office failed to give the court enough contact numbers for all the plaintiffs, and the ones they did provide were only submitted by March 10.

That left the court only 12 business days to coordinate with plaintiffs living across the territory and elsewhere.

“The reality for those of us who living Nunavut is that 12 days is not enough time to insure that letters sent from Iqaluit will be received by recipients throughout the territory,” Bychok said.

Of the 143 plaintiffs, the court was given 60 phone numbers, of which only 24 were actually still working, Bychok said.

Because of the short period of time the court had to work with, Bychok instructed court staff to not send physical letters.

“The point of exercise was not just to let them know but also to give them time to find a lawyer, if that was what they wanted to do,” he said.

Bychok ordered Rossal to provide the court with an accurate list of phone numbers, email addresses and residential addresses for the plaintiffs, adding, “its is not up to the court to go out searching for them.”

“Because of the logistics involved, I do not expect that date to be in the near future, unfortunately,” he said, acknowledging that the new development will be frustrating for survivors hoping for a quick resolution.

Regel’s original suit against Budden and his firm, Budden, Morris Law Offices, does not estimate the total amount of money that his clients seek.

But he alleges that the amounts of money that were improperly taken are from the second of two multi-million dollar settlements that Budden won on behalf of those clients.

Rossal and Morton told Bychok that they would be communicate privately shortly after the court proceeding closed to discuss the next steps.