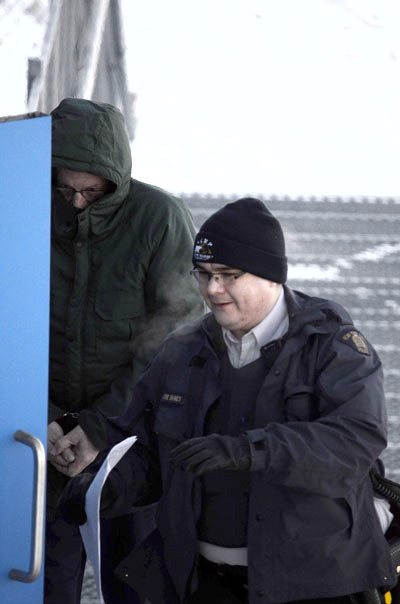 Eric Dejaeger is led into an RCMP vehicle following a court appearance at the Nunavut Court of Justice in Iqaluit. (FILE PHOTO)

Justice Robert Kilpatrick is insisting that the trial of former Oblate missionary Eric Dejaeger be wrapped up, as scheduled, during the week of May 26.

The trial at the the Nunavut Court of Justice in Iqaluit is still in an adjournment — the third break in proceedings since it began five months ago on Nov. 18.

Proceedings were supposed to conclude at the end of the last sitting in March, but Crown prosecutors made three legal applications to the court that created delays and prevented lawyers from wrapping up their final arguments.

Kilpatrick threw out two of those applications in court and he’s now reserving his decision on the third application until after he hears final arguments.

The third application seeks to allow similar fact evidence for all the charges Dejaeger faces — effectively combining all evidence given by the complainants into one package.

Dejaeger originally faced 80 charges, mostly sex-related and involving children. Kilpatrick has since dismissed four of them due to weak evidence, and Dejaeger has pleaded guilty to eight.

Most of the charges stem from Dejaeger’s time as a priest at St. Stephen’s church in Igloolik between 1978 and 1982.

Crown prosecutor Barry Nordin argued that the similar fact application would support the reliability of all the witnesses.

Defence lawyer Malcolm Kempt argued that the witnesses colluded against Dejaeger prior to the trial.

But to consider this application, Kilpatrick will have to pore over 2,000 pages of transcript given by dozens of complainants, something that will require “detailed and laborious consideration,” the judge said in a decision released April 23.

“This will be a difficult and time consuming undertaking,” Kilpatrick said, adding that he will have to repeat the process later when considering “ultimate liability,” in the case.

“While it might be convenient for the parties to receive a ruling in advance of final argument, the court would certainly be disadvantaged by having to prepare two lengthy judgments in circumstances where one detailed review of the trial evidence should suffice,” he wrote in his judgment.

He added that the Crown and defence are not prejudiced and “equally inconvenienced” by his reserving the decision until after closing arguments.