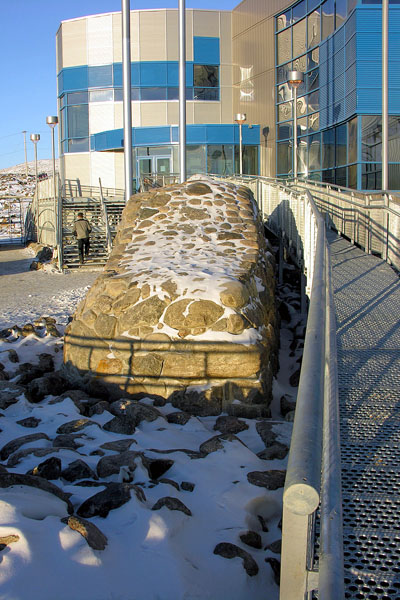 Police violations of suspect’s Charter rights don’t always mean that evidence will be thrown out. Justice Earl Johnson ruled June 14 that about 1.6 kilograms of marijuana that police seized in December 2010 from an Igloolik man can be admitted as evidence, even though police breached the Charter of Rights when they detained him at the Iqaluit airport and searched his luggage. (FILE PHOTO)

Even when police violate a suspect’s Charter right to be free from arbitrary detention and search, sometimes the reputation of the justice system requires the fruit of such searches be admissible in court, Justice Earl Johnson ruled in a judgment issued June 14.

In it, Johnson ruled a large quantity of cannabis seized from a 43-year-old Igloolik man in 2010 may be used at trial, even though two RCMP members breached three different sections of the Charter of Rights when they detained the man and searched his luggage.

“I am satisfied that the exclusion of this evidence would exact a heavy toll on the reputation of the administration of justice in Nunavut and would thwart the efforts to keep drug dealers and their couriers off the streets of Nunavut,” Johnson said in his judgment.

“It would take much more substantial police Charter violations to justify the exclusion of the evidence seized in this case.”

Police seized 1,649 grams of cannabis, the equivalent of 1.64 kilograms or about 3.5 pounds, from the man’s luggage after he arrived at the Iqaluit airport from Ottawa Dec. 9, 2010, en route to Igloolik.

The man, who had no criminal record, was travelling as a medical escort for his seven-year-old daughter.

After detaining the man at the Canadian Border Services Agency office at the airport and persuading him to sign an English-only form consenting to a search of his luggage, police found the marijuana sewn inside a stuffed panda bear.

That occurred after an RCMP member in Igloolik had called Cst. Ian Allen in Iqaluit, saying an anonymous informant of “unknown reliability” told him the man was due to fly to Igloolik through Iqaluit with a large quantity of marijuana sewn inside a teddy bear.

Allen and Cst. Marie Gingras met the man at the Iqaluit airport — but they didn’t have enough information to justify a search warrant.

Instead, they invited the man to join them at the CBSA office next to the Canadian North ticket counter.

There, they asked the man to give them permission to search his bags. To that end, they asked him to sign an English-only consent form.

The man, who has a Grade 2 education and whose first language is Inuktitut, complied with the request, signed the form, and volunteered that he had five joints in his luggage.

Allen and Gingras found the large panda bear inside one of the suitcases, noticed some hand sewing at the back, found the 1,649 grams of marijuana in five vacuum-packed bags, and charged the man with possession of marijuana for the purpose of trafficking.

At a special evidence hearing held Jan. 30 and Jan. 31, the man’s lawyer argued the drug evidence should be thrown out, on the grounds that police breached the man’s Charter rights.

Johnson ruled in his judgment, after a lengthy analysis of case law, that police did indeed breach the man’s right, under Section 9 of the Charter of Rights, to be free from arbitrary detention.

“It was his first encounter with the police and he had a limited knowledge of English… He was scared about what might happen to him if he refused to accompany the police and felt he had no choice but to go with them into the office,” Johnson said.

Johnson also ruled that when they first detained him, police breached the man’s right to contact a lawyer, under Section 10 of the Charter.

But after the the man was formally arrested, police did properly advise him of his right to counsel, Johnson found.

And Johnson found the police search of the man’s luggage breached his right to be free from unreasonable search and seizure, under Section 8 of the Charter.

That’s because the man did not give informed consent to the search.

“It would have been difficult for any ordinary member of the public to fully understand their rights in that short time frame. When you add the challenges posed by the applicant’s understanding of English legal terms I am satisfied that he did not give an informed consent,” Johnson said.

But despite all that, Johnson ruled the seriousness of the RCMP’s breaches of the man’s rights “falls into the lower end of the spectrum.”

“While I have found the consent was not an informed consent, the seriousness of the breach was similarly reduced because the police could reasonably have believed that the applicant was willing to have his luggage searched. They were acting in good faith because the applicant appeared to understand English and never said anything to the officers to suggest that he did not understand,” Johnson ruled.

He also cited the the recent follow-back study on suicide in Nunavut, Learning From Lives That Have Been Lived by Dr. Eduardo Chachamovich and Monica Tomlinson.

That study found cannabis abuse is a major risk factor for suicide in Nunavut.

He also said cannabis abuse is a “big social problem in Nunavut” and that “many people who live in poverty and cannot afford it are spending money on this drug instead of providing the necessities of life to their families.”

At the same time, he said police in Nunavut should get an Inuktitut version of the standard search consent form and make an interpreter available in future.

Editor’s note: Though we are not legally prohibited from publishing the accused’s name, we are withholding it so we can open comments to let readers discuss the public issues raised by this case, while at the same time protecting the accused’s right to a fair trial. As usual, we ask readers to avoid libel, contempt of court, excessively abusive language and deliberate misinformation. We delete all unacceptable comments immediately. All such decisions are final.