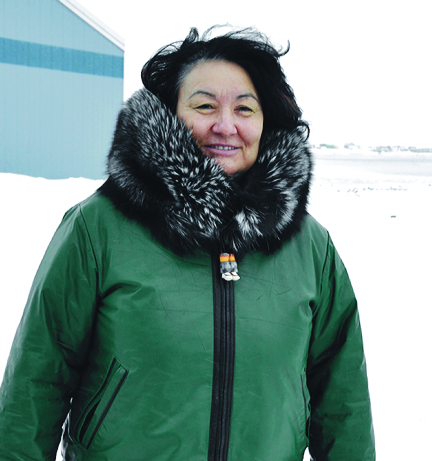 NTI President Cathy Towtongie says the tentative settlement to end a seven-year legal battle over land claim implementation, recently finalized with the governments of Canada and Nunavut, took about a year to negotiate, but was worth it to ensure legal certainty for future beneficiaries. (FILE PHOTO)

Nunavut Tunngavik Inc.’s board of directors voted March 24 to accept a tentative settlement in a lawsuit they launched against the federal government.

NTI President Cathy Towtongie, who just returned March 27 from three days of board meetings in Baker Lake this week, said she was excited and relieved that the agreement, which took about a year to negotiate, may soon become official.

“It’s the Inuit home in Nunavut. This was an agreement that Canada entered into with Inuit. They had obligations,” she said.

“You can’t just sign it and that’s it. The actual implementation, the action of getting those articles into life, that was worth the court case.”

Details of the lawsuit settlement won’t be made public until the other two parties to the deal — Ottawa and the Government of Nunavut — formally accept its terms and conditions.

Towtongie is hoping that happens within the next few weeks.

It’s been a long time coming. The land claim organization launched the lawsuit in December 2006 in an effort to force the federal government into complying with obligations set out in the Nunavut Land Claims Agreement.

On March 20, Ottawa announced big budget hikes for a number of boards and commissions which are products of the land claim, such as the Nunavut Impact Review Board and the Nunavut Wildlife Board.

Part of NTI’s lawsuit claimed that those boards were badly underfunded.

Towtongie said March 27 that although NTI was criticized by many for taking Ottawa to court and spending more than seven years embroiled in a costly legal battle, she feels it was important for future generations of beneficiaries.

“We the Inuit have surrendered for all time, including rights of our unborn children, to make an agreement with Canada. And if you are in my shoes, you would be worried about your future generations,” she said. “We need certainty in Nunavut.”

But the land claim lawsuit wasn’t the only important matter on the agenda last week in Baker Lake.

NTI also passed its 2015-16 budget. The board is requesting $44,885,532 from Nunavut Trust this fiscal year, roughly three per cent more than they requested last year, distributed more or less evenly between NTI and the regional Inuit associations.

This is the first year in a while that NTI is requesting an increase for its own operations. It has been holding steady with a budget of around $19 million a year for about five years.

Nunavut Trust is the body that invests, manages and disburses land claim compensation money that Nunavut received from Ottawa. In 2013, according to its annual report, the Trust contained $1.366 billion in invested assets and accrued income.

The hunter support program is still on hold for now.

The program, which contains about $13 million, was temporarily cancelled last year while board members and staff review it to ensure it is “meeting the needs of hunters,” and also that it is sustainable and doesn’t run out of money any time soon, Towtongie said.

Beneficiaries were highly critical of the hunter benefit program, she said, claiming the money was going to benefit members of local hunters and trappers organizations, their families and others in the community who were not full time hunters.

She said people complained that all-terrain vehicles and snowmobiles purchased with hunter support money were simply being used around town for recreation and transportation and that hunters in need were going without.

“We’re looking at the trust deed to see if we can make it better reflect the realities of Nunavut,” she said.

“A lot of Inuit were not happy with it. People who were not professional hunters were getting the items and just driving them in the communities. People saw that and saw that they were not doing a community-wide hunt or supporting the disabled or elderly. That’s not what it’s meant for,” she said.

“It didn’t just start last year. It started years ago and there were complaints right across Nunavut.”

The board is hoping to have the program restructured and ready to begin hunter payments again by 2016, she said.

Another benefit plan Nunavut beneficiaries may be anxious to hear about is the resource revenue trust fund NTI is currently building from money it receives from mining companies exploring on and developing Inuit owned lands.

That fund contains between $4 million and $5 million right now, she said.

Determined to make it sustainable as well, NTI plans to wait until it reaches at least $50 million before consulting financial experts and beginning disbursements to beneficiaries, she said.

Board members also voted to change the executive compensation policy to make the vice-president’s job a full-time a paid position.

The land claim body used to have two vice-presidents but now it has only one — currently long-standing board member James Eetoolook.

While Eetoolook used to receive honoraria when he attended meetings, he had no salary. The vice-president will now have a defined full-time salary ranging from $147,468 to $196,628.

One last item of note from the Baker Lake meetings, Towtongie said the board passed a resolution supporting a standardized writing system for Inuktitut.

She said NTI is following suit after Nunavut’s education minister, Paul Quassa, announced in the legislature March 12 that the GN would be studying such a standardized system to replace Inuktitut syllabics.

She said if Inuit want to preserve their language into the future, it’s crucial they adopt a system of Roman orthography. She said she didn’t expect it to impact local dialects, which would continue to be spoken orally.