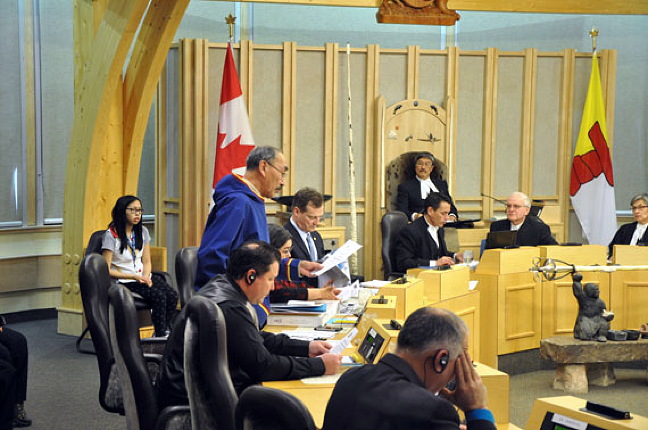 Paul Quassa, Nunavut minister for Nunavut Arctic College, told the legislature June 5 that 86 people applied to Nunavut’s new law program and 25 have been chosen—18 of them Inuit. (FILE PHOTO)

Of 86 applicants, 25 students have been offered, and have accepted, admission into a new four-year law program at Nunavut Arctic College, for a September start date.

Of the 25 Nunavummiut, 18 are Inuit, and the other seven are long-time residents on Nunavut, the Minister of Education Paul Quassa said June 2 during his minister’s statement at the Nunavut Legislative Assembly.

But on June 5, MLA for Iqaluit-Niaqunnguu Pat Angnakak questioned whether this should be considered a success.

“I imagine I am not the only person who is wondering why almost a third of the entering class are non-Inuit. Can the minister clarify why this is so?” she asked.

She then pointed out that an increase in legally-trained Inuit was hoped for to bring an added focus to other areas of law to the territory, such as corporate law and family law.

Quassa told Angnakak that the non-Inuit students enrolled in the program are all long-time residents of the territory.

“Courses we develop are open to all Nunavummiut. The selection committee selects who will be participants and they look at them very carefully,” he said, adding that the applicants had to complete an entrance exam.

“They want capable people,” with applicable skills and “knowledge areas,” he said.

Angnakak then asked how many students accepted into the law program were Government of Nunavut employees, and if they qualified for paid educational leave.

Of 10 future students that presently work for the GN, nine are approved for paid educational leave, meaning they could be paid between 50 and 80 per cent of their salary while they study, Quassa said.

The new law program is to be run in partnership with the University of Saskatchewan’s College of Law.