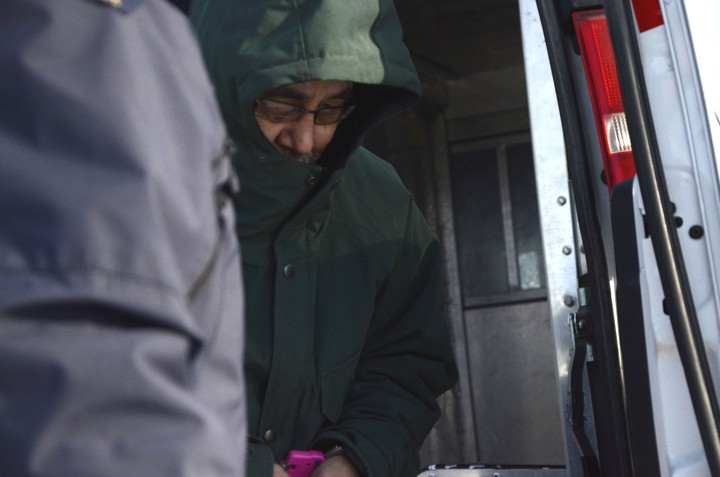 Simeonie Issigaitok, 60, steps out of an RCMP vehicle at the Nunavut Court of Justice March 28, where he was sentenced to two years imprisonment, six years of long-term supervision after that, and deemed a dangerous offender. (PHOTO BY DAVID MURPHY)

Justice Bonnie Tulloch has ruled that 60-year-old Simeonie Issigaitok is a dangerous offender and barred the man from returning to his home communities of Hall Beach and Igloolik for the better part of a decade.

Tulloch sentenced Issigaitok March 28 at the Nunavut Court of Justice to two years imprisonment on top of the 29 months he’s already served in pre-trial custody for sexually assaulting two young boys in 2011.

As well, Tulloch imposed a six-year, long-term supervision order after the two-year imprisonment, requiring him to stay away from the two communities.

Crown prosecutor Barry McLaren laid the dangerous offender application March 24 because of Issigaitok’s 19 previous sexual assault convictions, most which occurred in Hall Beach dating back to 1988.

On Nov. 2, 2011, Issigaitok visited a home where three boys were playing in a bedroom.

The mother of two of the boys walked into the bedroom and saw Issigaitok’s hand down the back of the 10-year-old’s underwear.

The boy then told the mother that Issigaitok had previously rubbed his penis up and down, over and underneath his clothes at other times in the past.

The 11-year-old said Issigaitok had touched him over his clothing once before.

Speaking in the Iqaluit courtroom, Tulloch told Issigaitok he has “scarred” the children for life, and “robbed them of their childhood.”

Issigaitok pleaded guilty to the offence March 2013 because he did not want the two boys to testify in court, defence lawyer David Berg said March 24.

There’s a three-strike rule for offenders who serve penitentiary sentences. In 1997 he served three years, and in 2006 he served two years for sex offences against minors.

This third conviction qualifies him as a dangerous offender.

A dangerous offender is defined as someone deemed too dangerous to live in society and who threatens the life, safety, and the physical or mental well-being of the public.

Tulloch designated Issigaitok as a dangerous offender because he has shown a failure to control his sexual impulses, and “is likely to cause injury, pain, or other evil to others he may come into contact with,” Tulloch said.

But a psychiatric assessment of Issigaitok said risk of reoffending diminishes at the age of 70.

As part of Issigaitok’s sentence, he must:

• attend relapse prevention programs that are made available;

• reside where directed and approved by Corrections Canada; and,

• not return to Hall Beach or Igloolik during the term of the order.

During Tulloch’s oral judgment, Issigaitok leaned on his defence lawyer’s desk and held an interpreting device close to his face with his eyebrows furrowed.

“To be successful, for the next eight years you must become a strong partner in getting better,” Tulloch said.

“You need to fully understand what you have done so that you can finally stop hurting young children. You cannot do that alone sir,” she said.

“I hope that you are finally at a point in your life where you will embrace the help offered so that someday you can return to your family without the urge to hurt anyone.”

Tulloch also told Issigaitok that if did not change, his “chance of freedom will be nothing but a dream.”