“Everything in Iqaluit is growing, except for marine infrastructure” 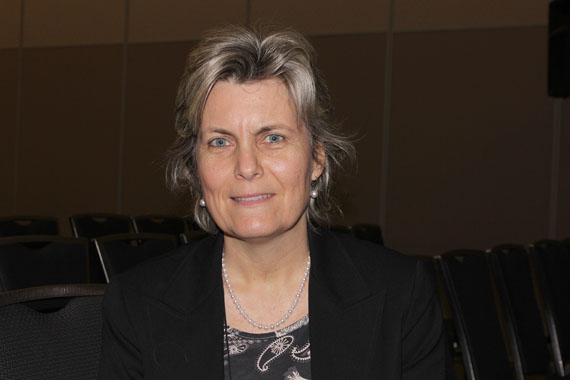 OTTAWA — Suzanne Paquin started with the good news and ended with the bad.

But after the advertisement for NEAS was over, Paquin outlined the kind of barriers the company faces in safely delivering all those snowmobiles and bags of pasta to Nunavut communities — and weather doesn’t top the list.

“Everything in Iqaluit is growing, except marine infrastructure,” she said.

Unlike Nunavik, which has basic marine infrastructure in 14 communities thanks to an $88-million program funded by the federal and provincial governments, Nunavut’s beaches have no docking or causeway infrastructure and no safety or security measures to support Nunavut’s massive and growing annual sealift.

When NEAS leaves the Port of Valleyfield, just west of Montreal in the St. Lawrence Seaway, it must bring all its off-loading equipment with it, including tugs, barges, generators, lights and fencing.

“It’s not easy to work in a mainly unregulated environment,” she said. “It’s difficult to get action even on simple things so on sealift, we have to deliver our own solutions.”

Paquin and others, including Daniel Desgagnés of Nunavut Sealink and Supply Inc., have been lobbying for a refurbished causeway or port in Iqaluit for years with little or nothing to show for it.

They say even just building facilities in Iqaluit would benefit the rest of Nunavut by creating a quicker turnaround time in the capital.

Fellow conference panelist Peter Woodward of the Labrador-based Woodward Group of Companies, added his voice to the chorus.

The Woodward Group owns several companies, including Coastal Shipping Ltd., which provides fuel delivery services within Newfoundland and Labrador and in the Arctic.

He lamented the lack of political will to refurbish the Iqaluit causeway.

“It’s disheartening for me that here’s a dock built by the Americans 50 years ago and it can’t be rebuilt,” he told the audience.

Paquin called the causeway, “an affordable and achievable solution” to diminishing the cost of food, freight and housing in Nunavut.

“We need to work together to make this happen,” she said. “The Iqaluit causeway is a promising pilot project.”

NEAS will be supplying freight transportation for the Iqaluit airport project. The first airport sealift began in 2013, Paquin said, and freight demands for that project will only increase over the next few years.

These kinds of infrastructure projects underscore the need for better marine services, she said. But, she added, there’s fierce competition in Nunavut for scarce dollars.

“It’s about setting priorities for Nunavut,” she said in an interview later.

“Nunavut is a place where the needs are huge. So setting priorities is tough sometimes. Everybody thinks theirs is the priority so things sometimes take a little bit longer to get going.”

In an effort to get a deep water port built in Iqaluit, the Nunavut legislature drafted a plan in 2010 that included two possible design and location options ranging in price from $65 million to $73 million.

But Peter Taptuna, who was economic development and transportation minister at the time, said there is no way Nunavut could afford to build the port without help from the federal government.

The longer the territory waits, the bigger the cost. A 2005 study commissioned by the City of Iqaluit pegged the cost of a port at around $50 million.

In fact, the 2010 draft government proposal said it was the fifth study of a deep sea port for Iqaluit since 1975.