“In the end, I wasn’t surprised,” Jerry Natanine says 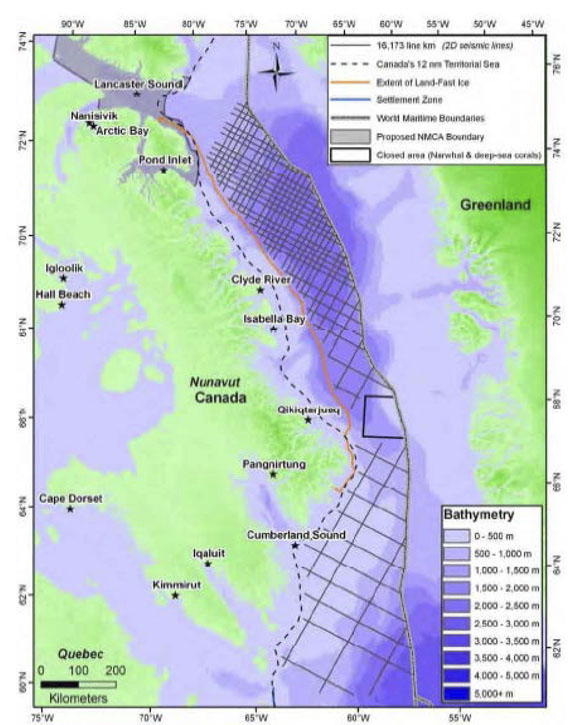 The cross-hatched area of this map shows the maritime territory that will be covered by seismic testing over the next five years. (FILE PHOTO) 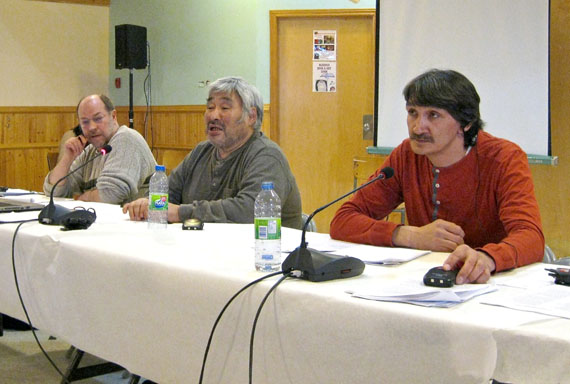 Clyde River mayor Jerry Natanine, right, vice-chair of the 2014 Baffin Mayors Forum, and chair Charlie Inuarak, mayor of Pond Inlet, centre, at the Baffin mayors meeting this past March 4 in Iqaluit. The mayors passed a resolution opposing seismic testing and oil and gas development, in response to a proposal for a five-year seismic testing program in Baffin Bay and Davis Strait submitted to the National Energy Board by a group of related Norwegian companies. The NEB decided June 26 to approve that plan, which many Baffin communities still oppose. (FILE PHOTO)

Discouraged but still defiant, Clyde River’s mayor says even though seismic testing off the east coast of Baffin Island has been given the green light from the National Energy Board, he and fellow Baffin leaders will continue to fight it.

Jerry Natanine said June 27 that he still advocates for a go slow approach to the underwater seabed testing planned for Baffin Bay, off the coast of Clyde River and Pond Inlet, to ensure it’s safe for marine animals and that any future development is controlled by, and benefits, Inuit.

“There was a little part of me that said, these NEB guys, they’re human beings too. They might say no. But in the end, I wasn’t surprised,” said Natanine.

The National Energy Board just approved a project proposal put forward by a group of companies operating under the name Multi-Klient Invest or MKI.

MKI will use an air gun towed by a ship to blast timed explosions into the waters, allowing them to map what lies beneath the seabed by measuring vibrations caused by the air gun array.

That information is often sold to oil and gas companies to help them gauge the potential for exploration.

A meeting of Baffin mayors in March produced a resolution saying that the organization was opposed to seismic testing and oil and gas development at this time.

The Nunavut Marine Council urged the NEB to delay approving the MKI proposal until after the federal Aboriginal Affairs and Northern Development department completed a strategic environmental assessment of the entire area to determine the benefits and risks of resource development.

Bernard Valcourt, AAND minister, said June 23 that he saw no reason to delay the testing since the information would help in the environmental assessment and that he was satisfied with the consortium’s Canada Benefits Plan.

The Qikiqtani Inuit Association got an injunction against seismic testing in August 2010 on the grounds that its safety was not guaranteed and that prior community consultations had not been meaningful enough.

But that concerned an area in Lancaster Sound, which falls inside the Nunavut settlement area.

In fact, it would be difficult to find Nunavummiut who publicly support the proposal.

Natanine said Nunavut MP and environment minister Leona Aglukkaq should be speaking out against this.

“Leona should be saying something,” he said.

“Now we’re getting beat up. We’re the little guys. When I look up, I like to cry to my mom and say ‘help me.’ But she’s not there. That would seem like Leona’s job. And she hasn’t said a word. I’m so disappointed in her.”

He said his hamlet council will meet next week to discuss potential next steps, but added he feels they are running out of options.

“Maybe we could get a court injunction. I don’t know,” said Natanine, who has been invited to speak about his disillusionment with the process at the fourth annual Summit on Public Consultation and Engagement in Toronto in November.

“But we’re going to keep fighting it. We’ll see what we can do, find the best route, and go after it.”

He did say that he was encouraged by the Supreme Court of Canada’s decision June 26 to uphold aboriginal land title in the case of the Tsilhqot’in First Nation in British Columbia.

The decision sets a precedent for cases involving aboriginal claims to traditional land where treaties or land claim settlements have not yet been negotiated with Ottawa.

While that does not apply to Nunavut — where Inuit beneficiaries have ceded their aboriginal title in exchange for rights and benefits contained in the Nunavut Land Claim Agreement — it’s unclear whether Inuit have title to water beyond the 12-mile offshore limit of the land claim agreeement.

Natanine said Baffin Inuit who hunt seal have traditionally used offshore sea ice for harvesting and that it’s likely they have gone beyond the 12-mile limit to do so.

He said he and others plan to explore legal avenues which may uphold Inuit rights to those offshore areas.

During a Canadian Bar Association aboriginal law conference June 19 and June 20 in Iqaluit, two lawyers who specialize in aboriginal law, presented a paper that had been commissioned by Sen. Charlie Watt of Nunavik.

In that paper, lawyers Robin Hamilton and Peter Hutchins suggested that the federal government has ignored Inuit rights in its international bid to claim sovereignty over seabed areas in the Arctic Ocean.

An inventory of traditional inshore and offshore trails in and around Nunavut were recently documented and mapped for an online interractive atlas by Claudio Aporta of Dalhousie University and Fraser Taylor at Carleton University.