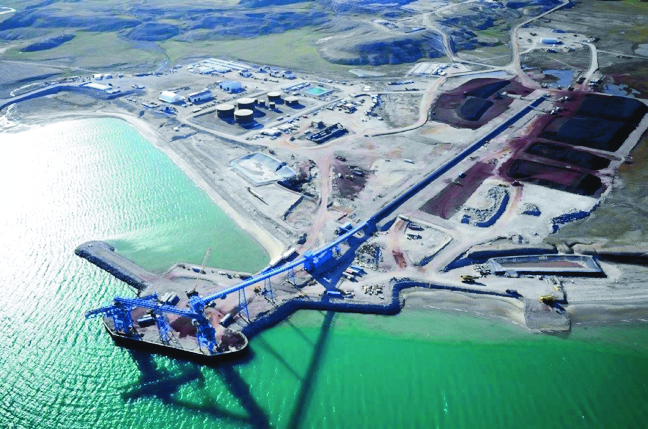 The World Wildlife Fund-Canada says contradictory statements made by Baffinland Iron Mines Corp. on possible winter extensions to its marine shipping season for the Mary River mine should lead to a full environmental review from the Nunavut Impact Review Board.

“Baffinland Iron Mines Corp.’s new plan to extend its Arctic shipping period to Dec. 31 and its expectation to ship during winter months ‘when necessary’ should not be permitted without a full review and public hearings,” WWF Canada said in a Dec. 8 news release.

In November, Baffinland revised its “Phase II” plans for the Mary River mine, dropping a proposal to ship ore by ice breakers through the winter months, replacing it with a railroad that follows roughly the same path as the current tote road used to transports or by truck from the mine to Milne Inlet.

The company said the reversal is in response to growing concerns from the community that ice-breaking transport ships would inflict negative impacts on the surrounding environment.

“In the same letter, despite acknowledging potential harm to sea-ice habitat, Baffinland stated it would instead seek approval to extend the end of its shipping period from October to Dec. 31 “if required,” WWF Canada said.

“Shipping is currently allowed only from June to October [in Nunavut], and the extension has the potential to harm wildlife and habitat during what is a critical ice-formation period.”

WWF Canada said the potential increase of operations in Milne Inlet and Eclipse Sound could disrupt the marine habitat for narwhal, beluga, bowhead whales and seals.

Ice-breaking into the winter season would also interfere with the natural freeze up, creating new fractures in the ice sheet that could create instability.

Delaying the freeze up with icebreakers could also postpone whale migration to winter grounds and increase the risk of them becoming trapped, WWF Canada warned.

“Baffinland has done well to consult with communities and listen to peoples concerns, but there is more work to be done,” said WWF Canada’s vice president of Arctic conservation, Paul Crowley.

“The shipping extension and increased volume during the open water season, combined with proposals for a new rail link, emphasize the need for a full review by the NIRB.”

WWF Canada stated it is not opposed to mining or other developments that add jobs and improve the Nunavut economy, but “it must be done in a matter that takes into consideration wildlife, habitat and the people who depend on them.”

The wildlife organization is calling for a “comprehensive monitoring network” to track any impacts from the Baffinland project, as well as ice-thickness cutoffs for shipment by sea.