“They’re trying to accommodate Pond Inlet to the best of their ability. I give them credit for that” 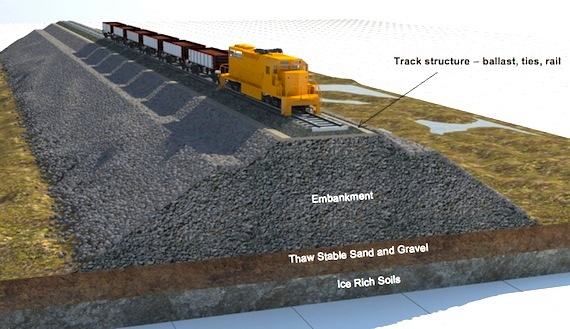 This illustration from Baffinland’s original environmental impact statement, which proposed a railway from Mary River to Steensby Inlet, shows the kind of embankment that would have to be constructed for an Arctic railway to deal with permafrost. They’re now proposing a railway that would follow a different route—Mary River to Milne Inlet—along the current tote road corridor.

Baffinland Iron Mines Corp., which operates the Mary River mine in North Baffin, has scrapped its plans for winter icebreaking in Eclipse Sound.

The mining company had been seeking an amendment to the North Baffin Regional Land Use Plan to permit limited icebreaking so they could bring in a maximum of two winter sea lifts of freight from December to February.

“Baffinland has reviewed the comments submitted by the parties and has considered the concerns expressed by the community of Pond Inlet,” wrote Todd Burlingame, vice-president sustainable development for Baffinland, in a letter to the Nunavut Planning Commission.

“A lot of people don’t realize that Baffinland has really, in my opinion, tried to accommodate the community of Pond Inlet by changing their focus over the years,” Enook said.

Baffinland, currently operating under its early revenue phase at the Mary River mine, first approached the Nunavut Impact Review Board three years ago with changes to phase two of its operational plan. That would have included winter icebreaking and ore shipping, and transforming its tote road, which runs from the mine site to the port, into a railway line.

In September, the NIRB determined that constituted significant changes and bounced it back to the Nunavut Planning Commission to see whether the request conforms to North Baffin’s land use plan.

For more than a year, Baffinland has been scaling back its winter shipping request in response to widespread opposition from Pond Inlet residents, who said icebreaking would jeopardize their ability to travel and hunt on the sea ice of Eclipse Sound.

“Eclipse Sound is our grocery store,” Enook said, “and there was a potential for disruption.”

The company’s final request to the planning commission was for a maximum of two winter sea lifts of freight. But, as Burlingame’s recent letter confirms, the company is abandoning all requests for icebreaking and is now concentrating solely on the railway amendment.

“While some people will state that Baffinland really can’t make up their minds because they keep switching at the spur of the moment, well, we should be glad that they’re switching their focus again because they’re trying to accommodate Pond Inlet to the best of their ability,” Enook said.

“I give them credit for that.”

According to Baffinland’s proposal, submitted to the planning comission in March, the company wants to amend an appendix of Baffin’s land use plan to allow a railway within an an existing, and permitted, road corridor.

Their proposal also includes a possible future “south railway” that deviates from the current corridor in one section. But, for now, the company is satisfied with putting a railway where the tote road currently exists.

The railway would consist of a fleet of five locomotives and 176 rail cars.

“By using a common transportation corridor, impacts to land users as well as wildlife is minimized. Losses of wildlife habitat, sensory disturbance effects to wildlife, and impacts to Inuit land use and harvesting are minimized,” Baffinland’s proposal states.

The company adds that a train is preferable to truck traffic because it’s more efficient and less costly, and would involve fewer trips, cause less traffic dust, improve air quality from fewer emissions and create less noise.

All those potential impacts would eventually undergo scrutiny by the NIRB, should Baffinland convince the planning commission to amend the land use plan.

The Nunavut Planning Commission has scheduled a public hearing on the railway amendment for Dec. 4 and Dec. 5 at the community hall in Pond Inlet.

Enook said he doesn’t have the expertise to assess the railway proposal, but he’s confident that staff with the planning commission and NIRB will do their due diligence.

“That’s precisely why they were created, with the creation of Nunavut. I have to trust that they will do this methodically, with a fine-toothed comb,” Enook said, adding he’s grateful that the land claim ensures input from Inuit and their communities on projects like this.

“At the end of the day, we have a young population and we need jobs for our growing community. We have 1,700 people here in Pond Inlet and I know people here who would never have been hired anywhere else, who are working for Baffinland,” he said.

“But we must do all this with great care for the environment. It’s a fine balancing act.”