Nunavut mining exploration drops off in 2012

Companies spent an estimated $109 million less than in 2011

That figure could partially represent some of the financial loss from the decision of Newmont Mining Corp. to place its Hope Bay mine near Cambridge Bay into “care and maintenance.”

The survey also provides companies’ spending for 2012 at:

“While NRCan provides no details to explain their survey results, we can say that the good news is that mining projects in both the NWT and Nunavut continue to advance through the approvals processes,” said Cathie Bolstad, president of the NWT and Nunavut Chamber of Mines, in a recent news release. 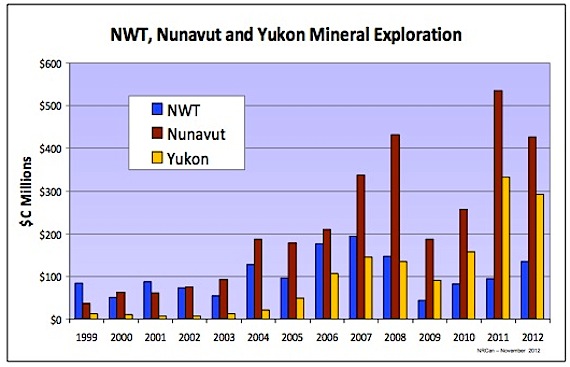 The graph from Natural Resources Canada shows how many millions of dollars mineral exploration has netted for the territories.