Despite desperate shortage, no new housing slated for Nunavut’s capital 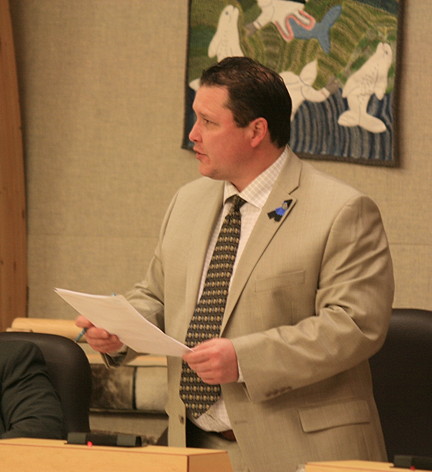 Iqaluit-Tasiluk MLA George Hickes Jr. said Oct. 27 that he finds it hard to believe that the Nunavut housing minister and the Nunavut CGS minister haven’t talked to each other about the land shortage in Iqaluit, which prevents the Nunavut Housing Corp, from building new units in the community that suffers the greatest core need for housing. (FILE PHOTO)

Despite Iqaluit’s “crucial need” for housing, no new staff or public housing projects are slated for the 2016-17 fiscal year because of land availability issues.

And two cabinet ministers who could be working together to solve those problems haven’t had a single conversation on the topic, Nunavut MLAs meeting in Iqaluit heard Oct. 27.

Those two ministers are George Kuksuk, the housing minister, and Johnny Mike, the minister of Community and Government Services.

Iqaluit-Tasiluk MLA George Hickes asked Mike during question period about what discussions the two ministers have had on the issue.

“I haven’t heard from the Nunavut Housing Corporation in regard to the land [availability problem],” Mike said.

“All I’ve heard so far [is] through the media about the land development issue.”

Kuksuk actually provided the information Oct. 22 in the Nunavut legislature’s committee of the whole, when he introduced the housing corporation’s capital budget for 2016-17.

Kuksuk said in his introductory statement Oct. 22 that because of the City of Iqaluit’s shortage of developed land and restrictive zoning bylaws, no new social housing or staff housing projects are scheduled for Iqaluit.

“This has been such a crucial need on an ongoing basis,” Hickes said later, on Oct. 27.

“I find it hard to believe… that there hasn’t been some dialogue, whether it be at the cabinet table, a ministerial discussion or from the community.”

Unlike Nunavut hamlets, the tax-based City of Iqaluit has a municipal lands department that is responsible, under the oversight of city council, for creating new subdivisions.

In all other communities, Mike’s department is directly responsible for developing land.

But CGS could help Iqaluit with the problem, Mike said Oct. 27.

“If there’s land issues with other departments, I am willing to work with cabinet,” he said, adding that since he became minister of CGS in April he’s “rarely heard about the land issue” in Iqaluit.

But Hickes seemed incredulous that the issue hasn’t been discussed between the ministers.

“If your community is in the greatest core need at the time of allocation, then it will receive housing construction,” Hickes read from material provided by Kuksuk.

According to Kuksuk’s own numbers, the wait-list for housing in Iqaluit is at 72 per cent of the NHC’s current housing stock in the city.

That means to meet the current demand for housing in Iqaluit, based on the wait-list, the NHC would have to increase its current stock of housing in the city by 72 per cent.

“There have been some discussions of the delay of the Road to Nowhere subdivision, and there has been some speculation that the city deficit is contributing to the delay,” Hickes said.

Hickes pressed Mike on how much priority CGS attaches to the Iqaluit land availability issue.

“I will look into it and I will provide some information,” Mike replied.

Six Nunavut communities are slated to get new public housing units during the 2016-17 fiscal year: five units each for Arctic Bay, Gjoa Haven, Igloolik and Kugaaruk; and 10 units each for Pond Inlet and Naujaat.