Nunavut MLA wants to know if raven feces cause cancer

“Is this not a danger? I think a study should be initiated” 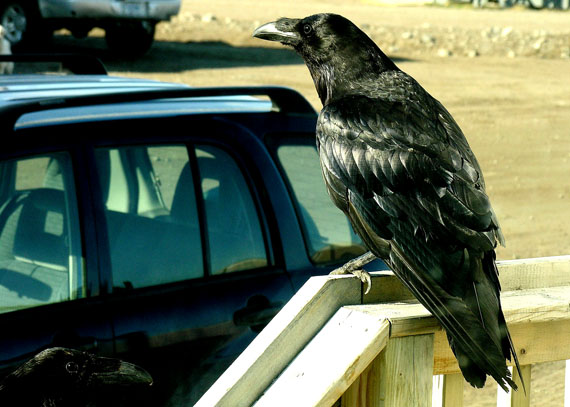 A raven perches on a railing outside an Iqaluit house early on a sunny summer morning. Do raven feces cause cancer and other diseases? Pauloosie Keyootak, the MLA for Uqqummiut would like to know. (FILE PHOTO)

Nunavut MLA Pauloosie Keyootak suspects the trickster raven might be playing fatal pranks on Inuit in a most filthy way—with its own feces.

The member from Uqqummiut used a member’s statement at the Legislative Assembly in Iqaluit Feb. 22 to sound the alarm on what “many of you may not have thought about,” but what has been his “concern for a long time.”

“Ravens drop their feces on our doorsteps and our entrance-ways, right along the paths we use. We then enter buildings after stepping on their feces. Is this not contributing to the increase of illnesses [in Nunavut]?” Keyootak asked, his message televised across the territory.

“Is this not a danger? I think a study should be initiated. There are too many ravens.”

Keyootak did not provide any anecdotal or other evidence for his concern.

But the MLA, elected to the legislature in a 2015 byelection, pointed to the raven as a possible explanation for some of the most serious diseases afflicting Nunavummiut.

“The number of people who get diseases with cancer seems to be increasing. It’s impossible to tell how they get those diseases,” Keyootak said.

“I don’t think they have thought about the possible impact of ravens,” he said.

“There are just too many ravens in my community.”

Keyootak has been one of the more quiet MLAs during question period since he joined the legislature in 2015.

He won his seat in a byelection to replace former MLA Samuel Nuqingaq, who was booted out by his peers because of chronic absences from the house.

Some scientists raised concerns in the mid-2000s that avian bird flu might make its way to the Arctic.

With another territorial election set for late this year, Keyootak may be focusing on what he thinks could become an election issue: pesky ravens.

“I will be asking questions at the appropriate time,” the MLA said in his Feb. 23 statement, but he has not raised the issue again, as of Feb. 27.

Keyootak formerly served as president of the Qikiqtani Inuit Association.